Lots happening on the fishing and other fronts!

Well I finally got all of my children (all 7) together for my mother's memorial service. The pictures in the background are of my mum. 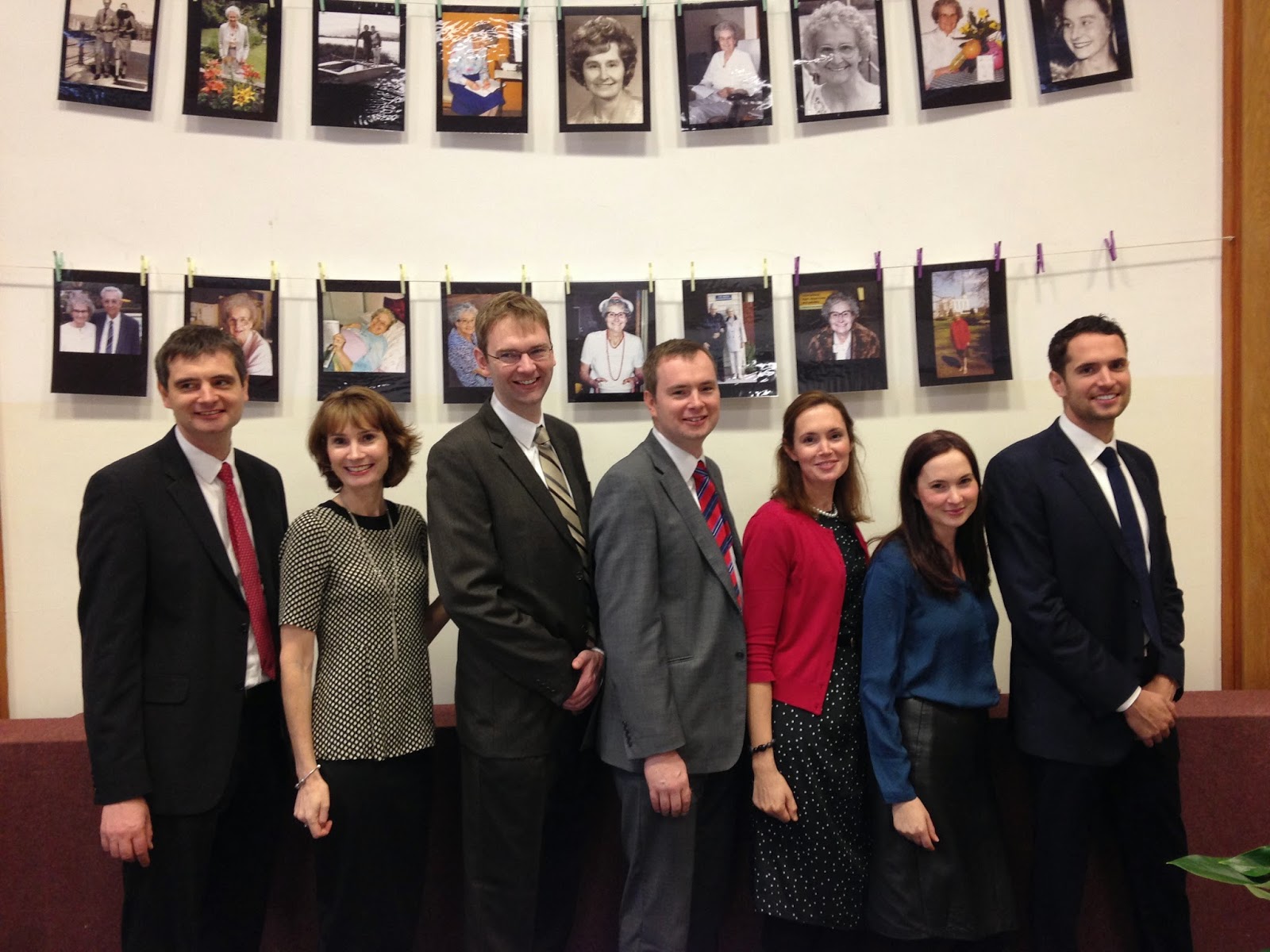 Then I managed to take my son Daniel (the tallest at 6' 10" who had flown in from the States) fishing in a boat at Bewl. He even managed to land a big one, with a bit of help, whilst wearing gloves! 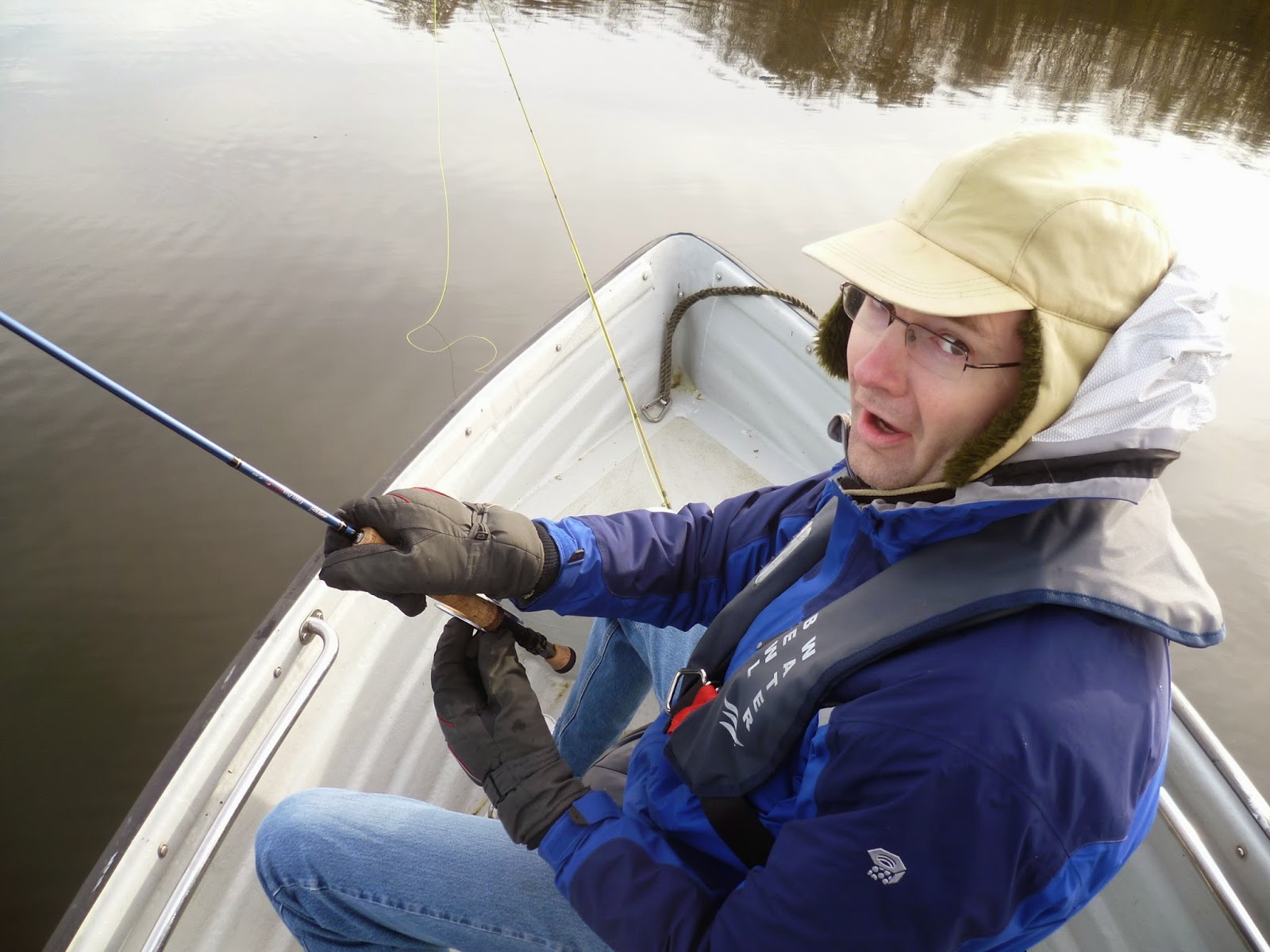 My pal Malcolm was in the boat with us spinning!  I am pleased to report I caught 50% more fish on the fly than he did spinning.  Well, OK he got 2 and I got 3!
Then I slipped down to the Salisbury and District waters to tackle the grayling. The fishery manager, Andreas recommended I try the Laverstock Fishery on the River Bourne and as I had never fished there I decided to give it a go.  In spite of the recent rains it was running beautifully clear, so clear, I kept spooking the fish.  Also I had failed to bring my box of size 18 grayling flies with me so I was fishing nymph that were too big. The net result, well there weren't any "net" results as I blanked.  However, I did get to wade the river and to find the official access by the bridge (the map in the Year Book is a bit misleading).  In the afternoon I fished the Avon at West Amesbury.  There was a lot of coloured water coming down and I blanked there as well.  On the positive side I did see all the work the river keepers had been doing.  I particularly appreciated the plastic matting covering the boggy patches.  Well done! 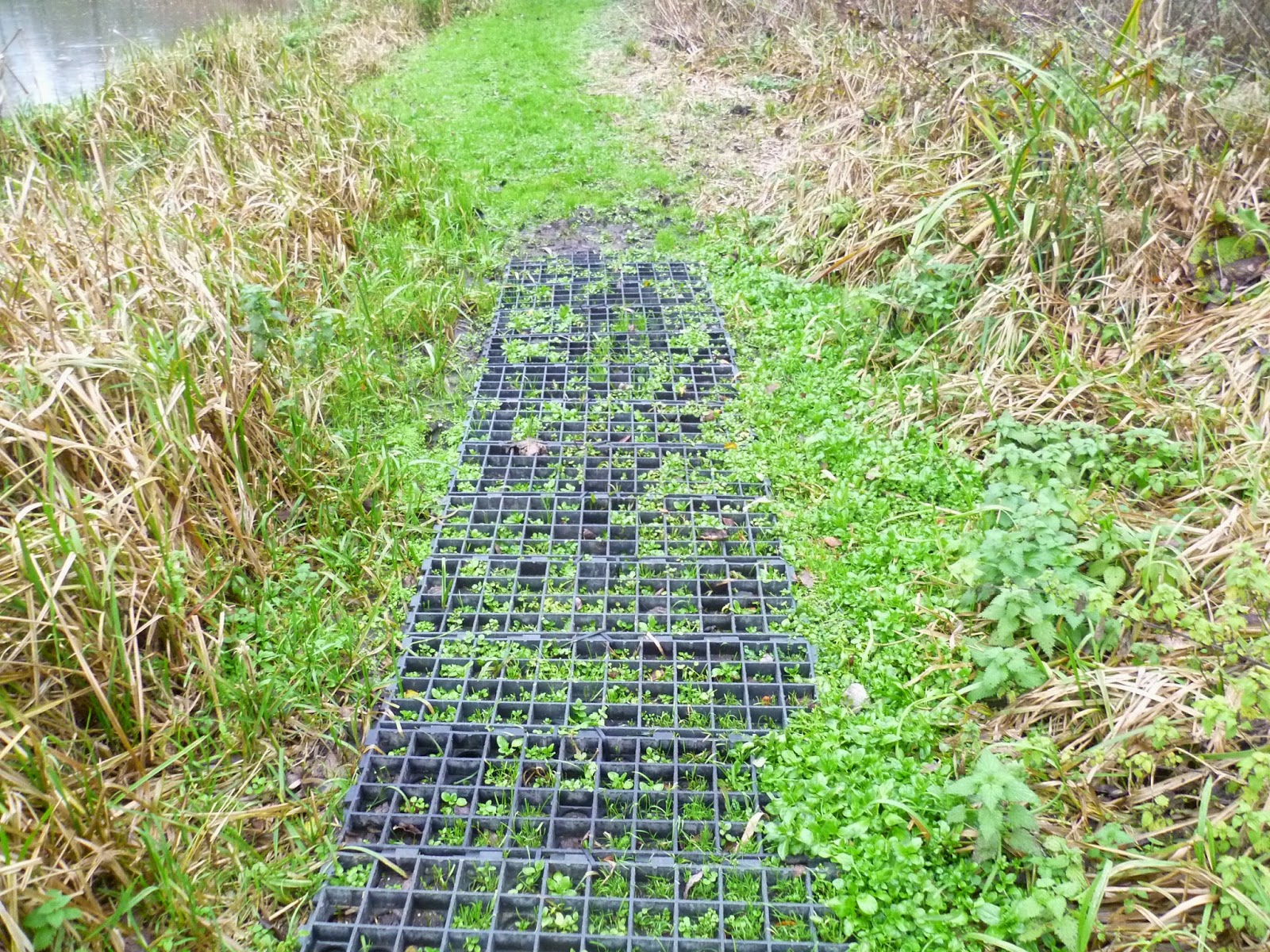 I made up for my disappointing fishing yesterday when I took my American pal Bryant to Albury Estates Western Fishery.  We met up with the fishery manager at the lake at Western and had a pleasant chat and he suggested we try Western.  The water was crystal clear and I soon realised that I could, if I looked hard, see the fish cruising 2 to 4 rod lengths out.  It was the dark reflection of the trees on the opposite bank that enabled me to see in the water.  So I was fishing with my back to the road.  I got my first fish fairly quickly.  Then I spotted a fish and cast my blue flash damsel fly to try to get it a couple of metres in front of him/her.  The cast went wrong and the fly dropped behind the fish.  Hearing and feeling the sound, the fish turned and hit the fly. We had a 5 minute tussle and just at the net the fish came off.  I tried several other areas with no luck so I returned to where I could see the fishing.  I found that having spotted one, if I took my eyes off it, even for a second or two, I would lose it visually.  So I tried to retrieve and cast all the time, keeping my eyes on the fish.  The next encounter was pure text book stuff.  I saw, I cast it took and I caught, but not quite!!!.  When it saw the net the fish took off and surprise, surprise the hook broke on the bend.  Meanwhile I kept an eye on Bryant, occasionally offering tips on how he could improve his casting.
Then I spotted a large fish well out from the bank. Knowing I had to extend my back cast in order to get the distance on the forward cast I checked out the trees behind me and positioned myself to take advantage of a gap.  Double hauling like crazy I deliberately cast well behind the fish as I was just gauging the line length required.  Having adjusted to get that right I went for the big one landing the fly about 3 metres in front of it.  I then lost sight of the fish and gently retrieved using a slow figure of eight.  My arm was wrenched forward and I was on.  The fish quickly took me back onto the reel and the rod bent through 90 degrees.  I recovered line as it ran towards me and then it made for the protection of branches that hung in the water.  I tightened the clutch and managed to turn it back into open water.  Some minutes later it was in the net and on the bank.  It was a cracker and I was chuffed. 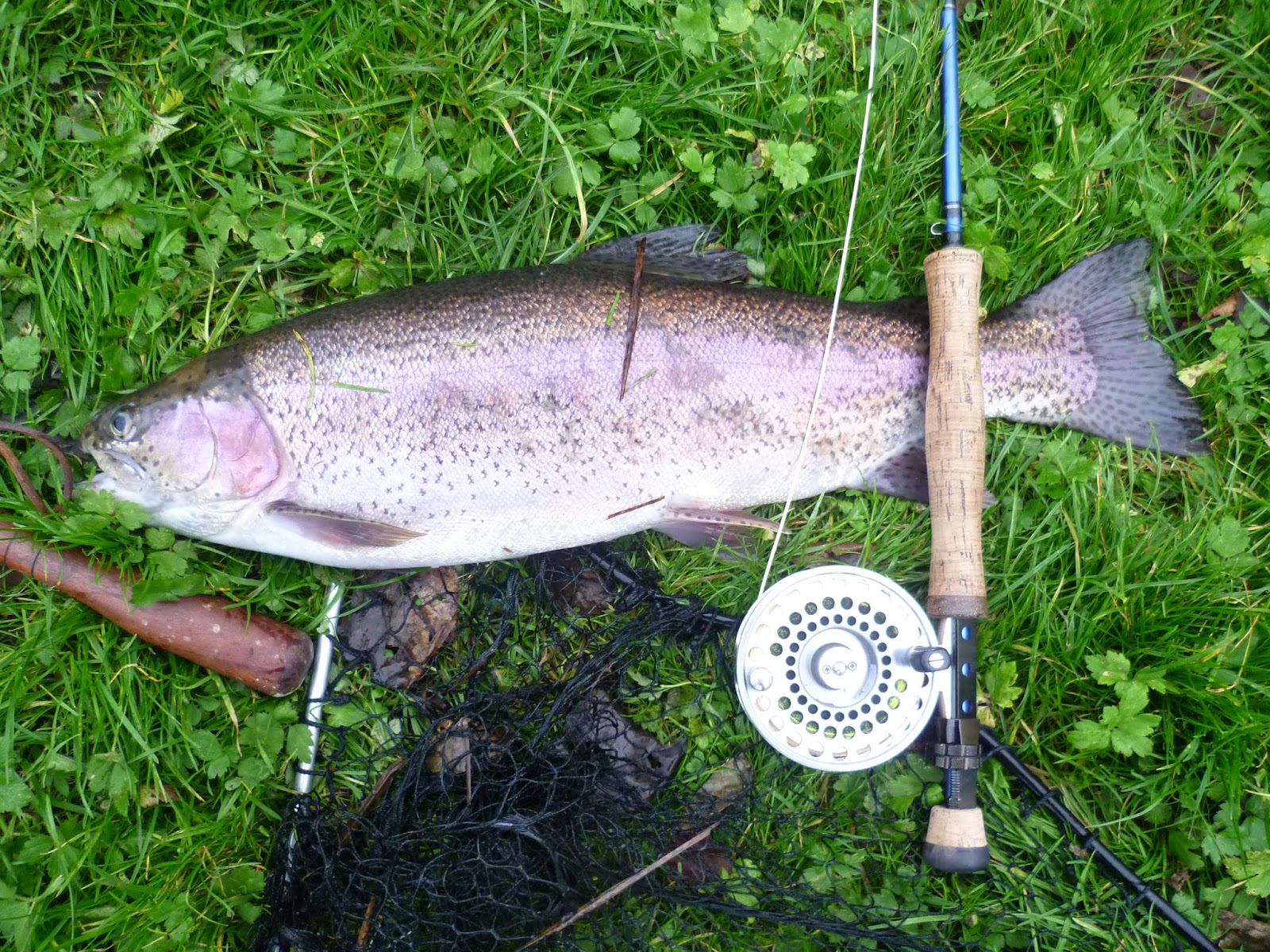 It was exactly 5lb in weight and perfect 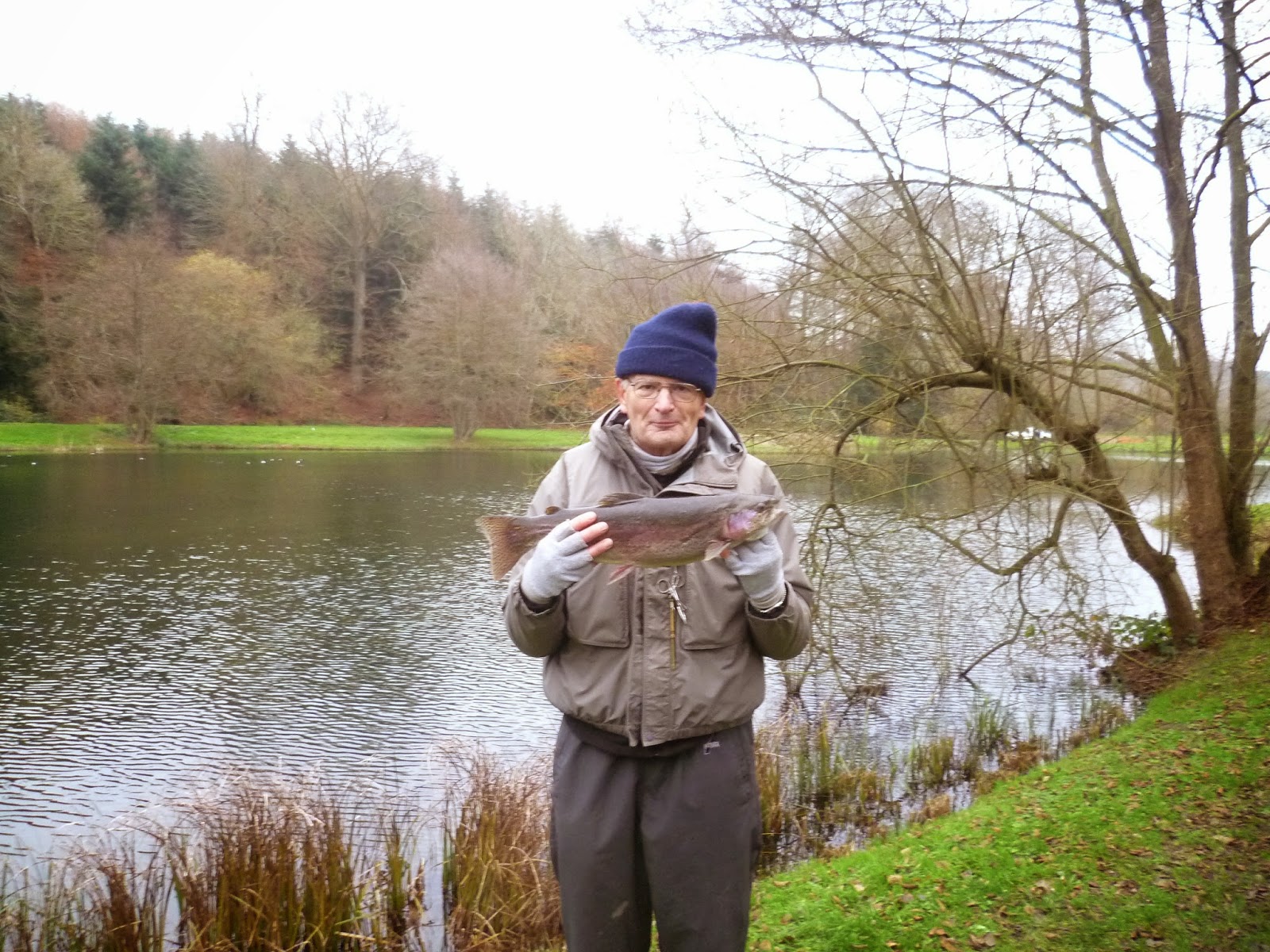 Just to prove it was me who caught it.
Whether river or lake, sight targeting fly fishing gives me the most satisfaction.  Well done Albury Estates, we had a great time.