So long and thanks for all the fish!

One of the funniest and most imaginative books I have ever read is The Hitch Hikers Guide to the Galaxy by Douglas Adams. The sequel "The Restaurant at the End of the Universe" is equally good as is the last book in the series the title of which I have chosen as the title for this post.  This post title was suggested by my son Daniel who thought I should blog about my experiences fishing when I lived in Gibraltar where Daniel was born. So here goes......

One day whilst working as a draughtsman in Croydon for the government I heard that they urgently needed a draughtsman out in Gibraltar. I phoned staff management Thursday pm, Friday am they said they had checked my file and I met the criteria and I had to let them know first thing Monday morning if I wanted to go.  I went home to Rosalind and our two young children (Jason and Rachel) and shared the news.  We sat down with a blank sheet of paper and listed the pros and the cons.  On balance we decided that we should go, but having found out that there was not a branch of our Church on the Rock and the border with Spain was closed we decided to fast and pray to know if that was the right decision.  We got our answer and so Monday morning I made the call and a couple of weeks later I flew out by RAF Britannia as the advanced guard leaving Rosalind behind with lots to do!

So having sketched in the background, now to cut to the chase which involves fishing.  There I was practically surrounded by the sea having brought my sea fishing tackle with me.  So I started fishing from the North Mole (a mole is a big quayside) using slivers of cockle on size 4 hooks and the result was that I caught small fish.  When I spoke to the locals they all said you should have been here 10 years ago, before the Spanish started over fishing the area at night with lights and nets!  So eventually I got fed up with catching, gutting and eating the little fellers so I decided to focus on sailing and squash.  It was not to be as a few evenings later I was standing in front of my naval officers house when a Moroccan chap walked past with a couple of pieces of long bamboo sloping over his shoulders.  What really caught my eye were the two large sea bass hanging out of his tackle bucket!  Wow!  So this chap armed with two pieces of bamboo which he lashes together with a safety pin on the end to make a rod and line wrapped around a coke bottle as a reel is catching decent sized fish.  And there am I with a fibre glass rod and a super Mitchell fixed spool reel catching sprats!  So I resolved to study how the locals fished. 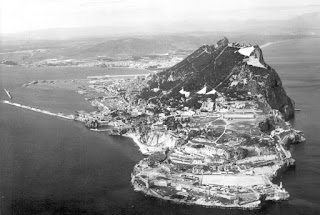 The next morning, a Saturday, saw me out early driving round the Rock looking out for a local  person fishing.  I had nearly given up when I spotted a car parked at the back of the Nuffield Services Swimming Pool.  Sure enough there was a Gibraltarian fishing off the wall above the sea.  I didn’t think much of the location but I pulled in 20 yards away from him and started setting up my tackle.  He had a rod out and I watched him retrieve, bait up and cast quite a long way.  Then he wandered over to chat. When he saw the size of hooks I was using he laughed and told me that was why I was only catching small fish.  He very kindly went to his car and came back with a huge steel hook.  He then showed me how to put a whole cockle on as bait.  He even said you can leave half the shell on as the fish will crush the shell and swallow the lot. By now I was convinced I was dealing with a mad man! Suddenly his rod nearly jumped into the sea and he was sprinting to grab it.  Tightening the drag he gave an almighty strike and battle commenced.  The fish was stripping line off the reel so he re-tightened the drag and then asked me to hold him by his belt as he climbed on top of the sea wall.  For what seemed like an age the struggle went on until the fish, still not seen, was swimming back and forwards right in front of us.  What happened next really surprised me as he gave me the rod saying hold onto him and then running to his car he stripped off to his Y fronts (underwear) grabbed a snorkel, face mask and flippers and ran to the beach where he could get into the sea.  Then he swam round to me up on the wall and grabbed the line where it entered the water.  The next thing he upended and swam down. All I could see were bubbles, flippers and his bottom!  After a minute or so he surfaced and waving to me started to swim towards the beach where he had entered the water.  I followed walking along the wall, feeding him line so as not to slow his progress.  Sadly I fed him a bit too much line and it snagged a rock and stopped his progress, he realising what had happened swam back to free it.  The next thing I saw was him diving down under again and there was more bubble, flipper and bottom activity. Eventually he started swimming towards the beach again and I followed being more careful in terms of controlling the line.  When we eventually reached the beach he staggered out of the water with a 28lb grouper hanging from his right hand, held by fingers in its eye sockets. To try and hold it any other way risks serious cuts from its sharp fins and gill plates.  In his left hand, and trying to climb over his head was an 18lb octopus!! He spotted that when he swam back to free the snagged line.

I did manage to take a photo of Johnny with the fish and octopus but sadly I haven’t been able to find it.  We became good friends after that and he taught me how to catch decent sized fish during my stay in Gib.  That transformed my experience there.