Christmas greetings from Rosalind and Alan to you.


It is that time of year again when we count our blessings and remember all our extended family and friends. As I haven't had the chance to fish or post recently I thought I would share our usual Christmas Newsletter via the blog.  So here are the big events for us this year.


Washington State, USA.  We took the plunge and went to stay with Daniel and Holly for 6 weeks at Redmond, near Seattle, during June and July.  The trip involved babysitting of Erin, Harrison, Rose and Kate, some fishing and a lot of decorating!  However, we did manage to fit in some trips and we stayed at two lovely B & B’s and two amazing Church camp sites. We also saw a huge black bear in their garden!!!


The Move!  No we didn’t move, it was Lorraine and John and their boys, Samuel and Seth who moved after living with us for 2 years.  John had given up his job in central London and taken up a training contract with a law firm at Oxford so they moved to a bungalow near Bicester.  This had a big impact on us as we were able to redecorate, re-model and re-carpet parts of the house!


WelshTrips.  We spent a wonderful holiday in South Wales as guests of Lorraine’s father-in-law, Mark, who kindly took us to see the amazing Roman Baths at Caerleon, the brilliant St Fagan’s Welsh Life Village and a concert.  Alan also went on a long weekend fishing trip in Wales with his pals Rowland, Ian and Andrew.


Most spectacular event!  We were invited to attend the Lord Mayor’s Show by Rosalind’s cousin Fiona Woolf.  Fiona became the second woman to take this role as head of the City of London in 686 years!  Within the City of London only the sovereign (the Queen) takes precedence over the Lord Mayor. Fiona actually arrived at the event in the Queen’s row barge Gloriana. Having had drinks at a reception in the Mansion House, we sat in reserved seats on the balcony and watched the 3 mile long procession of bands, charities, Worshipful companies, soldiers etc.  Then having watched the Lord Mayor arrive in the gold coach and take the salute from her own personal bodyguard, a company of Pikemen and Musketeers, we all had luncheon in the Mansion House.


Autumnal Holiday.  For a reason that will become apparent, we decided to treat ourselves to some sunshine in October.  So we consulted our holiday travel expert, my brother Chris.  He recommended a small, un-spoilt island called La Gomera.  It is the Canary Island, in the Atlantic off the coast of Africa, that mass tourism forgot. Chris also recommended that we stayed at the Hotel Jardin Tecina located on the cliff top overlooking the tiny port of Playa de Santiago. We were not disappointed. I arranged the holiday through Thomson and we flew out from Gatwick in the UK to Tenerife South and then aided by a lovely couple, Muriel and John, from Scotland, caught the Fred Olsen ferry from Los Christianos to San Sebastian on La Gomera.  The hotel consisted of a main building housing the reception, restaurants, bars, sports facilities etc and the 460 bedrooms and suites were arranged carefully around the pools in the beautiful grounds along the cliff top.  My favorite feature was the two modern Otis lifts that took you down to the beach and the salt water pool and another restaurant.  Alan’s favorite activity was his SCUBA diving trip, Rosalind enjoyed the flamenco dancing and the whale watching.


Irene Moe – (Alan’s Mum) is still with us at 93, soldiering on, mainly in bed but a few hours a day propping up a chair in a nice care home. She doesn’t respond much but we do get the occasional smile.


Voluntary Service.  On the 11th November Rosalind and Alan started working fulltime for 6 months as volunteer Ordinance Workers for The Church of Jesus Christ of Latter-day Saints at the London Temple.  Although the Temple is only 15 miles from our home (near East Grinstead) we decided to live on site and just spend Sundays and Mondays at home.  Those reading this who are not members of the Church may be interested in knowing more about our roles in the temple and might like to copy the following link into their browser and have a look:- 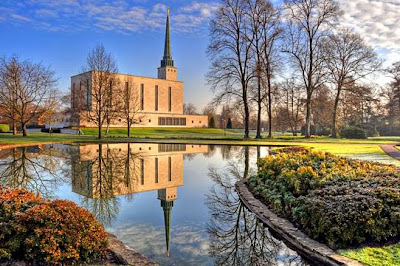 The London Temple
Most of the activities mentioned above are covered in earlier posts on the blog, if you would like more information please use the index on the right to find them.
So let us close by wishing you a wonderful Christmas and a happy, healthy and comfortable New Year.﻿
Posted by Unknown at 07:12