Fly Fishing for Sea-Trout: Adventure at Woodmill on the Itchen

I have called it an adventure because:-
It sounded great fun!

Clive Bruton and I met at the White Swan and had a burger supper.  We talked all things fish  and I soon realised that I was with an expert who had fished his way round the world. This is where I made my first mistake!  I had planned to ensure we got to the water whilst there was still some daylight but I talked too much (Clive wanted to know about steelhead fishing) and we arrived at Woodmill in the dark!  Fortunately, Clive had done it all before and he knew the combinations for the road and pool gates, I got the impression it was a sort of fishing Fort Knox!

In the dark it is hard to judge distance but the pool appeared bigger than I had expected. It was high tide and water was roaring in from two sources, the River Itchen and Monks Brook. At first, and for some time, I had no idea where it was discharging down towards the Southampton Water and the sea.  Clive kindly walked me around and described various features and showed me the "hut" which was more of a shelter than a hut as the front was completely open. However it did boast some seats and a kettle.

Clive then explained that it is harder to catch when the water is high but that was when the bigger fish were caught.  He then shared the technique he had developed which involved a small tube fly on the point "anchored" deeper in the water by a very heavy nymph on a dropper.  I didn't have any very heavy nymphs so I fished a single fly on a fast sinking line to no avail apart from catching the odd tree.  I was having difficulty judging distances in the dark!  Then I graduated up to an intermediate line as fish were showing on the top and the water was dropping.  I also tried the anchor nymph approach using a woolly bugger!

By this time it was around one in the morning and I was feeling a bit rough. The drive down hadn't helped my back and I was feeling sorry for myself.  At one point I sat in the hut drinking soup and thinking "Am I getting a bit too old for this middle of the night sea trout lark"!  Then I told myself that I was lucky to be there and the weather was kind, the moon was down and it was an ideal night so I ought to get a fly on the water.  Then I spotted Clive out in the middle of the pool and realised the tide was well out and a mud/gravel bar had appeared.

Clive modestly told me he had caught a few and advised me to fish a bit deeper and to wade out on the bar and cast under the trees.  By this time I had gone through a lot of the fly box and was currently using a sparse black and silver "Needle fly".  Clive suggested it was too light and he was right because the strong currents were probably lifting it.  As I was running out of time I put a blob of lead putty on the fly's head and cast it under the trees fishing it on the swing.  After half a dozen casts still nothing so I cast straight up current and did a fast retrieve.  BANG!  Fish on, not a big one but sporting enough in the dark to be great fun.  I was so pleased that all the tiredness and back pain disappeared and I came alive.  I quickly removed the hook, took a quick photo and slid a beautiful fish back into the water.  Line tidied and back on station I repeated the process and a few casts later I was in contention again.  This time the fish was a bit bigger at around 2lb, but it thought it was a bird and tried to fly!  A brace!  I was a happy bunny.  When Colin called across out of the gloom saying he was packing up but I could fish on I suddenly realised how tied I was and I decided to quit whilst I could still walk! 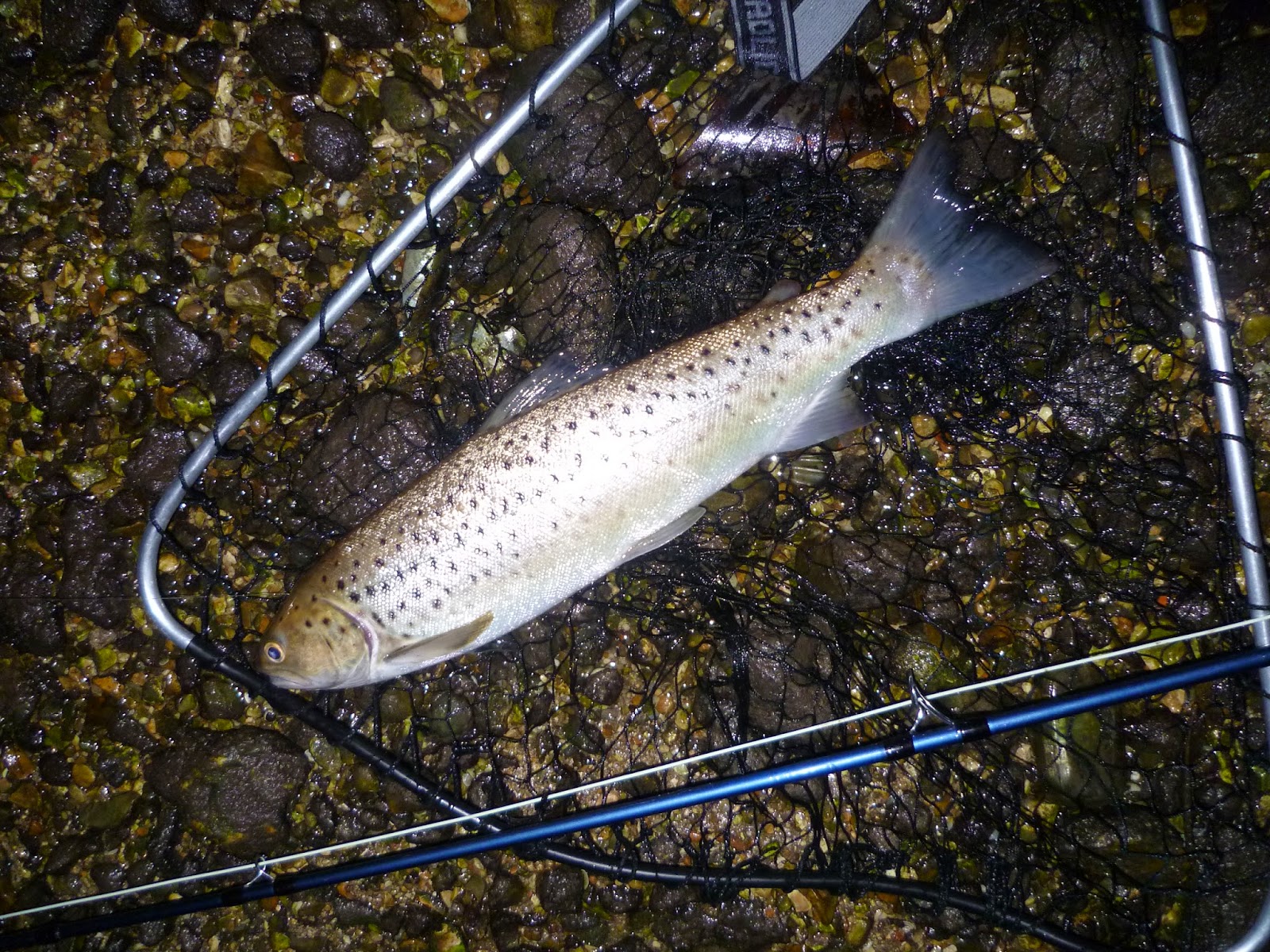 A perfect specimen, not big but beautiful! 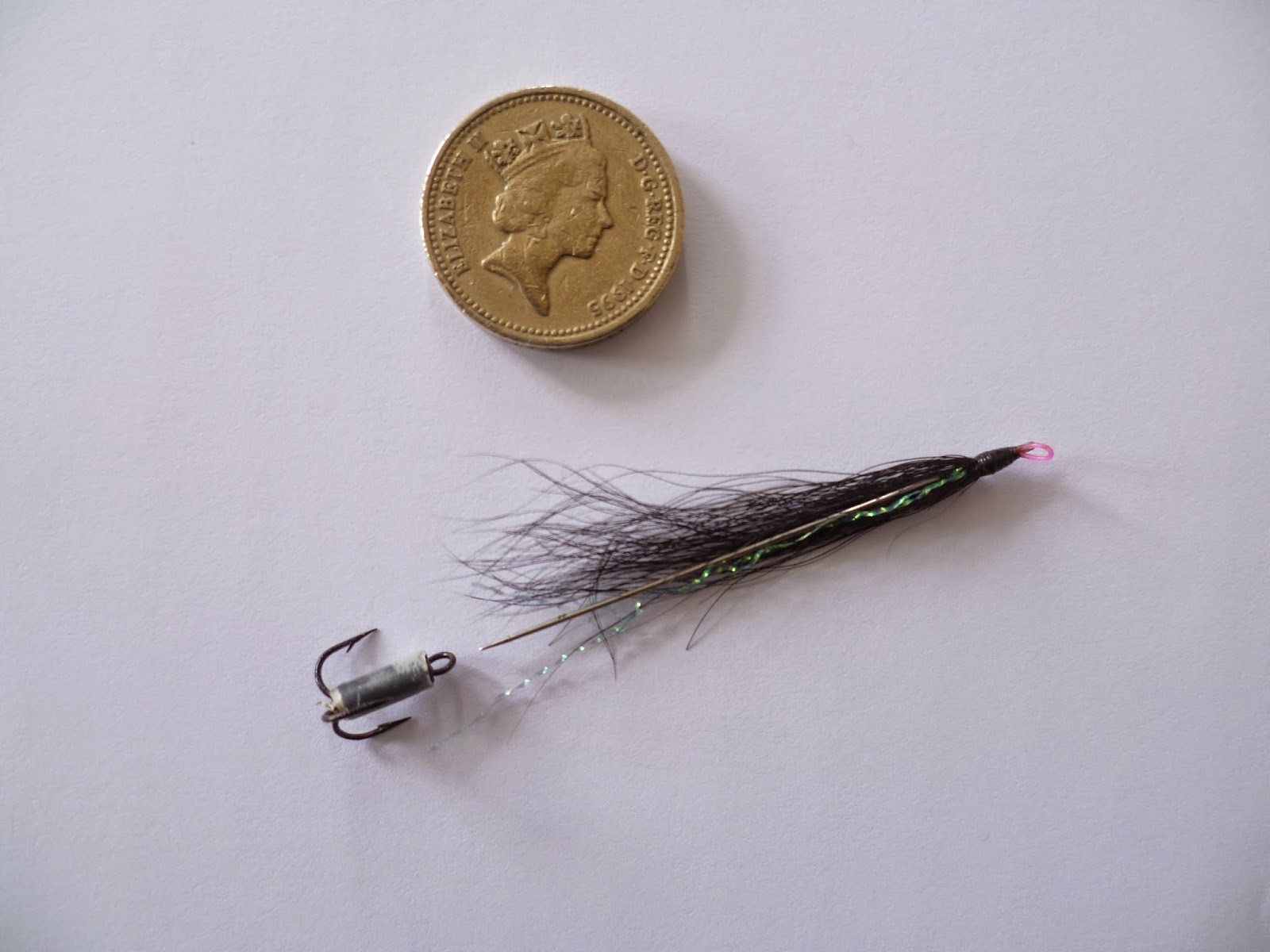 The needle fly that saved the day. The leader goes through the red loop down the side of the sewing needle and ties on to the treble. The point of the needle is then pushed into the sleeve that is over the hook shank.


The final score was Clive 9, Alan 2 but I didn't mind that, it had been a very special memorable night and a bit of an adventure!