Just occasionally we Brits do something really well!

Having seen the news coverage and having friends tell us what a wonderful sight it was my wife and I decided to jump the bus and train and take a look at the major art installation "Blood Swept Lands and Seas of Red" at the Tower of London.  This artistic display marked one hundred years since the first full day of Britain's involvement in the First World War. Created by ceramic artist Paul Cummins, with setting by stage designer Tom Piper, 888,246 ceramic poppies progressively filled the Tower's famous moat over the summer. Each poppy represents a British and Commonwealth military fatality during the First World War.
The poppies encircle the iconic landmark, the castle, known as the Tower of London creating not only a spectacular display visible from all around the Tower but also a location for personal reflection. The scale of the installation intends to reflect the magnitude of such an important centenary creating a powerful visual commemoration.
On the conclusion of the display, the poppies are to be sold raising millions of pounds which will be shared equally amongst six service charities. 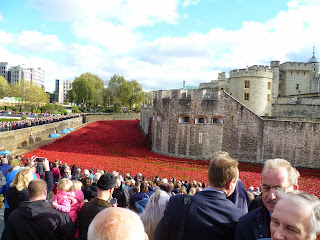 We went there on a Friday around 11.00 am and it was solid with people from all over the UK and the World.  It has been like that for weeks and weeks. 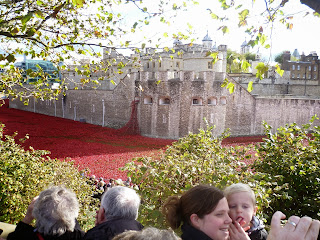 Here is an artistic touch showing the poppies appearing to pour out of the castle.  Just like blood pouring out of some poor soul's body. 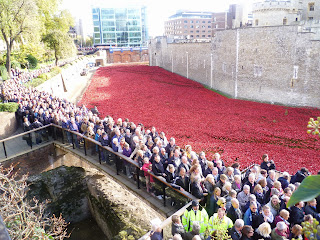 The crowds were quiet and reverent, quietly shuffling along all a bit overwhelmed aware that each poppy represented one of the 888,246 who died protecting our freedom.

We came away quiet, reflective and thankful.  It made me proud to be British.