My friend Rowland and I were fishing Bewl and I thought that the floating booby and hopper techniques of a few days earlier would still work.  However, after an hour on the water drifting over the recent "hot spot" there was no sign of action.  So we motored round to the upwind side of the cages and tied up to a buoy.  We soon noticed that another fly fisher was hitting fish.  Not being proud and wanting to make sure Rowland connected I called across and asked what they were on.  He kindly replied that it was gold head daddies a few feet down. 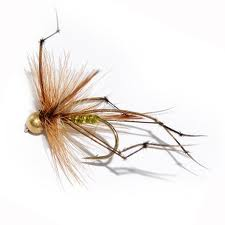 I switched immediately and on my third cast was rewarded with a fish.  Then I went on to have some more takes and I got broken and lost my last Daddy.  Rowland kindly gave me one.  I think he gave it, but he might only have lent it!  Anyway I have still got it! 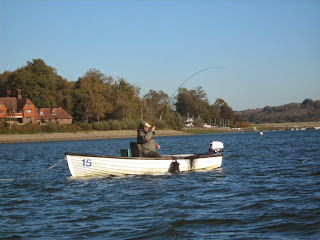 This is the gent who kindly tipped me off as to what to use and how to fish it.  By this time another boat had moved on to a buoy the other side of us and they were immediately into fish. Then a chap with his girl friend turned up.  She must have been very devoted to him because it was quite cool and a bit breezy and bumpy! 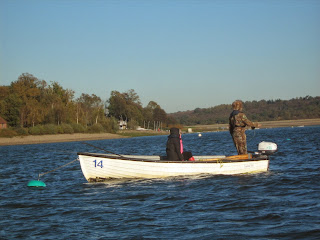 I came away with four good fish and Rowland had his share.  Back at the car I spoke to the guys from the other boat, one had eight fish using a cats whisker and the other had four.  Thinking back I realised that the fish I had caught had all taken the daddy when I was retrieving quite fast.  I think if you retrieve a daddy fast it tends to look more like a lure imitating fry, so maybe I could have caught simply using lures.﻿ 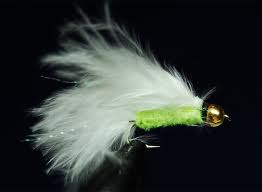 A cats whisker fly
Posted by Unknown at 13:03