I had mentioned that one of the things keeping me from fishing and posting was my fencing project.  I thought it might be helpful if I shared some of the techniques I used and the how I had been able to recycle old pallets into pretty neat picket fencing.

Now in my back garden (called a back yard by my American friends) the fence on one side is my responsibility (as detailed on the house deeds). The fence is about 120 feet long.  The existing fence is a low one not the usual 6 feet solid type.  This we like because it means that we can enjoy our neighbor's flowers and shrubs and they can enjoy ours. However, bear in mind that the following photos were taken in January so don't expect to see flowers. The picture below shows the new fencing bordering the top part of the garden where I have put purchased trellis work between posts.  Along the base of the trellis I had set paving slabs on their edge in concrete. Once everything has grown this fencing tends to be hidden by the plants.  So there was nothing clever about that fence. 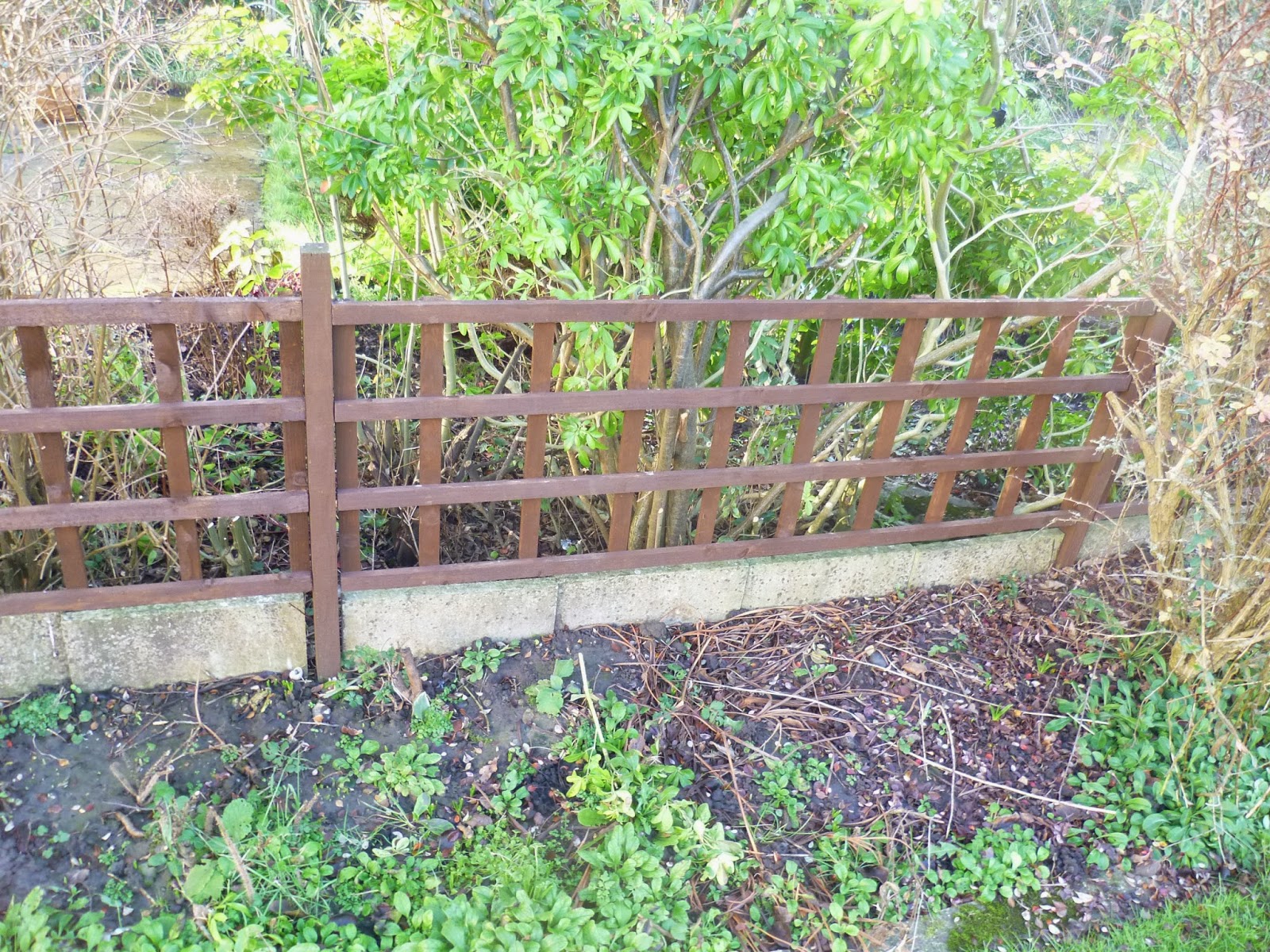 Down at the bottom part of the garden the fence borders my vegetable plot and historically it was pretty basic plastic fencing as the next photo shows. 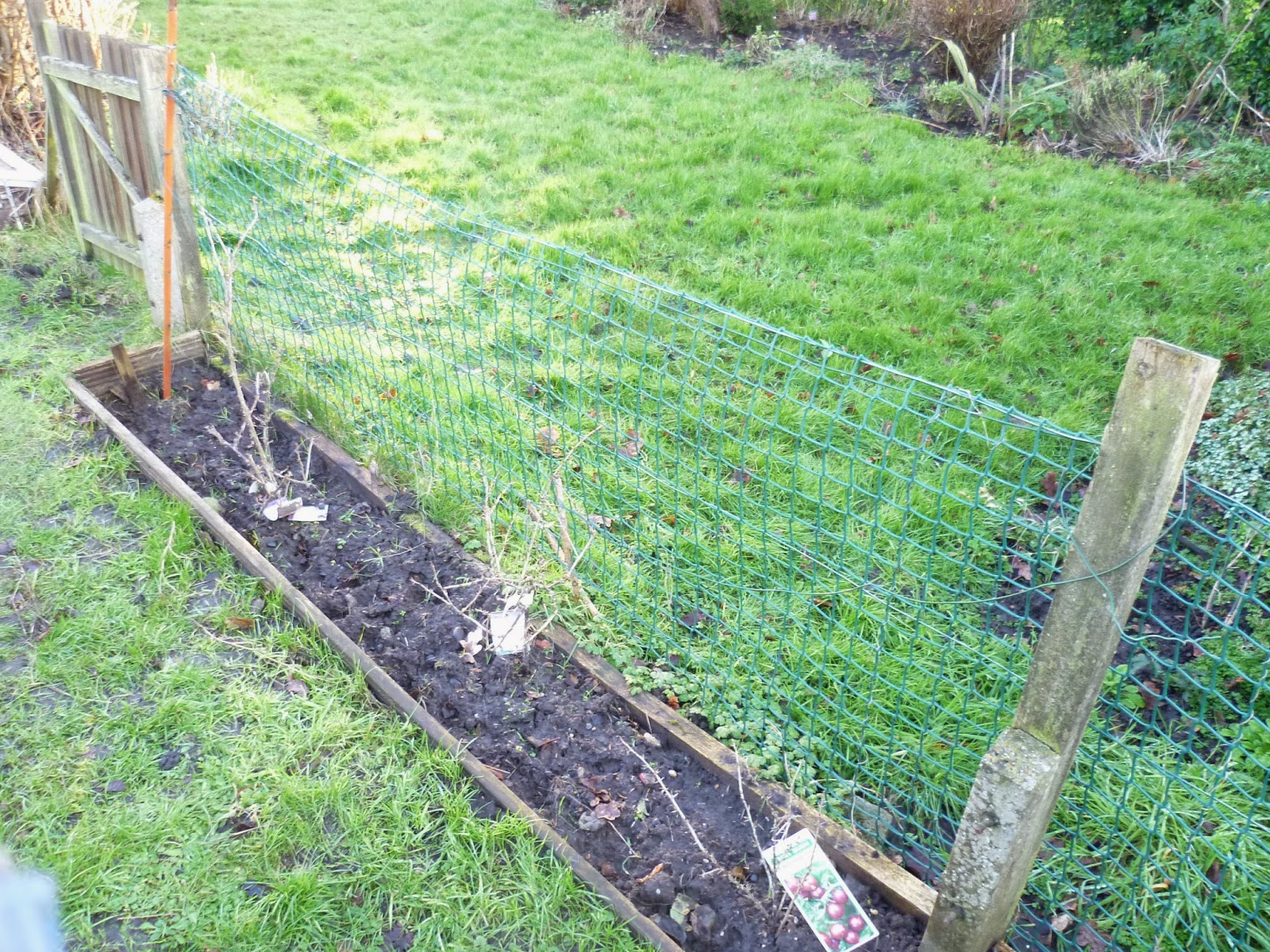 It was whilst looking at a fencing suppliers website that I noticed an advert on the page mentioning recycling pallets as fencing.  That sounded interesting so I gave it a click and watched a video of an American chap cutting up pallets and turning them into fencing.  So I decided to give it a go.  Now previously I had tried to take pallets apart and I knew that, because they were manufactured using ridged nails fired in with a nail gun, you could destroy the wood trying to take them apart.  However, there was a section of fencing (behind my compost bins) where some of the pallets could be used complete if they were just cut to the right length.

In the picture below you can see cutting the pointed fence tops with my pull saw. Incidentally, I had never seen a pull saw until my son Dan had one and gave it to me when he moved to the States. It is my favourite saw as it always cuts easy and clean. 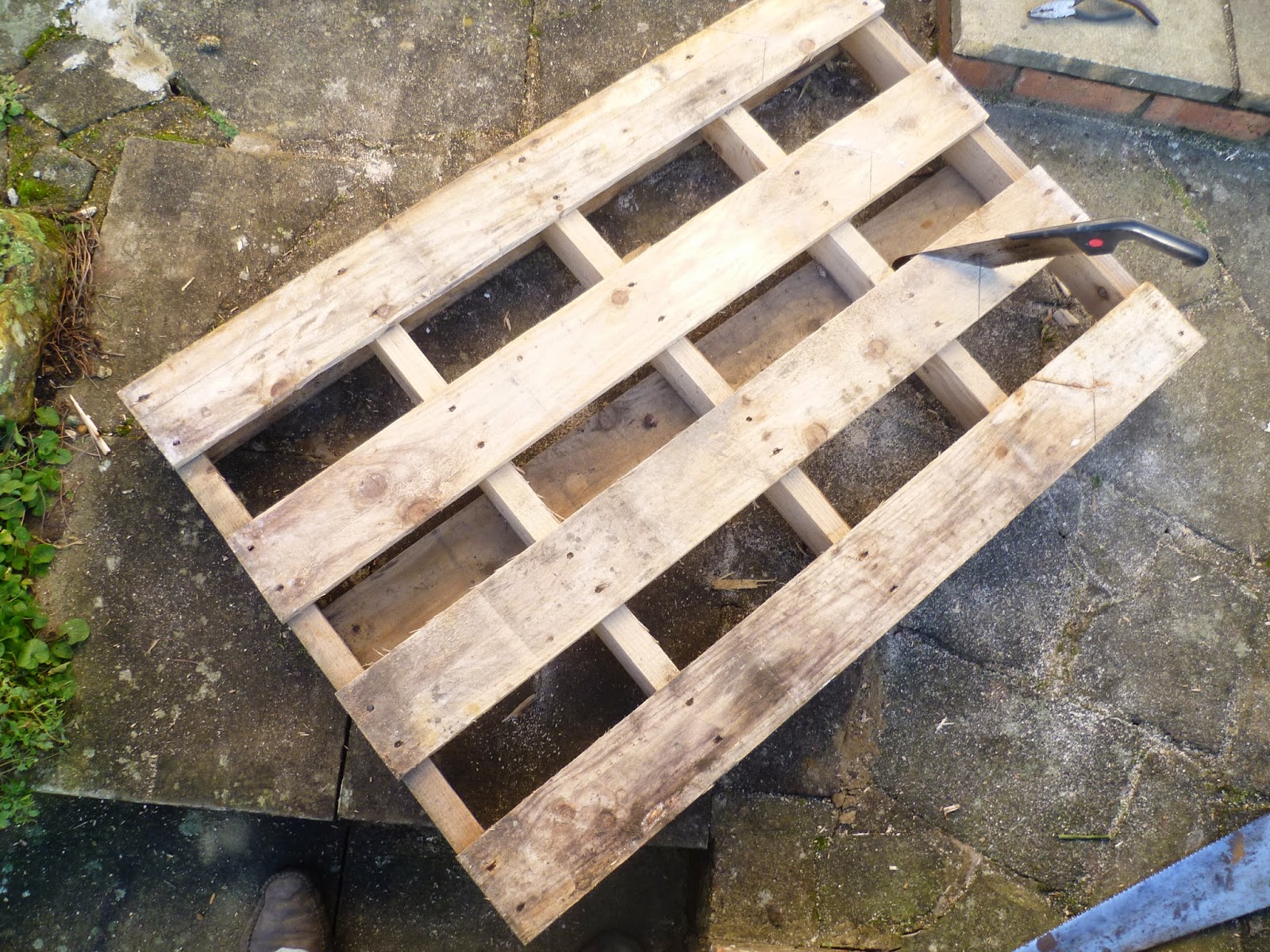 This section of fencing is substantial because it is made of whole pallets but it is attractive. To finish it off I had to fit narrow battens between the wide verticals. Then before putting them into position I painted the wood with a preservative (I want this fencing to see me out)! I also had to fit two extra posts in concrete between the pallets. I will elaborate on how I did that later. 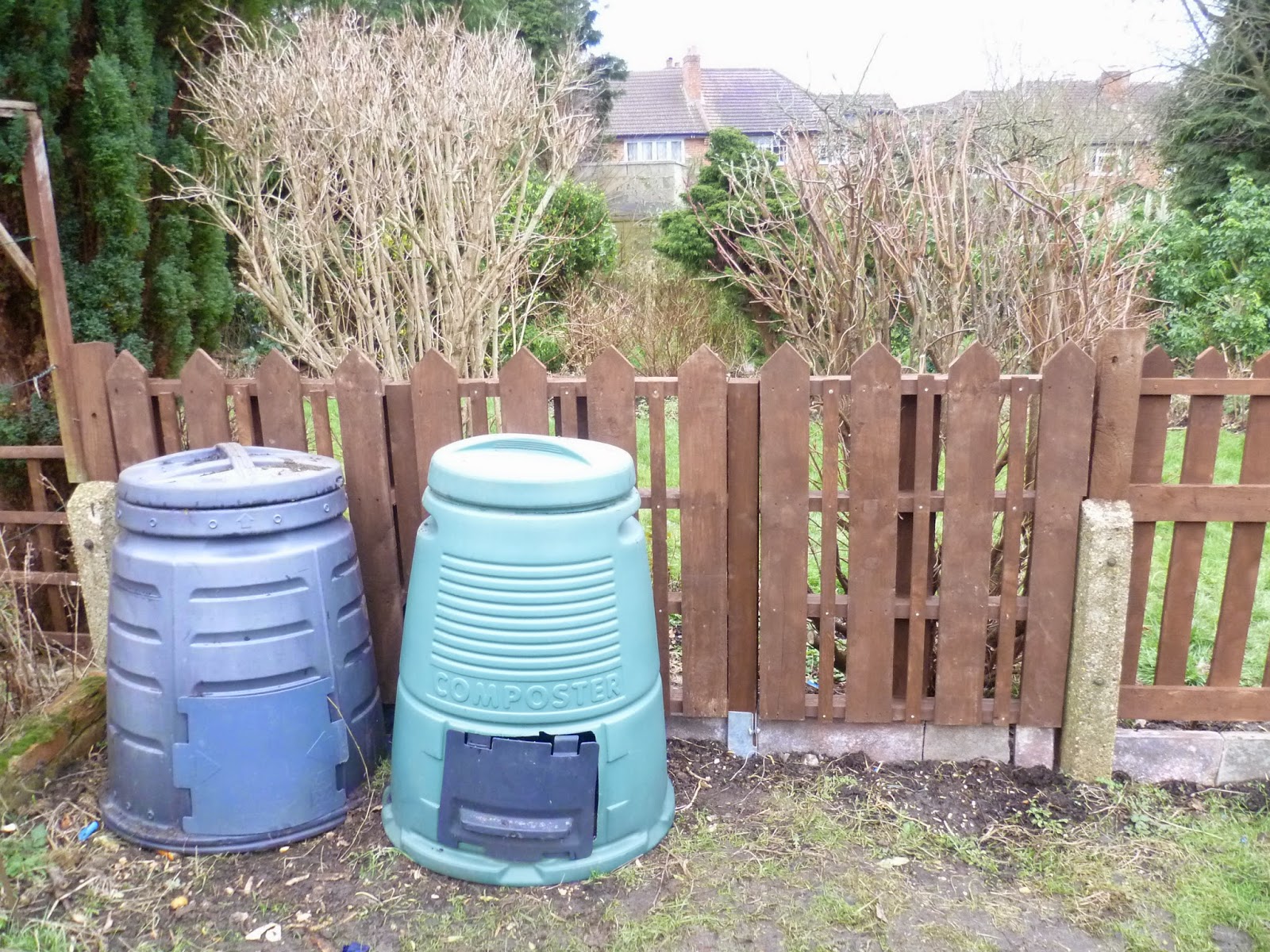 My remaining pallets were less substantial so I decided to dismantle them completely to get the timber for the picket fence verticals.  The way I did this without doing any serious damage to the wood is as follows:- 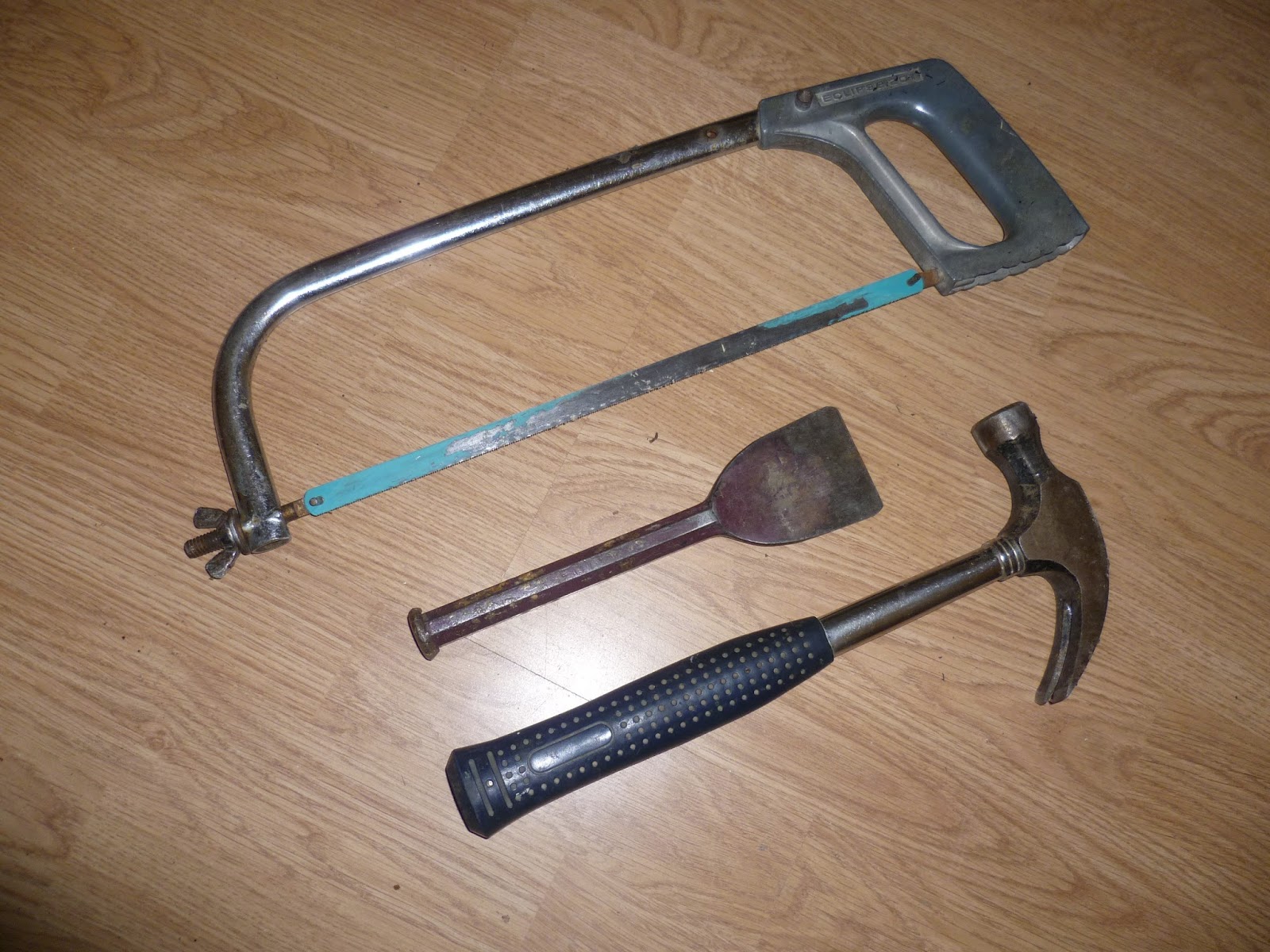 The bolster is in the middle.

I decided to buy arris rails (long horizontal triangular sections of treated timber) to fix the ex-pallet verticals to, as that would be neater than using the heavier sections from the pallets and I also decided to use the metal arris rail brackets.  All the fixing I did with screws as I did not want to damage the wood or loosen the fence supports by hammering.  Cordless drills are so adept at drilling pilot holes and powering in screws that they speed up the process.

The end product looked pretty neat and I followed the UK tradition of having the best side facing my neighbour's property as the picture below shows. 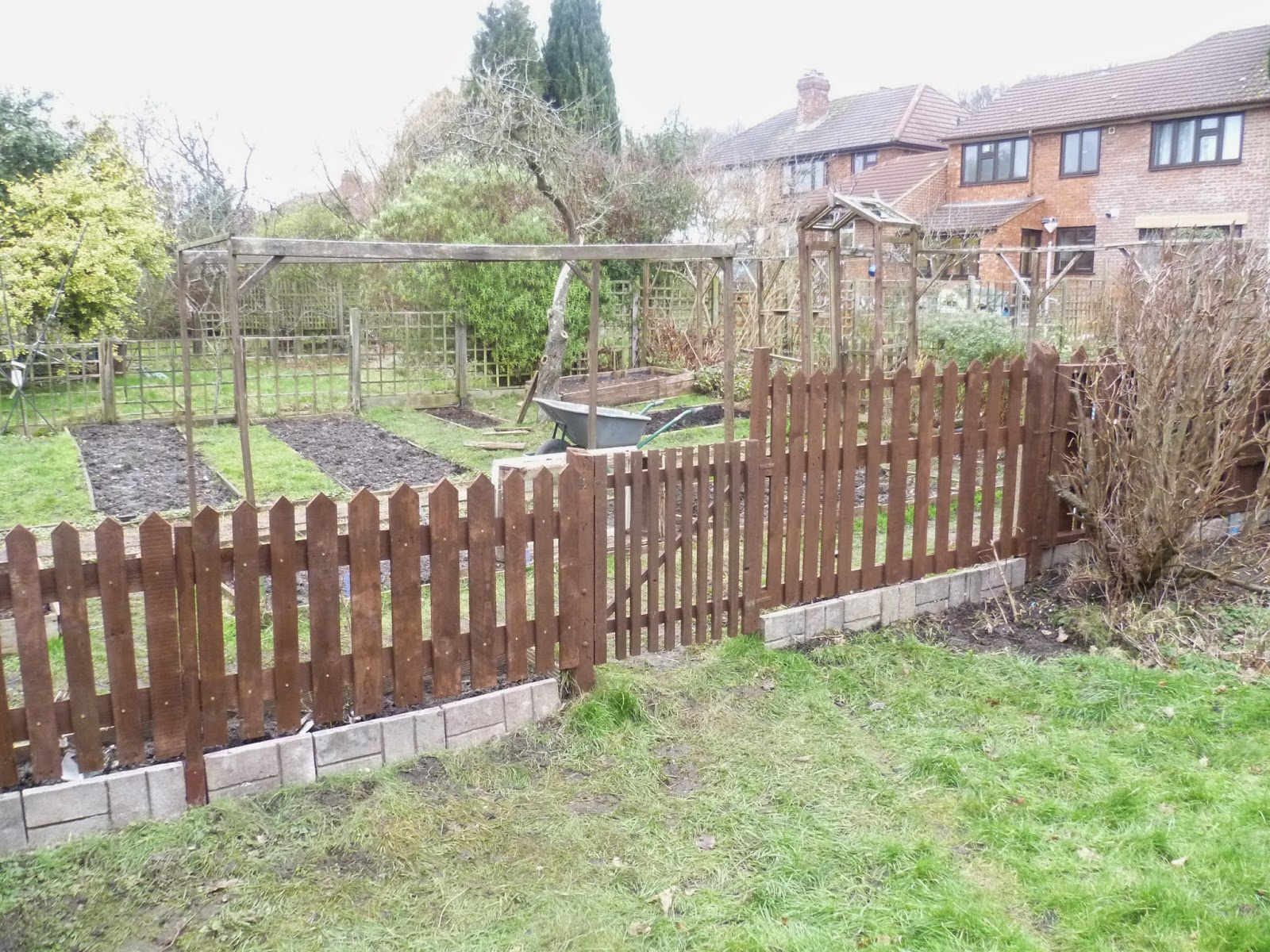 My side looked pretty good too! 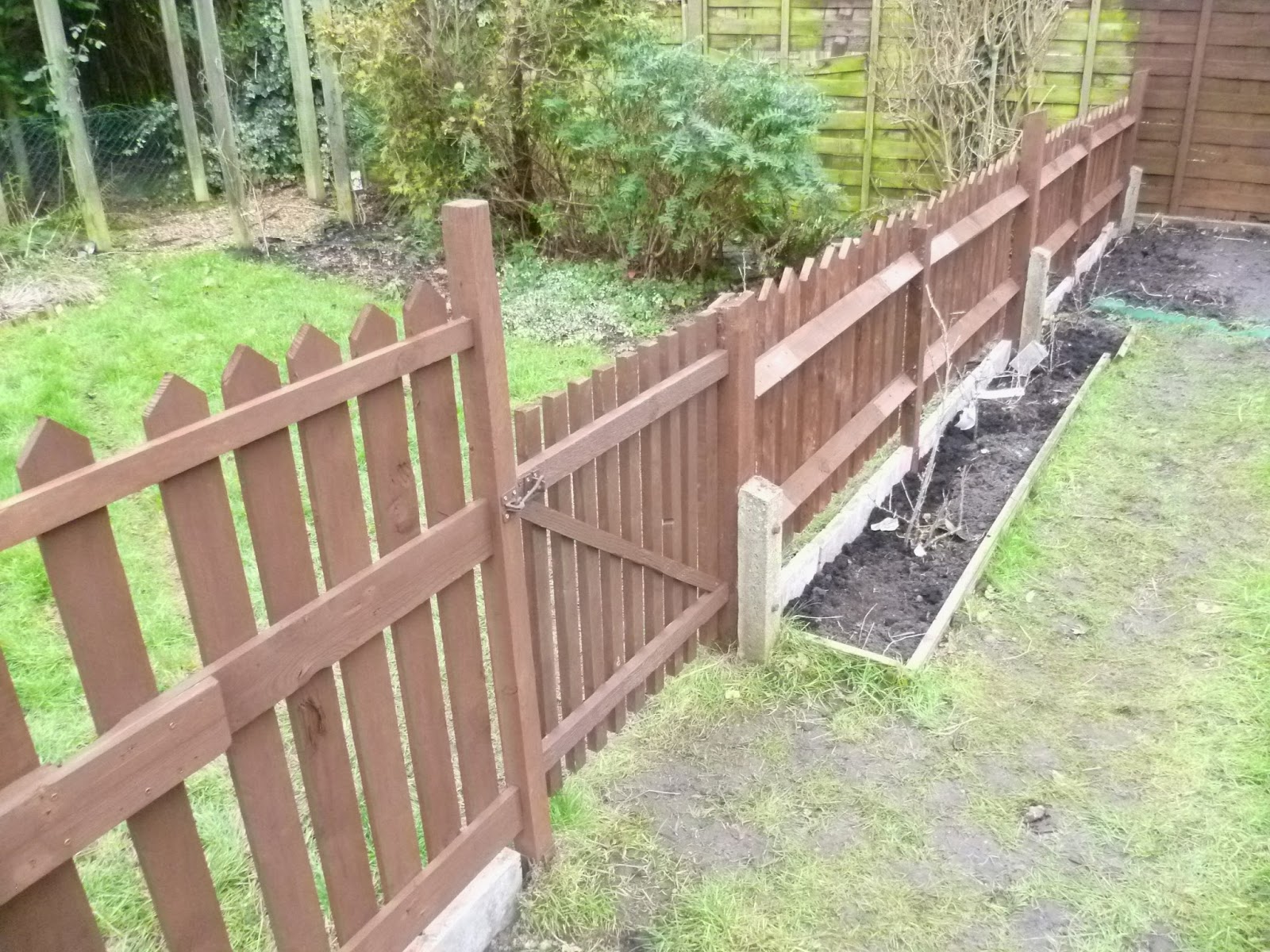 The little gate in the middle is so I can get my lawn mower in her garden to cut her grass.  Dark brown wood preserver finished it off nicely.

So now for the long awaited mention of the new supporting posts.  Where I needed additional supports (because of the length of the span between existing supports) I used those pictured below. 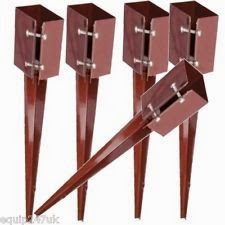 My dodge was to drive them into the ground and carefully line them up, then to dig around them to enable me to give them a concrete collar as part of laying the base slabs.  This made them a lot more stable.

My final dodge was for mixing the concrete mix without making a lot of mess.  I learnt this from Brian my daughter's neighbour when we were replacing her garden fence.  You mix the ballast (small stones and sand) with the cement in a wheel barrow, having first lined the barrow with some heavy duty plastic.  I used part of an old shower curtain.  Then you do the mixing, not with a spade or trowel, but just by lifting first one side of the plastic and then the other side, alternately. This way you mix the contents just like a cement mixer would.  As my ballast was pretty damp I didn't add any water which made it a lot easier to handle the mix and put it where I wanted it.  After a couple of days the end product was rock solid. 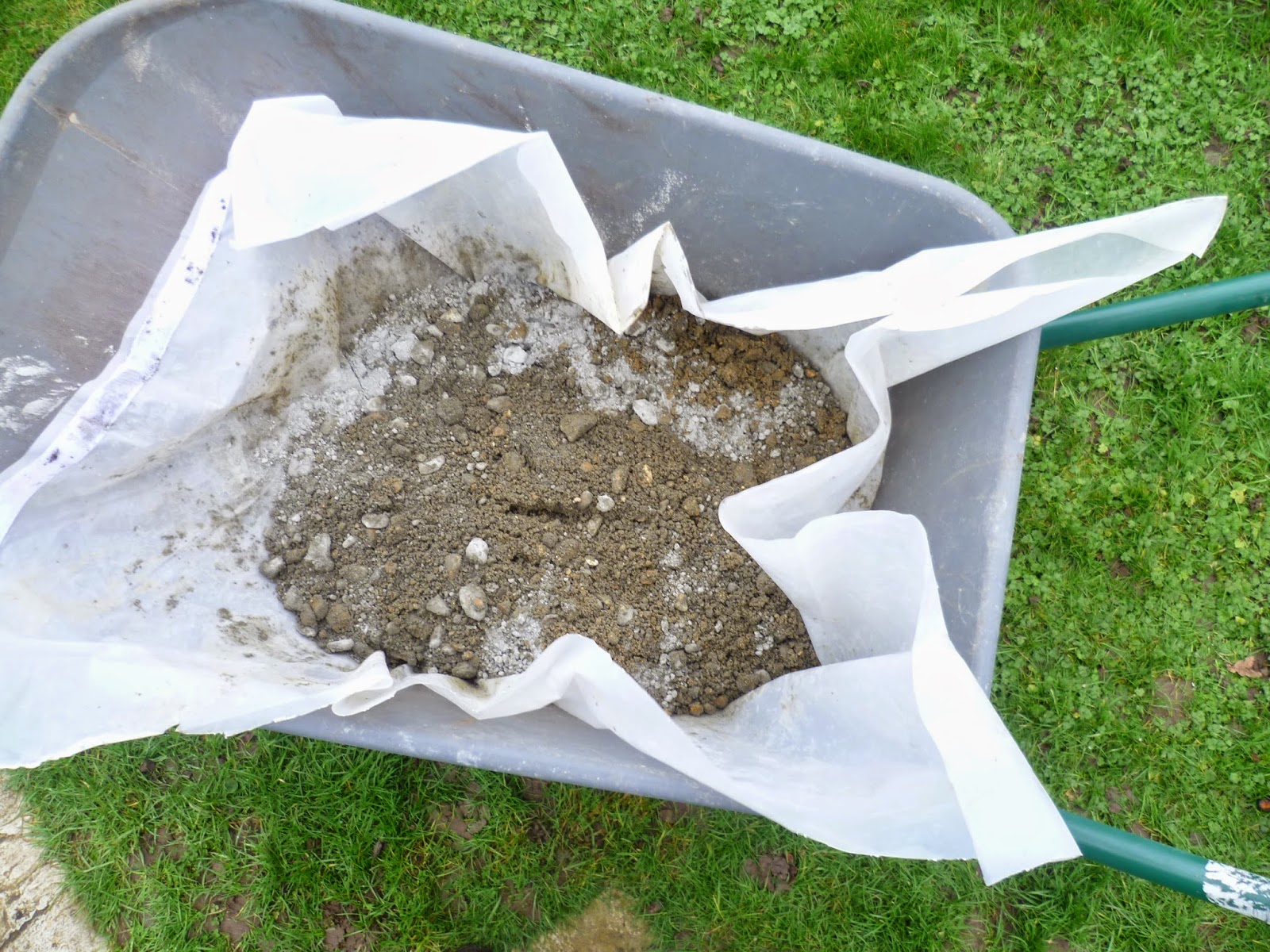 I enjoyed building the fence and keep walking down the garden to view my efforts.  I hope this might prove useful to you.