Sight fly fishing on a small still water in December 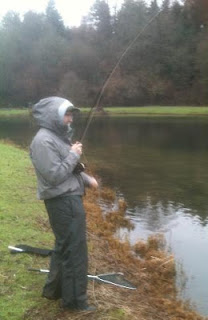 My son in law John connects before I do!﻿

Friday 28th December 2012 found my son in law and I plus my pal Steve and his sons fishing the Albury Estates Western Lake. The water was crystal clear and you could see trout cruising the margins. Air temperature was 11C and the water was 7C. It was overcast, threatening to rain, with a light breeze from the SW. Having got a freezer full of trout from fishing Bewl Water I purchased a brace ticket and decided to try and catch a visually targetted fish cruising the margins using a nymph. The fish were easily spooked and even when I dropped down to a 4lb tippet they still turned away. After a couple of hours of fun trying to hook up and with everyone else landing fish (including my son in law), I decided to go back to using an 8lb leader and a lure and restore my reputation! So I switched to an intermediate line and put a brown minkie on. I cast into the middle of the lake and no sooner had I pulled the fly under than it was hit really hard. The fish was just under 3lb and put up a strong fight before coming to the net. It was in perfect condition with a full tail and beautiful colouring. It was now about noon and the fish characteristically seemed to go off the feed. After about an hour of inactivity I spotted some fishing showing in the middle and moved into position. It took me around six casts to get the distance right putting the lure (a white minkie) into the feeding zone. As I stripped it in smoothly, it was plucked. I kept it moving and it was plucked again, still I kept it moving and a third time it was plucked. I amazed myself by keeping it moving and I got the reward when it was finally hit hard and the fish hooked. A perfect fish of two and a half pounds came reluctantly to the net.  Whilst I prefer fishing wild remote places the fisheries at Albury Estates are well run and the fish of good quality. It is a good place to introduce beginners to as they have a good chance of connecting with a lovely fish.

Now I can add pictures to my Blog there will be no stopping me!
Posted by Unknown at 13:17