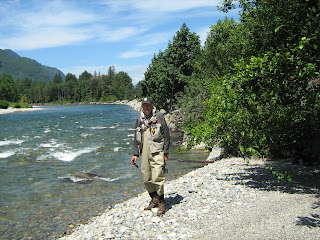 Yours truely on the South Fork of the Sky
﻿

I have been fortunate enough to fly fish in a number of different parts of the UK and the world sometimes with mixed results. I would like to share with you what I consider to be the most critical thing to do to improve the odds of having a successful, memorable experience when fishing unfamiliar waters. This applies particularly if you are only in the area for a short time.  Crucially you need local knowledge!!! And by that I don’t mean a brief chat in the local tackle shop.  What I mean is you need a Guide (or if in Scotland a Gillie). Now Guides can come in two forms, the professional ones you employ and the informal ones you just make friends with. I have had positive experiences with both types.  The professional guides usually have a web site and they advise you what they charge. Often they will provide tackle, transport, waders and boots but the most important thing is their local knowledge. By local knowledge I am referring to the what, where, when and how! Often you need some of that knowledge before you even decide when you want to make your trip.  Let me give you an example. Pink salmon still run up North American rivers in large numbers and they are easy to catch but they only run every other year!  So without local knowledge you could spend a lot of money on a pink salmon trip expecting a bonanza and find you have picked the wrong year! Contact a guide before you book your trip and they will advise you as to what fish species are likely to be present, what the license requirements are and equally important whether there is someone available to guide you.  Also you can then get a feel for what it will cost you and the advantages of having more than just you in your party.  They can also keep you out of prison! For example if you hook a natural steelhead (not a hatchery raised fish) in the State of Washington you are not allowed to take it out of the water, so it has to be unhooked and photographed still partially submerged. Guides are good at that and they know that a hatchery fish will have had its adipose fin clipped off before being released into the river from the hatchery. After having had a guided trip and learnt some of the techniques then there is no reason why you cannot go back to the same location (if you were smart enough to remember it or record it on your sat nav or gps) on your own (or preferably with a pal).


Guides and gillies do not come cheap, however “the labourer is worthy of his hire” and after all you are employing them not just for their time but also for their knowledge learnt over many years. Also, they may have to spend time preparing for the trip, checking tackle, weather and river flow rates all to ensure you have an optimum experience. More than anything they want you to be successful because if you are you might want to come again. 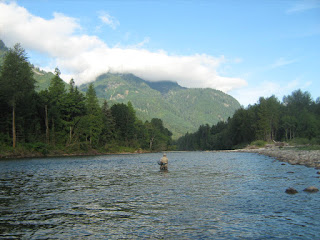 Fishing the South Fork of the Skycomish just downstream of Money Creek Campground (WA, USA)
My good friend Ryan Smith owns The Avid Angler tackle shop and guide service in the Seattle area and I have enjoyed wonderful fishing with Ryan and his colleagues over a number of years. 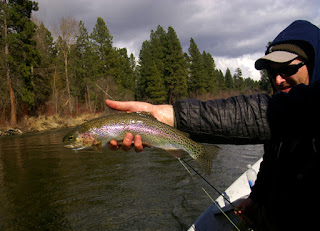 Ryan guiding on the Yakima with a trophy


﻿
However, there is an alternative approach to using a professional guide and that is to get non-professional, but still experienced support.  I have done this successfully on a number of occasions. In its simplest form you just make friends with the fisher further up the bank if they are catching when you are not and find out what he is doing. Most are friendly and helpful and some will even give you the magic fly they are using. When going further a field or abroad I check out the local fishing club website and join their forum. Then I post a message like “Fly fisher out from London, England early June would like advice from local fishers”.


The responses are not normally numerous but you only need one or two and they are usually quality and can lead to great experiences and friendships. Let me share some examples. A few years ago in response to a post on the Washington Fly Fishers site I was contacted by a chap called Lonnie who suggested we meet at the Sultan Bakery at six in the morning for breakfast and he would take me to fish the South Fork of the Skykomish River.  No one in their right mind would turn down an invitation like that. We met up at the bakery and at his recommendation I ordered a breakfast sandwich which was so big that having eaten half of it for breakfast at Lonnie’s suggestion the other half was put in a box by the bakery and taken by me for lunch! Lonnie then drove us up into the mountains to places I would never have found on my own. Having driven off the highway and along a railroad service access track and hidden the pickup amongst the trees we walked into the most amazing wild river scenery. It was staggering. I picked up all sorts of tips from Lonnie like spraying a neckerchief and your hat with insect repellent rather than your face and how to read the water and spot the seams where the fast and slack water meet and the fish hang out. I didn’t do as well as he did but I have been back on my own several times over the years and caught some lovely fish. Every time I return to the area I let Lonnie know and we have a session or two together sometimes he even takes me out in his drift boat. In some States it is illegal for a non certified person to take payment as a guide, but I suggest you buy lunch or the fuel which you might do for any friend. 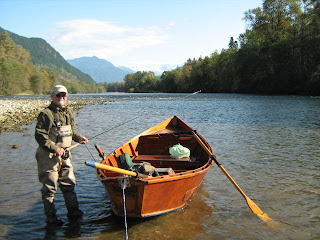 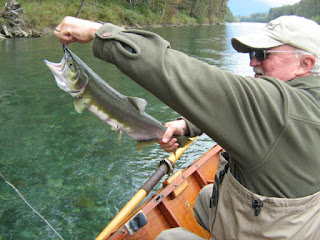 Lonnie skillfully tails one of my pink salmon just before I broke an 8wt rod on another!
More recently out in Washington State I treated myself to a new float tube to fish the lakes from. So I posted a message saying I was fishing Rattlesnake Lake the next day (don’t panic there aren’t any rattlesnakes, the early settlers heard wild flower seed heads making a rattle sound and thought it was snakes)!  I received a few on line suggestions as to suitable flies to use, but the next day a chap called Scott turned up on the water in his pontoon boat and called out to me saying he was going to give me a master class in how to fish Rattlesnake! He was kind enough to give me some lovely large green and black leach patterns. He suggested I fished sub surface using my DI 3 (sinking line) and we had a ball both catching fish up to 14 inches.

A minkie booby
Fishing from a float tube is great fun because you cast out and then gently paddle along trailing the line waiting for a hit. If you hook a biggish fish it will tow you along till it gets tired.  After a couple of hours of good sport the fish seemed to go off the boil. So using my maxim of “if you aren’t catching change something” I slipped on a minkie booby fly letting the sinking line drag it down. Almost immediately I was back into the fish. Scott drifted over to see what I was doing and I gave him the fly as he had not seen a minkie booby before (neither had the trout I think) and I felt I owed him for giving me such a good day. 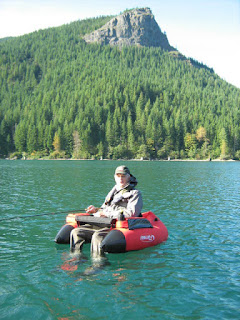 Me in my FishCat float tube on Rattlesnake Lake WA, USA 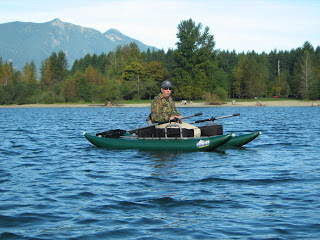 I am a great believer in the idea that giving is better than receiving so I think if one takes advantage of someone else’s generosity one should be prepared to reciprocate. So I am more than happy to try and help a visitor to my area get into some good fishing.


Well I hope I have convinced you that whether it is using a professional guide or an experienced new friend, to get the most out of fishing in new waters you are more likely to have success if you have some help.