It was mid-morning before I decided I had to wet a line, so I quickly loaded the car by working down my “what to take list” (see previous blog dated 30th Jan 13).  I still have not found my Polaroid glasses, maybe I need to buy some new ones as I consider them essential.  The traffic was good so I cruised into the Weston Fishery, Albury, Surrey, UK in good spirits.  Immediately I noticed the Lower Mill House Lake had been drained so the banks could be limed.  I parked the car and decided to take some pictures of the drained lake as most of its features were revealed. I find these pictures are not very attractive but they are very useful because they show you what is going on underwater particularly in term of depths. 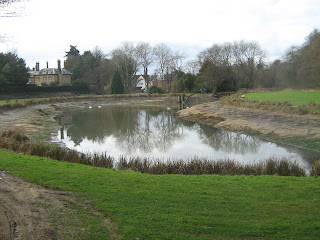 Included in the next picture is the monk. This is the overflow structure where the water level in the lake can be set by placing planks into a couple of vertical slots in the sides of the structure. The big blue pumping set visible in the background is there temporarily to drop the water level lower than can be achieved by removing all the planks in the monk. 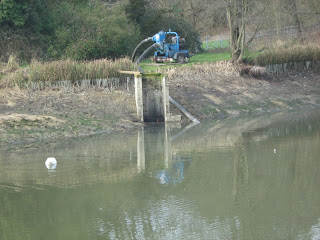 I then had a look at the main lake and saw someone playing a fish.  However, I decided to jump back in the car, drive a mile down the road through the village of Albury to the Vale End Fishery as I had not visited there for several months.  This venue was busier.  I asked a chap who was leaving how it was fishing and he said it fished well first thing but now it had gone quiet.  Looking around I noticed a chap trying very hard to cast but not quite making it happen.  I decided to see if I could help and it turned out it was his first attempt at fly fishing. He let me give him a few pointers and a small cat’s whisker fly. When I got him to tuck the rod handle down his sleeve to stop him flexing his wrist too much it all came together and he was casting much better.
I had a few casts with an intermediate and then a sink tip line on the large Belmont Lake but as the water clarity was not good and the water temperature was 6°C I moved to the Mill Pool.  This has the Tillingbourne stream running through it. One chap at the far end of the pool hooked a good fish but then lost it. I could sense his disappointment from 100 yards away!
So on the principle that “if you are not catching, change something” I moved back to the Western Fishery where I met a nice chap in the car park who had only been fishing for 4 months but who had caught a brace.  He was so enthusiastic that I gave him my card and said if he ever wants to have a go at fishing Bewl Water loch style I would be pleased to share a boat with him.  Then I worked my way up the west bank of the main lake trying everything I could think of.  I even resorted to a di 3 sinking line with a booby fly, all to no avail!  By this time I was beginning to doubt my own ability so I went and had a look at the Wood Lodge Pool.  The water was crystal clear and as smooth as silk (there was no wind) and I saw the water surface displaced by fish moving.  So standing well back from the water’s edge, I changed to an intermediate line (I thought that would be less likely to spook fish than a floater) downsized to a 4lb tippet, and put on that old faithful fly a PTN (Pheasant Tail Nymph).  I did a few exploratory casts to sort out distance and to make sure the fly and leader immediately went sub surface.  Then I waited till I saw a fish displace some water (humping) and I cast where I thought he was going.  The fish was straight onto the fly, took me back onto the reel and then after some careful playing (4 lb tippet) came to the net.  It was a lovely full-finned rainbow. 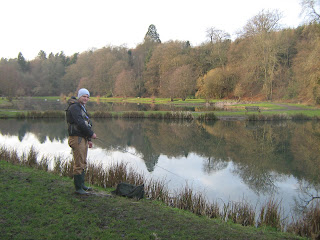 A nice chap (pictured above) from Slovenia came round and asked me what fly I was using.  Then we both fished on and I spotted a slight bow wave moving along the bank opposite me.  I managed to put the nymph a few feet in front of where I thought the fish was and the line tightened and I was in again.  More careful playing took place with me trying to steer the fish away from the centre of the pool so it did not spook the other occupants and mess things up for my new friend.  Then the net, the photograph and it is time to say goodbye.  I believe in quitting whilst you’re winning! 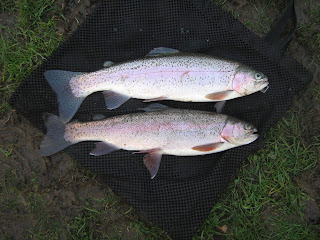