Rainbow trout that leave the river for the sea come back to their birth river big, strong and so agressive they are called "steelheads"! The steelhead is one of the most exciting fish to catch and I have had that previledge on the Skagit, WA, USA.  When I want to relive that experience I watch one of my favourite videos at

http://www.youtube.com/watch?v=Ne2RlzIsgTI
it is called Steelhead Dreams Part 1 - by Todd Moen

It is brilliantly filmed and a joy to watch even for non fishers. I recommend it to you. Although it is filmed in BC the river shown is very similar to the ones I fish in WA.  Part 2 is good to but watch Part 1 first. 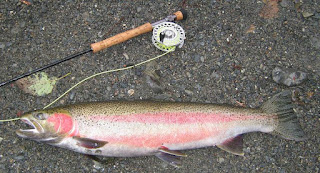 You can keep hatchery steelheads like this, identified by a clipped adipose fin (just in front of the top of the tail). Wild fish have to be released whilst still in the water or you go to prison!  This one was caught just downstream of the Wallace Hatchery by Chris one of my fishing pals. I hooked one too but I had foul hooked it so it didn't count!