PART 2 Fishing Rods: And how to avoid breaking them!

So here it is by popular demand!


Fishing Rods: And how to avoid breaking them! PART 2


See Part 1 on the Blog for the first 5 threats to rod safety and suggestions as to how to overcome them if you haven’t already done so. 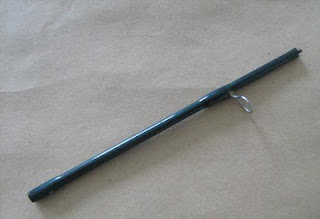 Threat No 6:  Damaging the rod blank with a fly strike!  If on the forward cast a fly, particularly a heavy fly like a gold head, lead head etc. hits the rod near the tip it can either break it outright or damage it such that when it comes under strain it fractures and breaks at the point of impact.


Solution:  You could solve the problem at source by not using heavy flies and instead using sinking or sink tip line to get the fly into the catching zone.  If you are going to use a heavy fly then opening your casting loop can help, as can directing the fly further away from the top of the rod on the back cast.  Heavy flies are a danger to you and anyone near you.  Years ago I heard Charles Jardine tell how he saw a boat angler bury a gold head nymph into the back of the ear of his boat companion.  After it was dug out (I think at hospital) they carried on fishing. I few casts later the same thing happened again!   Having had the second one removed they carried on.  It was only when the third hit occurred that the victim decided to call it a day!  Hats and eye protection and nice high back casts are what I like to see.  Ideally the less experience caster should be casting over the water and not over the boat.


Threat No 6:  Falling on your rod is always a risk whether you are getting in or out of a boat, climbing down a bank or getting over a stile.


Solution:  I never get in a boat actually holding a rod. If I am on my own I put it in first.  If I am with a mate we pass the rods to whoever is in the boat first.  When climbing down a steep bank I see if I can pass the rod down first or leave it behind whilst I climb and then reach back for it.  At stiles I usually pass the rod over the fence and lean it against the fence.  If I get caught out on a slippery patch and sense I am going to fall I would rather gently toss the rod onto long grass or a bush than risk falling on it.


Threat No 7:  Dropping something heavy on the rod!  I included this because I will always remember seeing angling TV’s John Wilson catch a hard-won pike from a boat. In order to pick the big pike up so he could pose for the camera, he laid his rod across the boat gunwales. He held the pike up and smiled for the camera. The pike was camera shy and flipped right out of John’s grasp only to fall on the rod and snap it in half!


Solution:  Be careful who you pose with.


Threat No 8:  Not matching the line weight to the rod.  An ATFM (Association of Fishing Tackle Manufacturers) 7 weight rod will cast a 7 weight line perfectly.  It will also probably cast an 8 weight line reasonably well but put a 9 or 10 weight line on it and you are likely to overload it and break it when trying to cast.


Solution:  Match rod and line weights.  Years ago before I understood that, I acquired a second hand  Normark rod complete with line and reel and just could not make it cast properly.  So having given up with it I did the next best thing and gave it to my friend, Steve.  The next time we were fishing together I noticed that not only was Steve fishing with it but he was casting brilliantly. When I asked him what the secret was he told me that he had taken it down the tackle shop and the shop assistant had tried a couple of lines on it and supplied him with the appropriate one.


Threat No 9: Overloading the rod tip when playing a fish.  This is when you have a fish on and you are trying to bring him (or her) to the net. In order to do so you have the rod nearly vertical, so the rod as a whole stops being a shock absorber and a lever and all the weight and energy of the fish is stressing the fine tip of the rod.  This can snap the tip.


Solution:  Long-handled landing nets help as they keep the fish at a distance.  Bringing the fish to the net when you have got it on its side on top of the water helps.  Holding the rod high by the side of your shoulder rather than in front of you also helps.


Threat No 10:  Moving long rods by road from one beat to another.   If you have assembled a two handed rod and taped all the joints you will be reluctant to dismantle it.  Trying to relocate by tying rods to roof racks is risky and more risky still is trying to hang onto them outside of vehicle windows.


Solution: Although quite expensive, properly-designed bonnet and roof rod holders with suction clamps are the way forward.  Hopefully your ghillie or guide will have some.

FINAL TIP (literally): Most rod tip rings (tip guides, in the USA) are put on with a glue (Tip Top Adhesive) that melts when heated. So if you have a worn tip ring you can heat it with a match or lighter and pull it off. Then coat the tip of the rod with more heated adhesive and apply a new tip ring.
Well, I hope that has been of interest and you will either consciously or sub-consciously be protecting your rods more  If you have any ideas, suggestions or fishing war stories please feel free to share.