With the start to the trout fishing season just about to kick off big time, I thought it appropriate to mention some helpful “dos and don’ts” relating to fly fishing and hooks.  The most important DO is to always wear eye protection.   Instructors will not teach pupils unless they have glasses, sunglasses or safety glasses on. 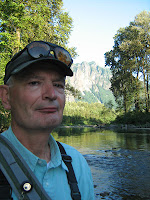 On means covering the eyes, not perched on the top of your head!


As far as I can recall I personally have only ended up on the point of a hook on two occasions!  Both were memorable and graphically illustrate some don’t.


I am going to mention the least traumatic one first.  If you can cope with that without passing out then you might want to read on.  My pal George Kolar and I were fly fishing, wading the salt (fishing in the sea) at the entrance to Pagham Harbour (a nature reserve on the south coast of the UK).  We were after sea bass.  It was fairly windy and the tide was coming in fast.  I had caught a couple and thinking I had seen the flash of a big fish, I tried to change cast direction in mid-air.  The wind caught the fly and buried it in my ear lobe.  I cut the leader, tied another fly on and fished on.  When I saw George walking out of the water I followed him and giving him my Leatherman asked him to please remove the fly from my ear.  He took one look at my ear complete with dried blood running down my neck and said, “Alan, I don’t do blood.”  So we carried on fishing and I pulled it out later using  the car wing mirror as an aide.  If you can cope with that read on.

The other time I hooked myself was years ago when I was learning to Spey cast on the River Tay with Michael Evans the renowned salmon-casting instructor. So we are talking 15 foot two handed salmon rods and large, heavy flies.   Whether you are single or double Spey casting depends on which bank you are on. I had been casting using the appropriate cast on one bank during the morning with no problems.   After lunch we swopped banks and I got confused as to which cast I should be using.   Now on the forward cast I am told the fly can be travelling at over 200 miles per hour.  So when I did a powerful wrong cast and the fly hit me in the face I thought I had been shot!!!   Immediately, the current grabbed the line and started pulling it downstream.   Fortunately, I had the presence of mind to catch the leader and bite through it so I didn’t get dragged downstream by my face!   Staggering out of the pool I was intercepted by John, the ghillie.  He suggested that I sat on a log whilst he assessed the situation? 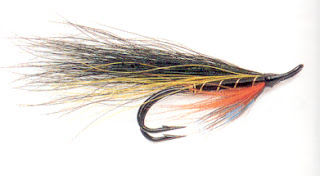 The fly was aptly named a “Munroe Killer” and it was a double, that is, it was two barbed hooks joined together.  John said it was buried in my face up to where the hooks joined.  When I said it sounded like a hospital job, he replied “You don’t want to be wasting your day hanging round a hospital.”  So I asked what the alternative was and John said he could get it out using a special trick that would not leave a scar.  I asked how he did it and he said it involved using a bit of line.  I didn’t understand but I resolved to trust him.  All he did was to tie some strong line to the shank where the two hooks joined together, put his hand on the side of my head and jerk the line really hard.  I said (rather loudly) Wow! Is it out?  He replied no, but it’s half out!  Then followed another tug and I was no longer “hooked”.  Surprisingly this had not hurt me much because the fly had hit me so hard the area around it was numb.  John was right, I was left with no scars, the hooks came out the way they had gone in, and the torn holes healed perfectly.  In spite of being somewhat shaken by the whole experience I tied another fly on and staggered back into the water casting very carefully. When Michael Evans turned up to see how we were getting on I expected to be chastised, however, all I got was a “Hear you have been in the wars Carter”!  Michael then got John to tell me how he (John) had cast a treble hook up his own nostril!!!   I said that must have been a hospital job?  John said no the water was freezing cold so he buried his face in it till his nose was numb and jerked it out.  Michael said that there was rather a lot of blood involved!

All’s well that ends well, so on that trip I did end up catching a rather nice fresh run 7 lb Atlantic Salmon.
Posted by Unknown at 08:26