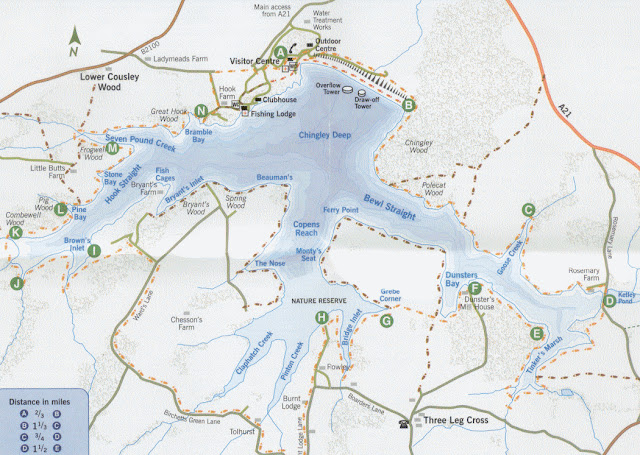 Let me start by saying I got it wrong at first.  Having got my ticket I tossed up as to whether I should fish Bramble Point or drive to Wards Lane and fish Bryants inlet, and the latter won. When I got there I found it busy with chaps who looked as though they had camped there.  So I took the challenging walk to Beauman's, stopping to fish"Green bank", because the water was so high the foot path was under water and I had to blaze my way through jungle!  When I got there I had it all to myself until I had a visit by boat from Rob Dixon the fish farm manager in his role as Water Bailiff.  He was diligently doing his rounds checking permits. 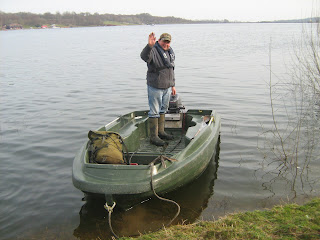 I always like to see members of the the Fishery team because they are a useful source of knowledge.  He said people at Bramble point had already bagged up (meaning they had caught 8 fish and it was only 0900).  He suggested that I was in a good spot to catch a bigger over-wintered fish so I pressed on.  Eventually I was rewarded with a beautiful "blue" trout. 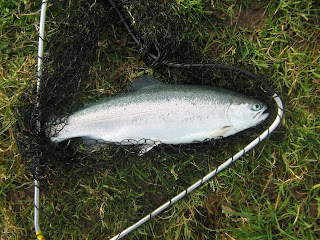 As I wasn't hitting lots of fish I did what you should always do, i.e. change something, so I moved on walking round Beaumans to "The Nose".  Enroute I thought I was in South America when I saw a Llama! 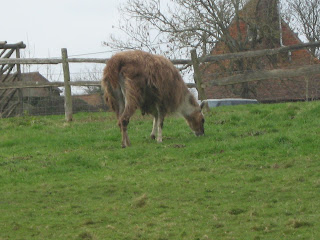 I had a few casts on the way but the wind was very cold and in my face and there were no signs of fish. Surprise, surprise when I got to "The Nose" I found the chaps I had seen previously at Bryants. They had caught a few fish there and caught a few more at The Nose.  However, they said it had gone a bit quiet and as they moved on so did I.

I decided to cut my losses and drive back to the Fishing Lodge for advice.  If I had used my brain I would have called them from my mobile.  The fishery staff want you to be successful (then you'll come back) so they are always very helpful.  Anyway, I saw Vince Brook (who fished for England) and Rob Dixon and they said Rosemarys Lane was fishing well. So, have rod, will travel. I parked by the small dam and as I was walking in I met a fisher walking out with his 8 fish.  He said it was fishing well, so all excited I found a spot on the bank between a couple of fishers, having asked if that was OK with them, I started to get serious.  As you can see from the picture below it was busier than usual but nothing like what our American friends call "combat fishing". This is when you are standing shoulder to shoulder. 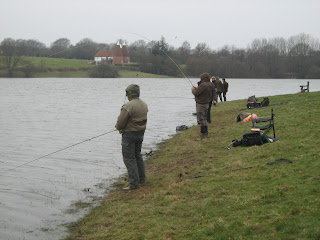 I caught some nice fish, using an intermediate line with a slow retrieve. 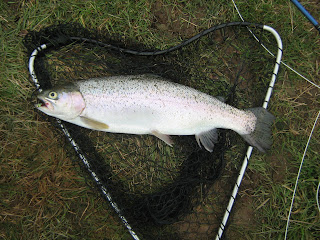 Black and green lures and white minkies all worked. The fish responded savagely when hooked. 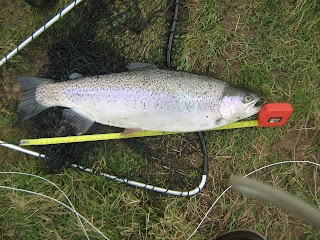 I made friends with Andrew who was fishing next to me and was catching consistently. So much so that I took some pictures of him. 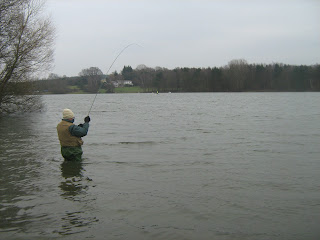 I started to bag up, ending the day with 4 fish, the blue was in the car. 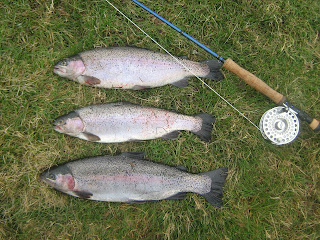 Andrew was really in the groove. 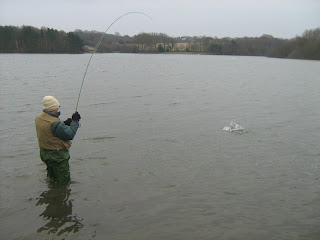 So with his permission I videod him. Short but sweet and hear the wind!