Some tips on boat fly fishing for trout at Bewl Water, Kent, UK, and success with a magic Booby!

Let me start off by saying the best thing you can do is to join the Bewl Bridge Fly Fishers Club (see link at side of page) where you will get loads of help especially via their bi-monthly magazine the “Bewl Angle”.  As you will see if you stagger to the end of this post it was through reading the magazine that my trip yesterday went from failure to success.


On the practical front here are some suggestions you may already be aware of or you might like to try.  Firstly the whole object of having a boat is to have the ability to be mobile (like the fish) and to be able to cover the whole water (except the bird sanctuary where the really big fish hang out)?  If you’re not seeing fish, and catching, then move.


So you have hired a boat and been given a boat number, before you set off, check it out.  The staff are very good but they often get to clean and check the boats just as it is getting dark. 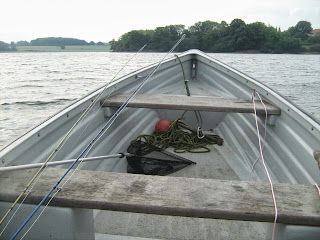 Look for an anchor (it is attached to a red buoy so that if you get it caught on the bottom you can untie the anchor rope and leave the buoy marking the spot where the anchor and rope are.  The rangers can then try to recover it.  Oars are a useful plan B, although most of us have the fishing lodge number in our phone which is a better plan B.  Many years ago as dusk was falling at Rosemary’s Lane I foolishly let a beginner operate the engine to take us back to the lodge.  John tried the other way of stopping and sheered the pin that holds the prop on, then he announced that he couldn’t row.  Exhausted, I slept well that night!


Note the small G clamp I have attached to the edge of the front seat, with the drogue rope attached to it (more about drogues shortly).   Note the landing net with the long handle, I got that idea from the competition boys.  If I am on my own in a boat I usually set up two rods (you are only allowed to fish one at a time).  I will set them up with different lines (say a floater and an intermediate) so I can quickly change my method if required. 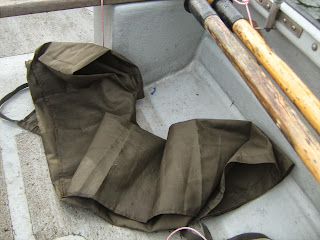 The drogue is an underwater parachute enabling the boat to drift down wind slowly.  It is called loch style fishing and it means that you are covering fresh water all the time and hopefully another pod of fish.  If you don’t have a drogue then you have to anchor, tie up to a buoy (if it’s allowed) or drift free (a problem in strong winds). 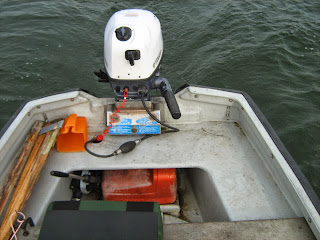 The orange bailer is essential for fellers fishing as it enables you to discretely urinate whereas the ladies have to grit their teeth or motor back to the lodge.   The red cord is the “kill cord”, solo anglers are encouraged to attach the end of it to themselves so that in the event of them falling overboard the engine is killed and they a) don’t get chewed up by the prop and b) have a chance of swimming to the boat and hanging on.  I don't have a fancy armchair type boat seat.  What I do have is a foam one that velcros to the wood seat.  An occasional boat fisher could use an old cushion from home in a strong plastic bag.


The bilge pump (black handle on the left) is useful especially after a heavy downpour. You can also see the second G clamp for the drogue in the left hand corner.


So yesterday, having had a chat with Janet in the lodge, paid my dues and been assigned my boat I had a helpful chat with James, one of the fishery rangers.  He suggested I drift from Beaumans to the cages and used very small flies.  He said the fish were on the top swimming around in small shoals and that I should watch for any disturbance of the ripples and cast to them.  I thought that given the time of year the fish would be on hoppers and daddies so I spent the first few hours fishing them to no avail.  Eventually I gave up on what James had suggested as it got quite wet and windy.  I motored over to the corner of Chingley Wood to get out of the wind.  Within a few casts I had my first pluck on the daddy or hopper but did not hook up.  I tried a number of different drifts and even the corner of the damn, where I saw the odd fish.  Eventually as the weather improved I decided to try round the fish cages.  Whilst drifting between the cages and the grass at Ward’s Lane, right in front of me half a dozen fry leapt out of the water followed by a big rainbow and I realised the fish were on the fry!.


It was then that I remembered that Ray French had written in the latest edition of the Bewl Angle that competition anglers were having good success using tiny booby flies.  I also remembered I had tied 2 the night before.  So out they came and on they went and I came away with three nice 2lb rainbows.    Thanks Ray! 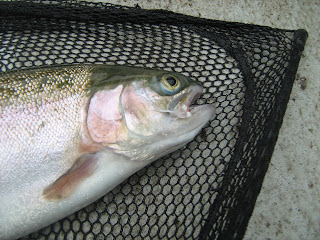 If you look closely you can see the tiny Booby in the corner of the fish's mouth. Now I am going to try and tie some more.