Thursday 12th June saw me meeting Rowland Elvidge at Yate where, following a splendid meal provided by his daughter we headed for our rendezvous with Ian Govier at the Aldi car park just off the M4 at 9pm.  On meeting, Ian explained that the rivers were running a bit high that night so sea trout (sewin) fishing was postponed until Friday night. So we headed to the caravan for an early night. About an hour later having followed Ian through winding country lanes in the dark we arrived at Brandy Brook and after 10 minutes hooking up gas and water we were all set.  The clear skies meant it was fairly cold so I wore my buff on my head to great effect and slept well.
The next morning having had an excellent breakfast we met Andy Jones the fourth member of the party at Llys-y-fran reservoir. Launching the boats set about some serious loch style trout fishing under a bright sun and cloudless sky! Andy and Rowland’s boat was number 13 so they knew they were in for a bit of a challenge! 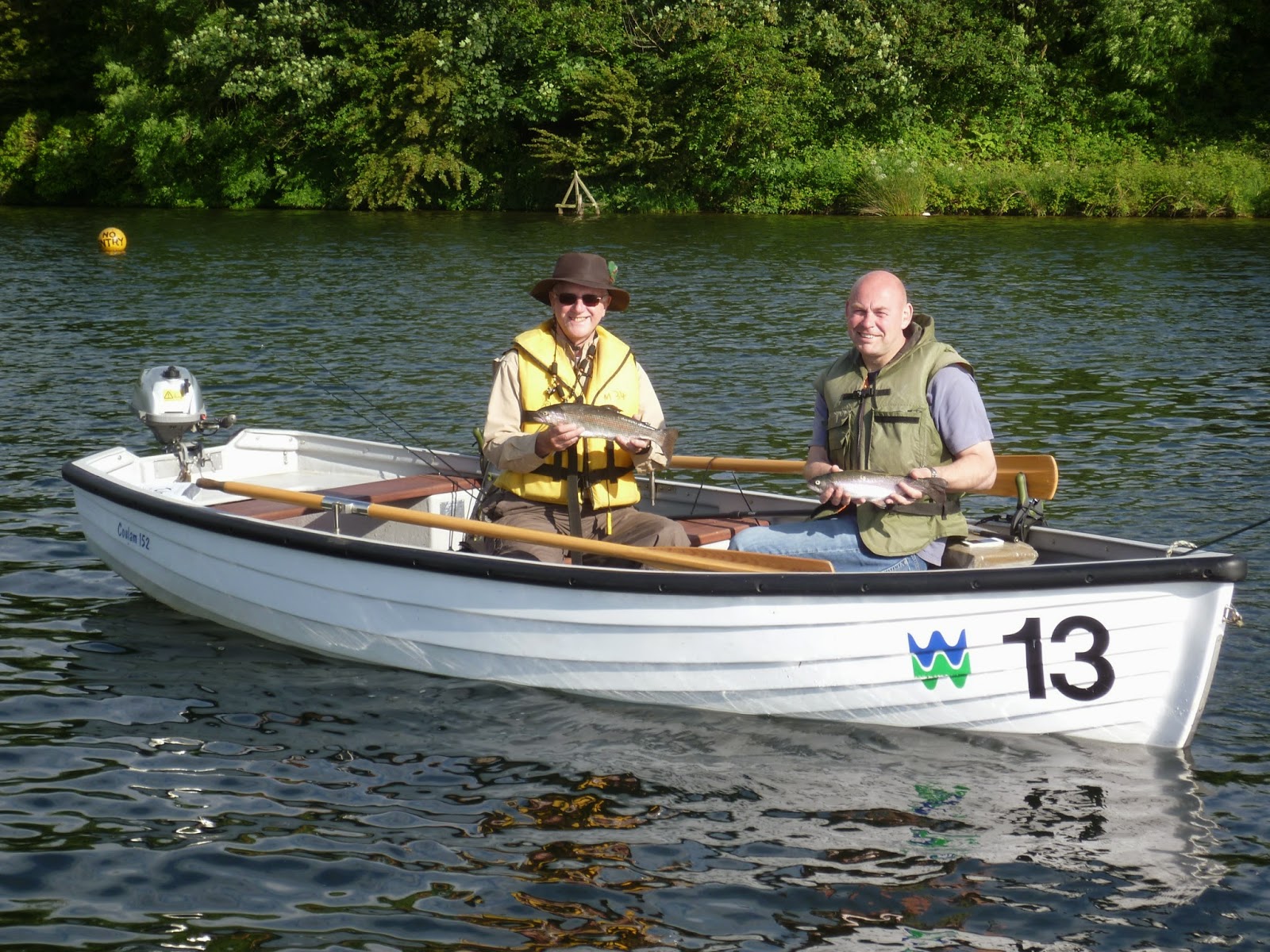 Drifting on the drogue, mentally miles away, I had such a savage pull on the line that I thought Ian, my boat companion who was casting at the time, had picked up my line.  It took a few micro seconds before I realised that I had a large fish on and it wanted to go places!  Sadly the hook had not set properly and seconds later he abandoned me.  From then on we only found fish near the shore and mainly spent the rest of the time drifting in with the breeze and then motoring back out.  I think we had five fish in total but the fishing was challenging and enjoyable and the weather too good. 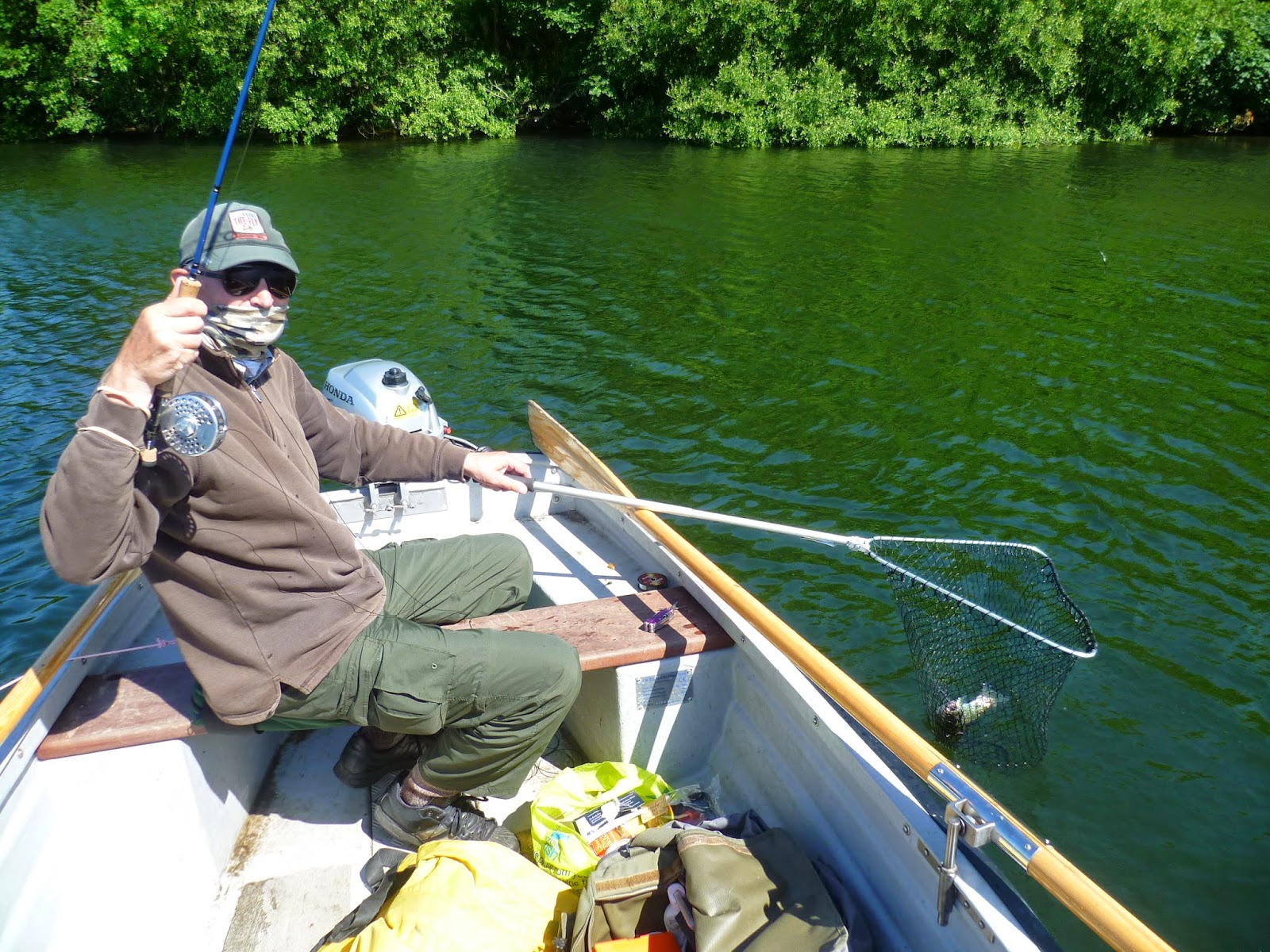 Me wearing my buff to keep the sun off my face and not wearing the PFD as I was in the process of stripping off my jacket to cool down when a fish took the fly!
Finishing around 6pm we headed (via a fish and chip supper) for the Abercothi Estate where Andy had booked us some sewin fishing on the River Towy.  The Towy (Tywi in Welsh) is generally regarded as the best sewin river in Wales.  Andy then gave Rowland and me a master class on how to read and fish a sewin river as we walked the beats.  We were told we could fish the famous Junction Pool beat where the Towy is joined by the Cothi and a beat on the Cothi as well. 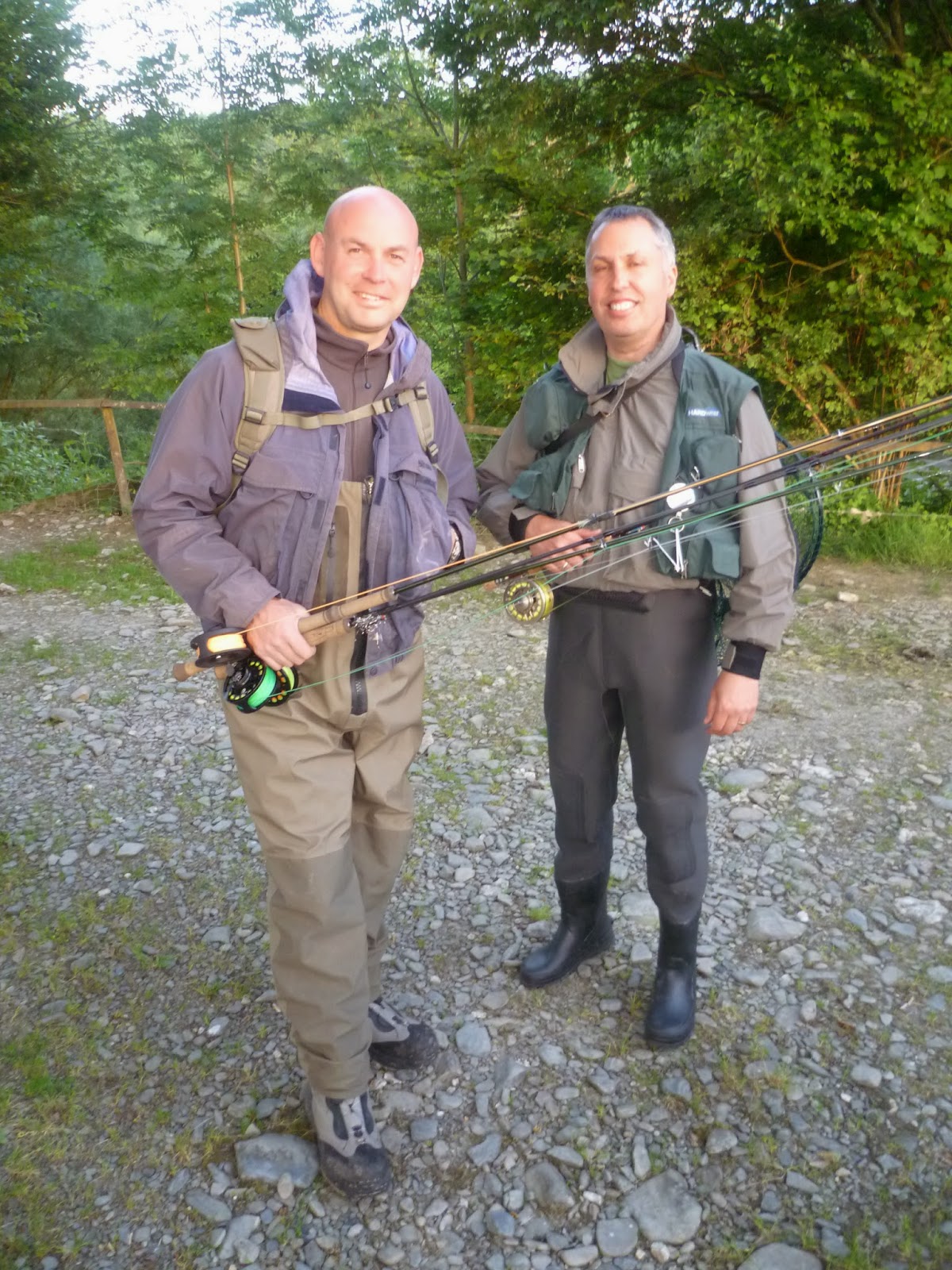 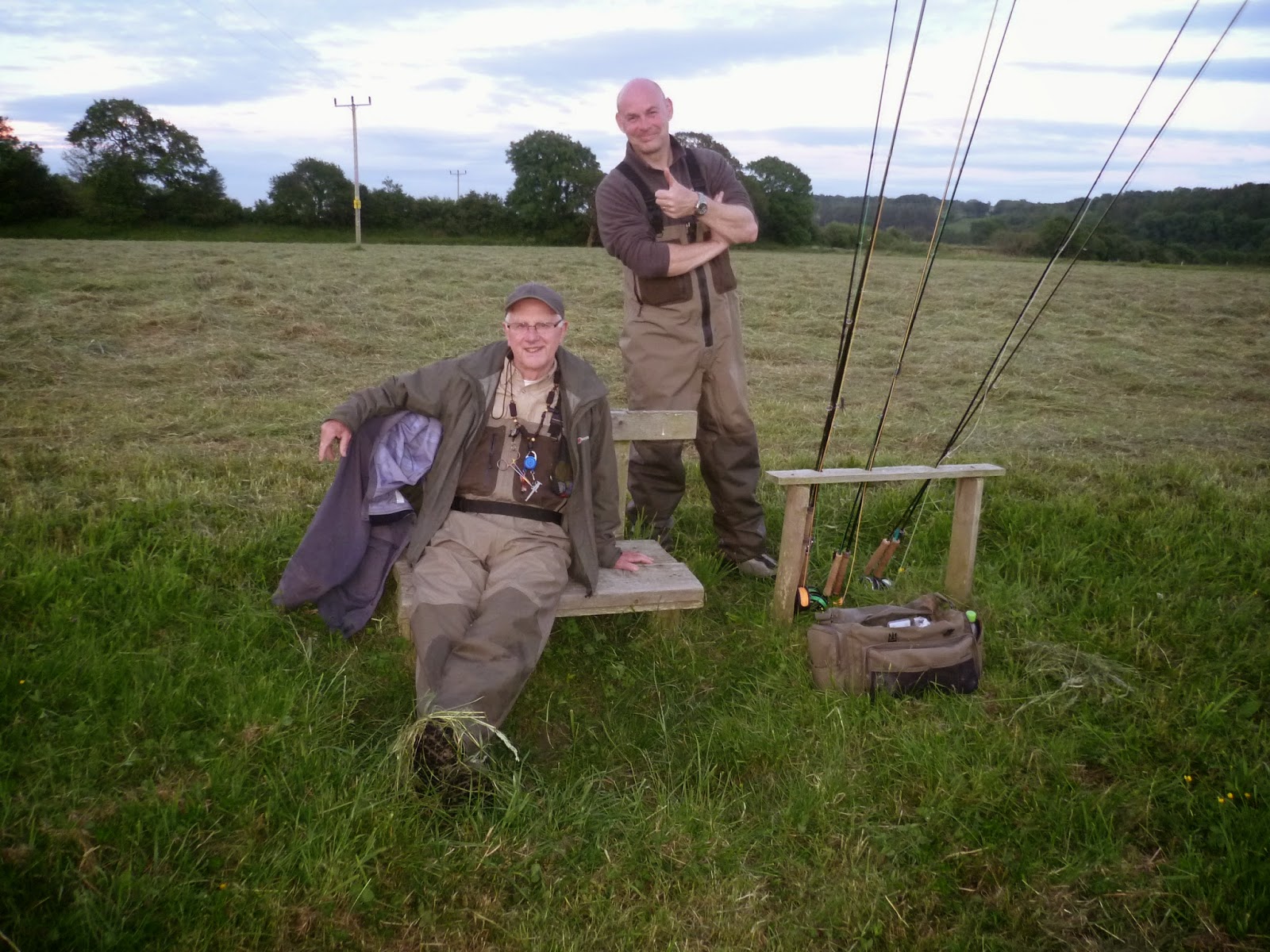 A relaxed Rowland waiting for dusk on the banks of the Cothi
We started on the Cothi just as it was getting dark with Ian leading the way down the beat.  We were all kitted out with chest waders and entered the inky black water carefully using our feet to feel the way.  Basically you cast downstream across the river at 45 degrees or less and let the fly swing across the river until it hangs downstream of you.  Then you step downstream a pace and do it again.  Ideally you cast into areas with some structure that may hold fish just out of the main current.  So there we were about 50 yards apart working our way down the beat poised, waiting for that magic tug on the line.  Suddenly a huge full moon poked out from behind a cloud and lit the scene turning the blackness to light grey.  Although it made the casting and wading easier, because we could see a bit, many prefer totally dark moonless nights in terms of catching!
Having exhausted the Cothi beat to no avail we moved down to the more challenging main river and the Junction Pool where there was a lot of water coming down.  Andy dispatched Ian to wade across the Cothi using a rope that was conveniently strung across the river so he could fish the top of the pool.  Then further down Andy entered the water to check it out and soon found himself in above the waist, he worked his way out into the middle but found it a bit challenging due to the force of the current and the uneven bottom.  I then attempted to follow him, having been warned that the bottom couple of steps on the ladder had been washed away.  I made it into the water and following Andy’s route slowly and carefully edged away from the bank.  When I reached a point where the water was up to my crutch, and I could feel a depression in front of me, I belatedly did a risk assessment noting that:-
1.       I was not wearing a PFD (personal floatation device)
2.       I did not have a wading stick
3.       It was now pretty dark because the moon was behind the trees
4.       I didn’t know the river and Andy had mentioned a LARGE hole!
5.       I didn’t want to make my wife a rich widow!
So I chickened out!
Roland had a brief wade downstream where it was a bit easier and eventually Andy managed to work his way back to terra firma somewhat damp.  No serious fishing had taken place except by Ian who didn’t find any fish.  By this time it was 3am and we were all a little tired.  Back at the caravan at 4am we crashed out and dreaming about large fiesty sewin, slept till about 10am.
My next post will describe some scenic spots and the Welsh versus English fly fishing battle.
Posted by Unknown at 05:54