The Best Present I Have Ever Received!

A year ago I retired from working as a professional engineer at the age of 66.  I had started life as a student draughtsman at the age of 16.  I had thought I would be allowed to slip away quietly but my colleagues had other ideas.  They put on a farewell lunch for me and my wife, Rosalind and I were overwhelmed by their kindness.
As well as giving me a personalised card featuring some of my fishy moments whilst running the company’s fly fishing club, they presented me with two gifts.  The first gift was an ancient book on engineering (sourced from a second hand book shop by Darren Parker a former boss) which my director Norman Greville urged me to read so I could stay abreast of developments in the industry!
The second gift was the best present I have ever received (discounting things like children and grandchildren).  Having felt that the wrapped box weighed just over a kilo (2lb 4oz in Christian units) I had absolutely no idea what it could be.  However, I could see my boss Martin Bennett grinning from ear to ear so I knew it was something special!
On opening the package I found it was a working model (complete with driver) of an early classic car called an “Autostirling A1”. 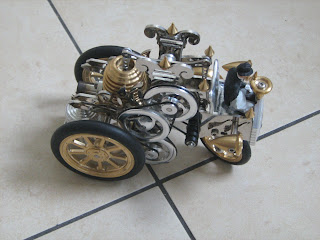 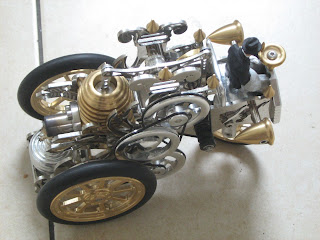 This model vehicle fuelled by methylated spirit uses something called the Stirling Cycle (heating and cooling of air) to provide the motive force.  The model is an engineering masterpiece.   Enough of the techy stuff,  to appreciate just how brilliant a present this is you have to see it working.  Please click on the video.
The present was sourced by my much respected engineering colleague, Arthur Portelli , who demonstrated its performance to everyone present by firing it up and running it up and down the lunch table!
Since then I have the regular pleasure of firing it up to demonstrate to grandchildren, family and friends the best present I have ever received!
Footnote:  The car was manufactured in Germany by a company called Boehm.
See www.boehm-praezision.de   Just in case there is someone you would like to spoil!
Posted by Unknown at 23:59