My youngest daughter’s father-in-law, Mark, invited us to stay in the house he was refurbishing in South Wales.  How could I refuse?   I started planning a bit of serious fishing by contacting my friend Andrew, an ace sewin (sea trout) fisher.  Andrew thought we could get out one night during my stay. Serious sewin fly fishers only fish during the hours of darkness, the darker the better.  That is quite challenging!  Imagine casting a fly in complete darkness whilst standing on the bank or wading.  You jump out of your waders when a large sea trout jumps in the dark.  It sounds as if a cow has fallen off a bridge!
Sadly my pal Andrew was not able to get away so we did not have a sewin session, however, I visited some amazing places (see previous post) and was able to take a trip down a fishing memory lane that turned out to be very pleasant when I visited:- 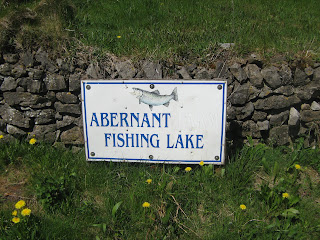 This fishery is quite hard to find as it is on the north side of the B4287 between Neath and Pontrhydyfen.  However, it is well worth visiting as it is picturesque, with a wonderful view of Swansea Bay in the distance.  It generally has very clear water and is well stocked with hard fighting rainbow and blue trout.  When I ran my former company's fly fishing club I used to hold very successful events here. 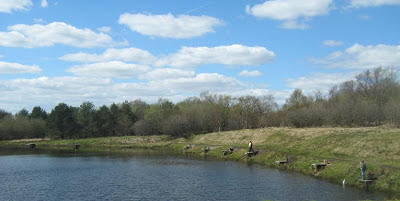 The fishery manager is Dave Price and the cost of fishing is very reasonable. 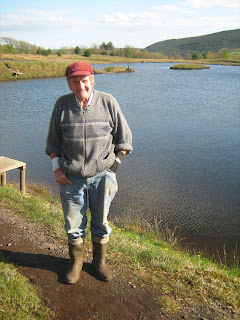 I was pleased to see that since my last visit, a couple of years ago, the windy, undulating track up to the fishery had been tarmacked and could now be regarded as a road. 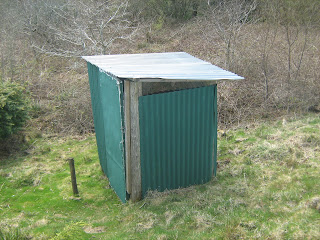 Also the privy (loo, or bathroom as my friends in the States call it) had been rebuilt (I bet the old one blew away, hopefully whilst vacant!). 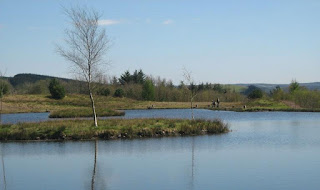 When I arrived around 2pm it was overcast with a light breeze and I could see fish rising and one or two being caught.  I bought a 2 fish ticket from Dave in the caravan (used as a rest area and office) as I didn’t plan to be there long. 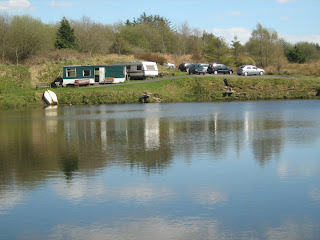 I thought I would definitely force myself only to use dry flies and catch off the top.  It didn’t work out like that.  By the time I had set up the sun was out and my dry sedge was ignored as the fish went down.  Occasionally, as a small cloud drifted across the sun a fish would rise and I would try to cover it but all to no avail.  I moved around a bit as most of the other anglers had “bagged up” and left but still no action.  Reluctantly I decided to fish sub surface and switched to a small grhe (gold ribbed hairs ear) fly.  I did a long cast to a fresh location and started a very slow figure of eight retrieve.  I then experienced that state of mind when you become completely at one with the environment.  You are so in tune that you know something is going to happen and when the line went tight, and I hooked up, I knew, that I knew it would happen!   Am I a fish mind reader?  I wish I was.  The fish was a strong one hooked at a distance so I had plenty of time to enjoy the tussle as I watched the bar of silver flashing back and forth.  Several jumps later and all 3lb of it was safely in the net. 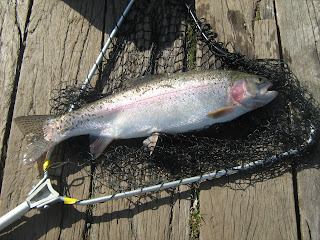 When I had to leave I came away with my 2 fish, Dave generously giving me a large blue that another angler had left behind (I hope he does not want it back)!  The fishery rules are simple and clear.  Dave wants everyone to have good sport.
﻿ 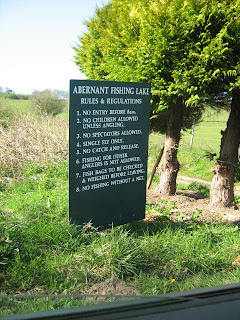 So my trip to Wales may not have been a fishing bonanza but an afternoon spent at Abernant was magic!
Posted by Unknown at 10:39