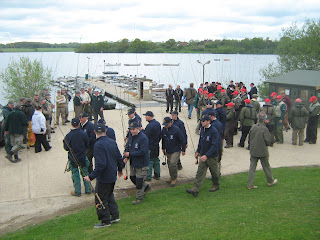 I have just enjoyed a most interesting day at Bewl.  No, I was not fishing myself I was watching others fish In the International Fly Fishing Association Spring Match.  My role was that of "Boatman".  This involved sitting in the boat for eight hours between two competitors to assist with things like operating the drogue, netting and dispatching fish if asked, and making sure the participants played the game according to the rules.
The whole event was very serious and professional with teams from Ireland, Scotland, Wales and England. I was impressed to see it started with a parade behind a Ghurka Piper. Please watch the videos.


The fishers I had to support were Con Malone from Ireland and Paul Lee from England. 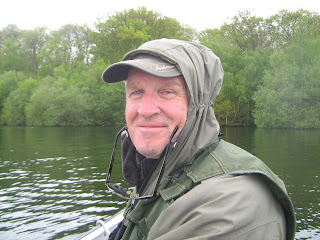 Con was a splendid fellow with a lovely sense of humour and an amazing selection of flies! 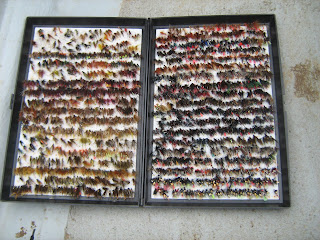 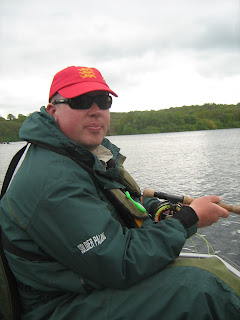 Paul was equally splendid and worked hard at positioning the boat and helping me to perform my role.  Paul had an amazing array of tackle. Paul's collection of lines all clearly labelled!
At 10 o'clock the horn sounded and 28 outboard engines roared alive and 56 fishers were off.  Paul took us just south of Bramble Point and we drifted there for half an hour before he picked up two fish in quick succession.  When it went quiet we went to the far end of Hook straight.  There were fish showing there and the house martins were working the water.  Buzzers were ignored so Paul switched to little, very buoyant dries (secret specials) and picked up two more fish. They then tried the open water east of the cages and a drift towards The Nose to no avail.  Paul said Tinkers had fished well earlier in the week so we motored down there.  Lots of birds working the water but only a couple of fish showing so no action apart from a rather nice perch.  Then it was back up Bewl Straight with a short pause near the woods on the north side.  A couple of fish showed but they were not feeding.  The next thing we knew it was 17.30 and we had to start heading back to the jetty.
The cold north easterly wind had definitely put the fish off as several fishers had blanked.  I didn't stay to find out who had won, I was just too tired, but one England team member told me he had caught one whereas his boat companion had caught eleven!  That would have upset me!
So did I learn anything?  Yes I did and here is the list:-
Would I have fished it differently?  Yes I think I would have done the following:-
The competition organisers and the staff at Bewl need to be congratulated on a well- organised event, the fish should be reprimanded for not cooperating! 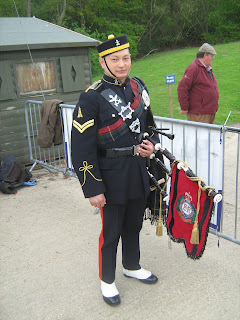 Possibly it was the sound of the pipes that put the fish off!