EATING, HAVE WE IN THE UK MADE PROGRESS IN THE LAST 60 YEARS

My friend Christa sent me this and I just had to share it, you have to be approaching my age to fully appreciate the changes.

EATING IN THE UK IN THE FIFTIES 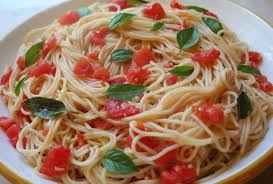 Pasta had not been invented.
Curry was a surname.
A takeaway was a mathematical problem.
A pizza was something to do with a leaning tower.
Bananas and oranges only appeared at Christma time.
All crisps were plain; the only choice we had was whether to put the
salt on or not.
A Chinese chippy was a foreign carpenter.
Rice was a milk pudding, and never, ever part of our dinner.
A Big Mac was what we wore when it was raining.
Brown bread was something only poor people ate.
Oil was for lubricating, fat was for cooking
Tea was made in a teapot using tea leaves and never green.
Coffee was Camp, and came in a bottle.
Cubed sugar was regarded as posh.
Only Heinz made beans.
Fish didn't have fingers in those days.
Eating raw fish was called poverty, not sushi.
None of us had ever heard of yoghurt.
Healthy food consisted of anything edible.
People who didn't peel potatoes were regarded as lazy.
Indian restaurants were only found in India .
Cooking outside was called camping.
Seaweed was not a recognised food.
"Kebab" was not even a word never mind a food.
Sugar enjoyed a good press in those days, and was regarded as being white
gold.
Prunes were medicinal.
Surprisingly muesli was readily available, it was called
cattle feed.
Pineapples came in chunks in a tin; we had only ever seen a picture of a
real one.
Water came out of the tap, if someone had suggested bottling it and
charging more than petrol for it they would have become a laughing stock.

The one thing that we never ever had on our table in the fifties …. Was
elbows!
I am still amazed when I offer to give a friend or neighbour a fish to cook and eat how many people say no thanks I wouldn't know where to start!
Posted by Unknown at 05:06