So to celebrate BT finally getting my Broadband back up and working I decided I needed to check on the trout fishing at Bewl Water personally. I shelled out on an eight fish ticket and an evening boat (£40, say $60).  Spoke to Rob Nixon on the jetty who said try the area near the dam.  It was 3.30pm before I started fishing but it was over cast with a nice breeze producing a ripple and I could see fish moving on the top.  I had a floating line with a long leader and a team of three flies.  Small booby on the point, hopper on the middle dropper and a daddy (crane fly) on the top dropper.  I had put the small white booby on because in the August Issue of the Bewl Angle, the Editor, Ray French had mentioned in one of his brillant articles that competition anglers were finding them very effective.  Well my third cast proved that to be true as the booby disapeared in a splash and I knew I was into a good fish.  It rapidly stripped loose line back onto the reel and then went seaching the depths.  Eventually I got it to the top and was glad I had my long handled landing net with me. 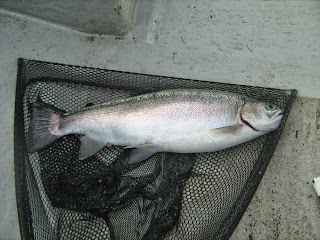 As you can see it was a lovely 3lb blue trout, in tip top condition.  Sadly he had destroyed my one and only small booby, but I solved that problem by taking my scissors to a larger booby, snipping away at the boobs!
It was half an hour later before I hooked my second fish, a 2lb rainbow also on the booby.  Then the sun came out and the wind veered and things went quieter.  There was still the odd fish showing, sometimes right next to the boat, when my flies were 30 yards away!  Eventually, and rather belatedly, I decided to fish sub surface and put a cats whisker on the point but I did not get any further action and time ran out.  I also got rather cold. I am a fool, I know it is always worth wearing plenty of layers when you out on the water.  So now as I write this I am developing a sore throat!  Still it was great to be out on the water and feeling a couple of good fish pulling a bend into the rod.  I shall be back for more as the autumnal sport hots up.
Footnote:  As I get older I find my fingers seem thicker and my eyesight dimmer.  This makes tying knots more challenging especially with the fine tippets I use on the streams.  This summer, I saw Rowland, one of my former fly fishing pupils, quickly tie a knot using a pair of small long nose pliers.  This reminded me that I had inherited from my American stepfather an old original Orvis Cinch Tie (a rather clever knot tier). See picture. 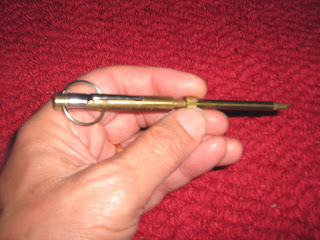 I checked the Orvis catalogue and they show a different version called a "Winder" which comes with a DVD presumably to show you how to use it.  It is priced at £22.50. Remember time spent messing about with knots means less time that your flies are doing what they are meant to be doing i.e. attracting and connecting with fish!﻿
Posted by Unknown at 14:35