Well I finally managed to steal away from family, projects and chores and headed for the Whiltshire Avon.  As I had not been on the SADAC club waters for something like three months I headed to "The Cart Shed". This is the club's office and home of Andreas Topintzis, the General Manager, and very helpful top (what's happening where) guru! Following a friendly greeting Andreas proceeded to recommend I fished the Avon as the Whylie was a bit "hit and miss" at the moment. As the weather was going to be very warm, with bright sunshine he suggested beats with plenty of tree shade and he made it clear that during the day it was "nymphing" if I wanted success.  So I settled on beat 18 as I had fished it before and knew at least half of it had good tree cover and could be waded. 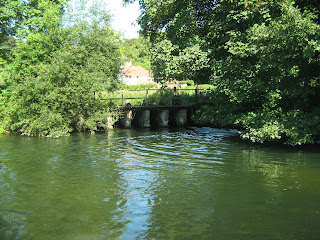 Beat 18 has at its top a hatch pool.  The hatches are used to control the level of water in each section of the river. 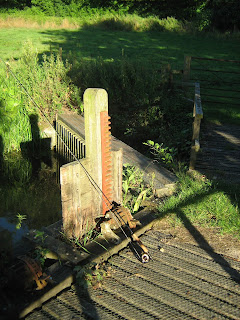 The hatch lifting mechanisms are a tribute to old fashioned engineering and have weathered the passage of time. 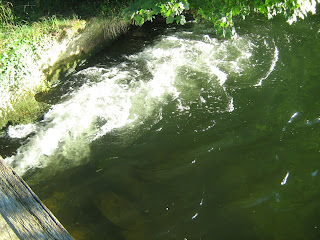 With summer flows low and only one hatch passing a lot of water the hatch pool is one big whirlpool and I could see some big fishing waiting for food to be jetted towards them.  Sadly I have never found a way of getting a fly or nymph in front of these monster fish.
As it was so hot I decided to forego my chest waders, and having forgotten my thigh waders, so I decided to "free wade".  I unzipped the lower half of my fishing trousers and laced my wading boots up tightly.  I then forced myself to walk quietly down stream to the start of the beat, watching out for fish.  Having seen plenty of fish I started to work my way up stream on the bank covering the water that was in full sun.  I caught a few "little fellers", then when I got to the wading section I slipped into the cool water (which is always deeper than you think) and commenced to creep up on some decent fish.  I found I had to relearn my nymphing technique as I was out of practice coping with the fast currents. I caught a couple more fish and got to familiarise myself with more of the beat and then had to quit around 6pm so as to get to my daughter's for supper!
The next morning saw me fishing at West Amesbury and I had a blast.  I parked in the recreation ground and walked down to the Ham Hatches bridge where I watched the huge trout dancing (and presumably feeding) in the deep pool just below the hatches. 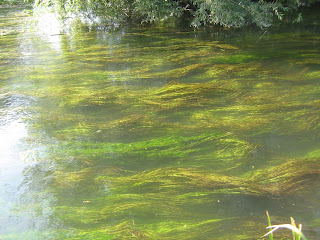 I had a look upstream but the ranunculus looked a bit daunting so I headed downstream checking out the water for fish as I went. Enroute I found clear evidence of someone poaching! 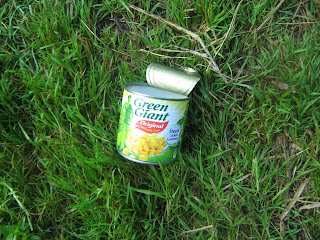 I picked up the can as I hate seeing litter on the river bank and it's a club rule that you are responsible for collecting any litter even if it is not your litter.  I did wonder what would happen if the bailiff saw me with the can. 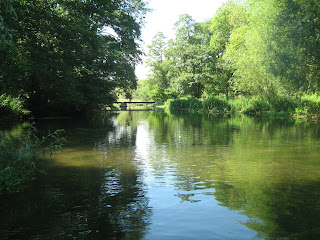 Having got down to the Allenby Bridge I decided to walk on a bit further as I had seen a splash!  As often happens fish seem to show where getting at them can be quite challenging or even potentially dangerous.  Fortunately being a well run club warning signs were in place. 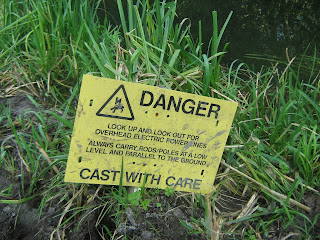 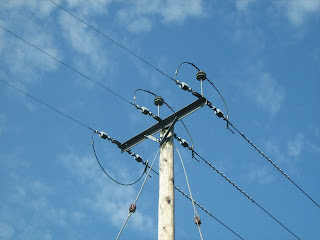 Eventually I managed to cover a fish without any drag and was rewarded with a half pound brownie. So I walked onto the next beat and watched a gentleman laying a nice straight line on the water in classic upstream nymphing style. 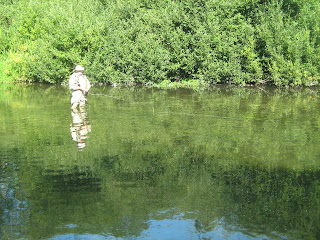 We exchanged a few pleasantries and names and he kindly allowed me to take his photograph.  Sadly, I didn't write his name down, I do hope he forgives me and the picture compensates.
Now you have been waiting for the action and this is when it starts.  Working my way upstream I soon spotted some serious sub surface activity in the wading section.  Entering the water and using a tiny gold-head nymph I started to get touches.  Refining my technique with a very straight up stream cast and a quick retrieve, so there was no slack between my hand and the fly, I started to pick up good-sized fish, mainly brownies, but one whopping grayling.  Sadly I also caught a large brown that had one side split open by a preditor!  He put up an energetic fight and was obviously feeding so I decided to return him to the river. 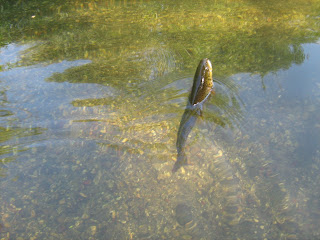 After a frantic hour in which I caught five good-sized trout and four grayling, things calmed down and I had a break.  Whilst wading elsewhere I first noticed a heron banging around in a tree on the edge of the river.  At first I ignored it but then roughly under where it had been I noticed a twitching reed with something really bright flashing where the reed entered the water.  This went on for sometime so I decided to investigate.  Well the flashing was caused by a vertical reed moving in the current lifting a horizontal reed lying on the water.  As the reed was lifted the film of water on it was catching the sun and flashing like a natural heliograph.  Having solved the mystery I was just about to move away when I saw a movement in the water between the reeds and the bank. Wow, there were between fifteen and twenty large torpedo shapes quietly swimming there and some of them were honkers!!!  Concious that I was in full view of them I eased myself away downstream putting a bush between them and me.  I then started on developing my strategy.  How could I cover them when I had to fish upstream, dodge overhead branches and avoid the massive weed bed with the reed sticking up out of it between them and me?  After a few minutes deliberation, you cannot rush opportunities like this, I felt I had a plan, albeit a risky one.
Having manouvred myself into position I cast a few metres upstream of them and as the line drifted downstream towards the vertical reed I flicked the line gently over it. The next thing was one of the fish broke ranks and presumably chased the nymph as the line went tight and I was in and he was on!  Before the fish realised what was happening I managed to get him to the top and over the weed into open water where he went ballistic.  Eventually I got him under control and brought him to hand where I used the old trick of turning him upside down.  This disorientates the fish and they stop struggling enabling easier unhooking.  The crucial thing is to turn them back the right way up before letting them swim off  your hand. 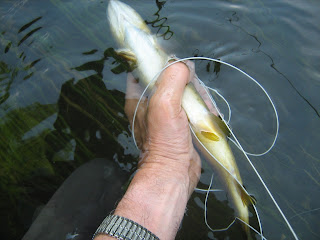 I was pleased to see that the quick exit of their companion had not disturbed the other members of the shoal so I decided to see if I could manage a repeat performance.  Well I spent the next hour and a half trying to cast to these fish to no avail, I just could not get the presentation right, but it was great fun trying and as I close my eyes I can still see them there.  I retreated exhausted, concious that I had a long drive ahead.  It was a priceless experience I will always remember. Thanks for letting me share it. 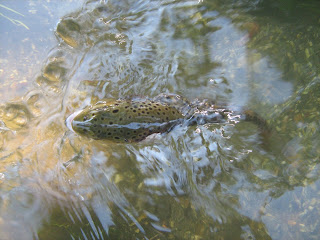 Incidentally as I was leaving the fishery I was politely stopped by a club bailiff who asked to see my membership book.  This I gladly handed over for him to check and sign.  This friendly policing of the water helps maintain the quality of the fishing. 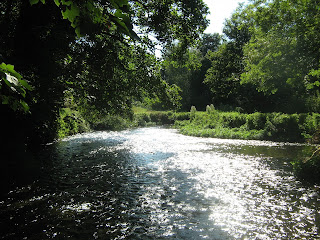