Fly Fishing a Chalk Stream Paradise, worth every mile! 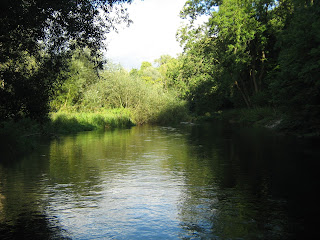 As things slowed down on the M25 motorway I asked myself “Is it worth driving over 100 miles for some fishing?”  My answer to myself was “I am going to a beautiful river, with crystal clear waters and lush vegetation.  I will probably meet the odd friendly person fishing and see wonderful fish and enjoy the solitude of standing in or by the river.  If I can trick a few fish into taking an artificial fly, steer them safely through the river’s obstacle course and bring them to hand for a quick photo opportunity and a safe release then it is all worth the miles!  For a few brief hours I will be in paradise.


So what happened?  I parked up at the recreation ground, noting another vehicle with a club sticker on the windscreen.  Having donned waders etc and decided to use my old Sage 9 foot 4wt rod I headed for the river.  At the bridge over the Ham Hatches I could see the monster fish darting back and forth as they fed on the nymphs jetted towards them by the water rushing through the hatch restrictions.  Normally you cannot get a fly to them, but I decided to try using the Czech nymph approach.  I have never used that much as generally the waters I fish are not deep enough.  In the space of 15 minutes I had hooked two twelve inch grayling, both released to grow on.


I then walked downstream only to find a grandfather and his son in the river at the beat I had fancied fishing.  No problem, there is plenty of river; I think the club has something like 26 miles of water.  I asked if they minded me fishing 100 yards upstream of them and they agreed.   Having entered the water I then had a frustrating time of hooking trees and vegetation and losing flies!  This was exasperated by the fact that my eyes were watering in the breeze and I was having trouble getting the fine leader through the eye of tiny gold headed nymphs.  Whilst all this was going on I kept quietly moving upstream conscious of the two anglers downstream of me also wanting to move upstream.  Eventually it all came together as having spotted a few brownies lying close to the bank I managed to tempt one into a take.  She immediately (yes I think it was a female) took to the mass of vegetation and I managed to swim her downstream through the ranunculi (up-steam would have been fatal, with everything catching up).  There was still a bunch of vegetation wrapped around her head so rather than using my net I brought her to hand and with the rod tucked under my arm proceeded to lift the debris off her head.  In doing so I also must have released the hook because with one violent movement she was back in the water, heading for safety!  So no photo opportunity for either of us!


I then decided to take a break and drift back to the car for a sit down and a sandwich.  As I got back to the bridge I found a middle aged lady standing on the bridge trotting bread down over the very excited monsters below.  I wasn’t sure how to react, was it poaching or was there some local tradition that allowed non club members to fish from the bridge?  Anyway she was very pleasant and I wasn’t going to spoil her day or mine by challenging her.  So I watched.  Eventually she hooked up and landed a nice brownie of around a pound, after a quick photograph I released it for her having made sure it had fully recovered from the experience.  By this time another couple of fishing gents had arrived and I joked with them that I would probably be sent to prison for aiding poaching!  The lady then departed to e mail the picture of the fish to her son on the other side of the planet and I got to eat my sandwich.


After a brief lunch I walked the bank upstream spotting fish lying in close to the bank and trying to tempt them.  When I got to the wading section I quietly entered the water and slowly moved upstream.  At first I didn’t see much but there were fish there and as my eyes adjusted to the light and conditions I started to see plenty of fish.  Whilst standing next to a large bush, changing a fly, three large fish moved in, right in front of me just a rod’s length away.   They were in less than 18 inches of water.  Keeping my movements to a minimum I started casting trying to get the fly in the water a couple of yards upstream of them.  Then the phone rang and like a fool I answered it.  It was an update on a burglary that had happened at a church I am an honoree facilities manager for.  I then tried to make a call and got my old fishing pal, Richard by mistake.  I told him where I was, he was at work.  I mentioned the fish in front of me and he kindly recommended trying the “induced take” method.   I didn’t tell him that the water was coming towards the fish at around 5 miles an hour!  The lesson worth learning is “leave the phone in the car”! 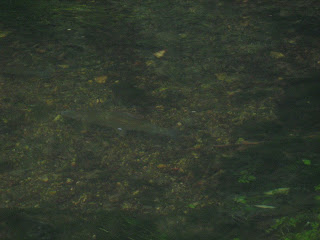 It was a big fish just under my rod tip.
Eventually I spooked the fishes and returned to the car.  I popped in to see my daughter and family at Andover on the way home.  In the car I had what we use to call a soap box cart I had built and I wanted my seven year old grandson to get to drive it.  My session with him was a great success; he started out a bit nervous about driving it but after about an hour had mastered steering and was fairly good at stopping!  So finally a rather tied granddad headed for home.


What a wonderful day it had been, well worth the driving!
Posted by Unknown at 02:24