I am not a particularly competitive person by nature but I do like to occasionally “have a go”, so I signed up for the Bewl Bridge Fly Fishers annual bank fishing competition.  I did so because I like to support the club, get to know more members and learn from watching others.  Yes, and it is another chance to get out for some fishing.  This proved to be a well-organised event run by John Benfield, the club’s competition guru.  I duly arrived, had a sausage sandwich in the sailing club café and joined the queue of 41fishers to pay my £35 entrance fee (which covered my 8 fish ticket and the evening meal).  Financially it does not come better than that.  For my fishing friends in the States that’s around $50. The ping pong ball with my location number was then drawn and it was blue bank number 13!  Fortunately I am not superstitious.  Now of the 17 miles of shore line there were 3 areas of bank being fished shown by black lines.  Blue bank was from Bramble Bay to Pine Bay.  The other bank locations were around Dunsters and Rosemary Farm. 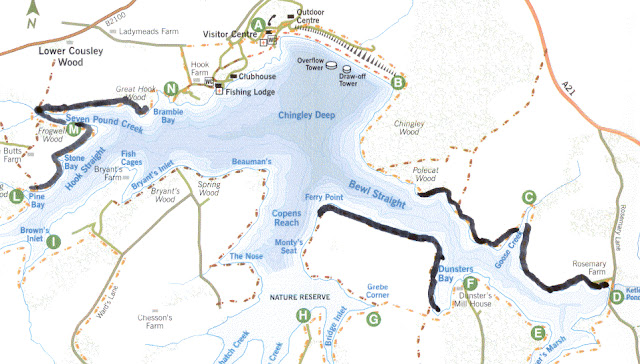 The anglers fishing those locations got transported from the Fishing Lodge by the fishery’s dory.  My group got to leg it from the car park to the clearing at Bramble Point where we assembled in sunshine and a cold breeze prior to the walk off. 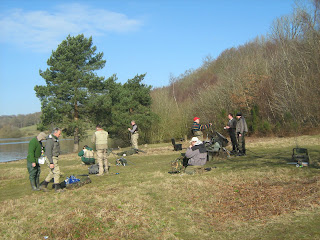 The walk off is done in numerical order starting with the lowest number drawn.  As I was number 13 I had to watch 12 other fishers select their position prior to me adopting one.  The idea is that after lunch the walk off order is reversed, but that didn’t really work as our group did not assemble again for lunch as we were too spread out. 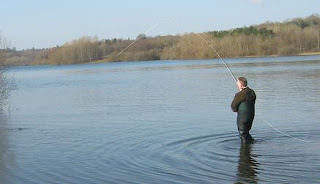 At Bramble Point there was already a non-competition angler fishing and he had banked a few fish, so we were all optimistic when at 10.00 we entered the water for the first 3 hour session.  Because the reservoir is so full we had to wade out around 30 yards to get thigh deep in the clear, but very cold (4 C), water.  My location wasn’t ideal but it was good enough to cover fishable water. 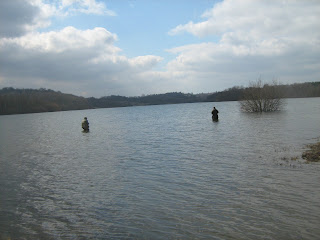 Gary who was fishing down-wind of me picked up a couple of fish in the first hour on slowly retrieved boobies, so inspired by him we were all trying hard.  Another chap with a red cap on who was fishing down wind into the bay using naturals (I think) had 4 fish but apart from that we all blanked.


After lunch, having got really cold in the morning, I moved round to Seven Pound Creek out of the worst of the wind, where I could fish without wading.  Then the sun came out and it was very pleasant.  However, the fishing did not improve, the odd fish were caught but considering the number of competent anglers fishing it was disappointing. 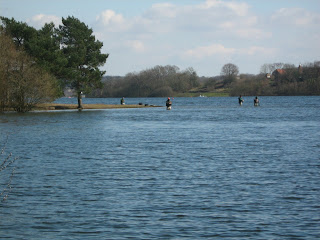 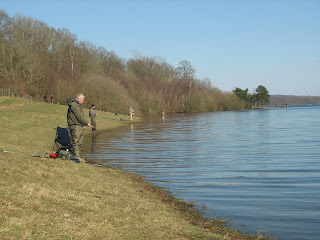 Seven Pound Creek in the afternoon sun
No fish were topping and I tried everything I could think of, starting with an intermediate line with a team of lures, followed by buzzers under a bung (there were a few flies coming off the water) and finally a Di 3 line with a booby on the point and a couple of lures on droppers.  I even fished blood worm patterns deep.  At 17.00 we called it a day and walked back to the weighing in.  Surprisingly the other banks had also not fished very well, with quite a number of fishers blanking. 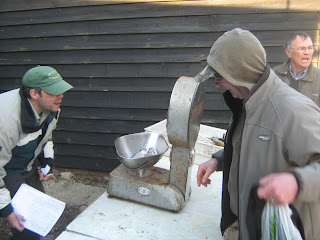 Things started to improve when we got back to the club house and we enjoyed an excellent meal, lots of banter and the results.  The overall rod average was very low 1.66 fish per competitor.  There were winners and runner-ups announced for each bank.  The most fish caught by an individual angler was 6 (total weight 12lb 10oz) and two others had 5 fish each.  Bert Short caught the biggest fish weighing 3lb 10oz.
So to sum up, the fishing was a challenge, the weather mixed, the water very cold, the organisation excellent and getting to know other members of the club brilliant!  The official report of the event will appear, courtesy of Ray French, in the next edition of the amazing “Bewl Angle”, the club magazine.

Foot Note: I have just been on the club forum and here is an "official" statement.


Congratulations goes to the overall winner, Tony Fox who caught six fish near Goose Creek. The top rods on the day were as follows:

Many thanks go to Andy Lush from Friendly Fisherman for sponsoring the competition and providing the prizes; Tracey and the catering staff at the Yacht Club for providing a superb hot meal and pudding; and to Howard and all of the staff at Bewl for helping out and making sure that anglers were delivered safely to the correct banks.