So far this season I had bank fished and as it was early season had done reasonably well, but today I only had a half-day available, so to speed up the process of finding the fish I decided to take a boat out.  You can have a half-day boat from 3 pm and the cost of an 8-fish ticket and the boat hire is £40 (say $60) which seems reasonable (especially if you bag up).
A chap in the car park had “bagged up” and he recommended Canoe Club Corner, this was confirmed by Jackie in the fishing lodge.   Jackie and Janet who run the lodge are always most helpful as they want fishers to have a positive experience. 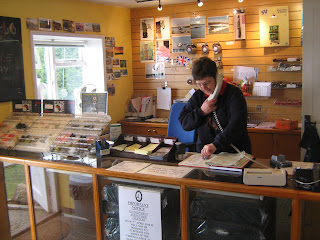 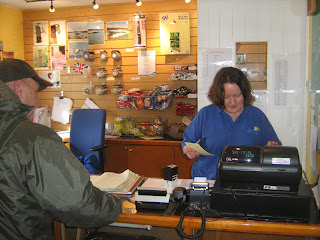 Janet collecting the cash!
Jackie assigned me a boat number and I collected my life preserver en route.  Because it was my first day “on the water” I carefully ran through my mental check list regarding boat equipment.  I noted that the assigned boat had oars, rowlocks, a bailer (useful for urinating into if you are a chap)!  However, it did not have an anchor.  I don’t usually anchor but I like to have all the options available.  A quick call to Jackie (01892 890352) at the lodge and I was re-assigned to a fully equipped boat.

Having arrived at Canoe Club Corner I watched the 2 boats already there to see how they were fishing it.  They were both on the drift with drogues out.  A drogue is an underwater parachute which slows the down-wind drift of the boat keeping it broadside to the wind.  They were drifting very close to the dam.  The following video clips show them fishing.  Put your sound on to hear my comments.  The video is a bit shaky because I was bouncing around in the waves!
Drifting this close to the dam you have to know what you are doing, and they did!
Two's company, three's a crowd!
I set my drogue up and joined the party trying to maintain a reasonable distance from the other boats and not to motor across their drifts.  I tried out my new Airflo Lake Pro WF8F (weight forward 8 weight floating) pale mint line using the 10 foot rod Airflo Forty Plus NanTec 7/8 rod I had bought at the club auction.  The line sailed out like a rocket and floated like a cork so I was pleased.  Still after 2 drifts the 2 cormorant flies had not been touched so I switched to my other rod rigged with an intermediate line.  I felt I needed to get a bit deeper as there was quite a lot of wave action on the surface.  I had a gold-headed blue flash damsel on the point and a cormorant on the dropper.  Immediately I had a take, but the fish did not hook up.  Then I connected and boated a nice 2lb blue trout.  A couple of drifts later I boated another larger blue.  Then it went quiet and so I decided to move. 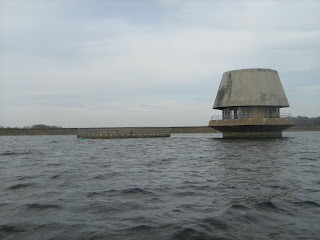 I have never seen the lake (reservoir) so full!
The wind was from the south so I joined several boats drifting the edge of Chingley Wood up towards the dam.  No one was catching and they all moved off.  I then, with one other boat, tried the corner of Chingley.  They caught in close, but I wasn’t seeing any action so I motored across to the Bewl Straight side of Ferry Point and watched 4 bank anglers.  They were catching fish so being careful not to get too close (50 metre rule) I had a few casts from about 150 metres out.  It seemed to go a bit quiet and I was starting to get a bit cold so I moved on up to The Nose.  Here it was out of the wind and flat calm.  I spotted a fish moving at distance and covered it using my new floating line.  It hit the cormorant hard, it was another blue. 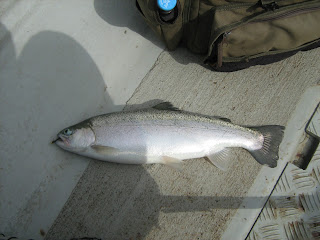 First fish using my new Airflo floating line.
Shortly after that I had another 2 fish , all blues.  Then I got a text from my son asking to borrow the car so I packed it in and headed for home!  Back at the jetty the fishery team had just recovered the afore-mentioned anchor lost by someone earlier.
NB   A previous post has a map of Bewl Water showing the locations mentioned.
﻿
﻿
﻿
Posted by Unknown at 00:41