Fly Fishing: It’s not just what you catch, it’s also who you meet!

Today, I finally decide, forget the cold windy weather I have to get on the bank and so, after I had dropped my wife off to do some Family History Research, I headed down to Bewl Water.  I didn’t actually start fishing until around noon (usually the time the fish start their afternoon siesta).  As it was cold 6 C and very windy I decided to fish the north bank at Rosemary’s Lane and I asked a dog walker to take my photo just to prove I was brave enough to be there. 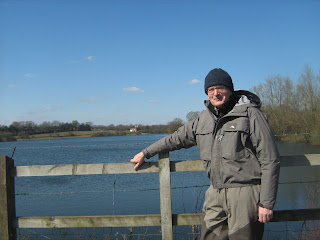 I fished by the oak trees but it seemed a bit quiet.  Another angler joined me and I went over to say hallo.  Hidden under a flashy warm “cover everything” hat and New York cop shades was the famous John Hancock Treasurer of the Bewl Bridge Fly Fishing Club.  We hid the hat so it would not damage the camera! 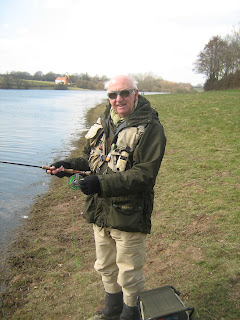 John, alias “Sooty” is the source of the much enjoyed joke page in the club magazine.  One of his more repeatable offerings is “Jonathan Ross has been accused of shoplifting a kitchen utensil from Tesco.  Ross said it was a whisk he was prepared to take.”
John is a very accomplished angler and a “star” in his support of the club and the fishery in general.  He mentioned he had caught a fish further up the bank by one of the commemorative benches and so I wandered up there.  After about 20 minutes I hooked and landed a nice fish using an intermediate line with a white minkie on the business end.  Note in the picture my high tech priest!  I got fed up with leaving expensive fancy priests on the bank so I took a piece of plastic electrical conduit, forced a lead sea fishing weight up it, and wrapped some electrical tape around the end.  It works well, the fish don't seem to mind and I have never lost it! 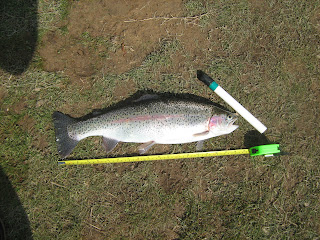 ﻿
Another angler called Mike joined us and proceeded to completely out fish me, this was partly due to the fact that I kept moving about into locations that were exposed to the strong icy wind.  Then I would give up and try somewhere else.  I was hoping to find a shoal so I could “bag up” and retire. 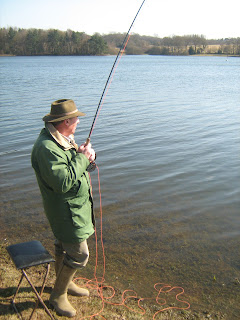 Mike had the good sense to persevere where he was, out of the wind and in the sun (as you can see he had a deck chair).  I even switched from my intermediate line to a floater like Mike’s and tried similar flies to him.  He was kind enough to let me photograph his excellent home tied flies and to video him landing some of his fish.  (The video takes a minute or so to load, so be patient!) 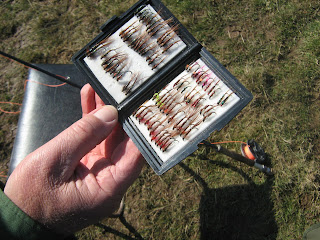 I did not have a very productive session but I did meet some lovely people and I enjoyed seeing the sun at last. 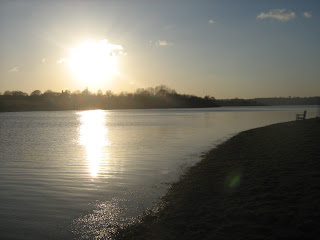 I definitely need more practice!﻿
Posted by Unknown at 14:50