FLY FISHING WITH A BROKEN WRIST

In my experience the most common fly casting fault amongst newcomers learning to cast is the broken wrist.  No, I don’t mean they fracture it and end up in the hospital casualty department (or the ER) screaming their head off!   What I am talking about relates to what happens to the wrist on the back cast. This is where the wrist is allowed to flex backwards taking the spring out of the rod and resulting in the line tumbling to the water in front of the caster on the forward cast.  You probably know what I mean as I think we have all done it. 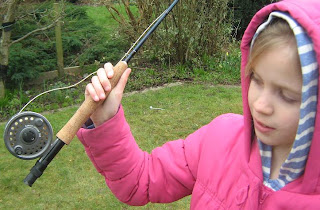 Here is Emily (granddaughter age 10) learning to cast and slightly breaking her wrist!
Let us review some of the basics of fly casting:-
1.       The line is a long linear weight and we are casting the line, not the fly.
2.       Because the fly is attached to the line by the leader when we cast the line, some energy is transmitted down the leader and that in turn moves the fly.
3.       The rod is a spring and also an extension of the arm.
4.       When we use the arm to accelerate the rod through an arc, the weight of the fly line slightly bends the rod, loading the springiness of the rod.
5.       The loading of the rod spring, plus the movement of our arm, allows the fly line to be projected smoothly, if done properly, some distance.
6.       Casting a fly is more about the timing of the loading and unloading of the rod than it is about using strength.
Now if we consider a simple overhead cast the basic moves are:-
1.       Rod tip down just above the water.
2.       Smooth lift to 10 o’clock, note the surface tension of the water on the line starts to load (bend) the rod tip down.
3.       At 10 o’clock, without pausing, immediately accelerate and lift the rod until the thumb is vertical (by the side of the ear) and the rod at 1 o’clock. (The acceleration Joan Wulff calls a power snap, which is quite a helpful graphic description others refer to it as a “flick” as if you were trying to flick some mud off the rod tip).
4.       A pause whilst the line flies out up and behind and loads the rod tip i.e. bends it backwards (so it has energy to spring forwards).
5.       The instant the rod is loaded the rod hand is pushed forward and this movement plus the spring in the loaded rod projects the line forward.
6.       Ideally, the rod is then stopped at 10 o’clock whilst the line projects forward and when it is fully extended the rod and line are lowered so the whole line rests gently, we hope, on the water.
Now if, during 4 above the rod tip is allowed by a floppy or “broken” wrist to carry on travelling back, the rod remains straight, does not get loaded and the forward cast degenerates into a "chuck" rather than a cast.

Now with some novices this broken wrist action can be so bad that the rod not only passes through the horizontal, the rod tip can actually touch the ground behind them!!  (Poor rod tip, the ground always survives.)
So how do we correct a broken wrist?  Well, I use a stepped approach along the following lines:-
1.       I explain why it is bad to break the wrist.  And if that does not work …..
2.       I show them the 3 finger spacing rule.  And if that does not work ….. 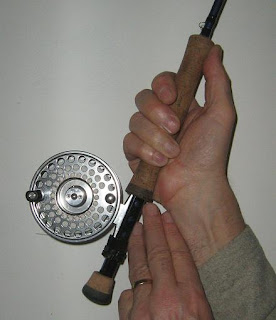 3.       I stand behind them with my arm held up high and tell them they owe me money if they hit my arm with the rod on the back cast. And if that does not work …..
4.       I threaten them with a physical restraint.  Some smile when I say that!  My physical restraints come in a variety of forms.  If they have a long-sleeved item of clothing on I get them to put the end of the rod handle down the sleeve. 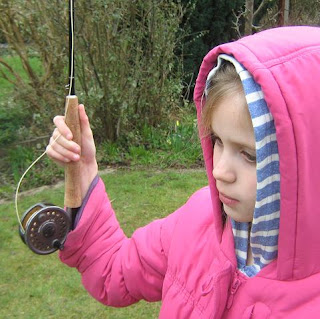 ﻿
﻿
If that is not an option then I use one of the following:-   lady’s elastic tight tops; Velcro strap, rubber inner tube. 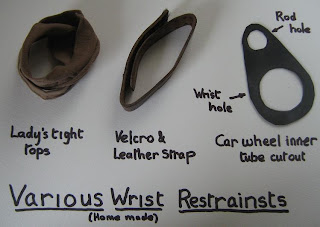 ﻿
The lady’s tights tops always get a lot of interest from elderly gents!   They are good because they are elastic and you can adjust the tension by employing more loops round the wrist or round the rod butt.  Now the physical restraint should allow a little movement of the rod backwards, and the caster will feel it is a bit awkward, but they usually do not fail to agree that as a result their casting has suddenly improved.
One time I was teaching a colleague, let’s call him “Bob” (as that was his name).  In spite of doing all the steps above Bob still kept executing back casts that resulted in the rod ending up in a horizontal plane.  He would vehmently deny that he was doing it!  One time he even hooked a sheep on the back cast!  Needless to say he didn’t land it!  The fascinating thing for me was that he was in complete denial that he was breaking his wrist to a colossal extent.  In the end I resorted to "plan X" the video camera and the statement “the camera doesn’t lie”.  Bob can cast quite well now and we are still friends.
Now before the casting experts “beat me up” let me add that when a caster has got a feel for the timing and the rod action, yes, we do use a bit of wrist action!