The weather forecast was warmer, dry but windy (SW) so I had to give it a go.  Having got my ticket from Jackie in the lodge, I spotted Rob Barden coming back from dropping a couple of bank fishers off so I waited for him so I could say hallo and get some advice as to which banks were fishing well. 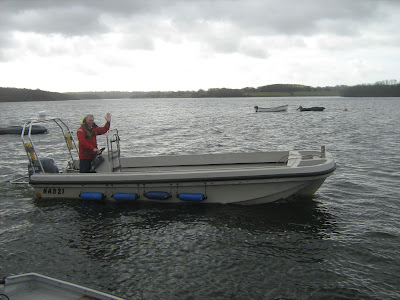 Rob is a splendid chap and a great fly fisher, this year he is fishing for Team England.
Rob suggested I tried Rosemary's Lane so I jumped in the car and headed south down the A21.  The entrance to the Lane is hard to spot unless you remember the Arena Attractions have their yellow sign at the entrance.  Having parked on the mini dam I decided to fish the windier north bank hoping the wind would have pushed the fish close into the bank (also you don't need to wade).  I caught a hard fighting 2lb blue on a cormorant fly on my 3rd cast,  This is going to be easy I thought, so I changed the fly thinking I would try to catch each fish on a different fly.  The green and white lure did not work so I went back to the cormorant.  The wind got up and veered making safe casting tricky as you can see from this! 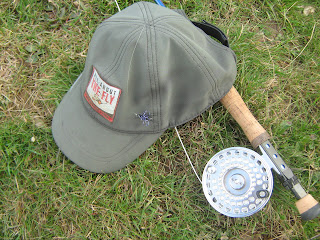 ﻿
﻿
﻿
Cormorant stuck in hat!
Another fisher came by and informed me that he had seen a fisher on the south bank catch several fish.  So I decided to move.  On the south bank near the dam I caught another two fish and then it went quiet.  So I went back to the car put my waders on and went further up the south bank wading out in front of the trees.  I fished a team but the cormorant on the point accounted for three more fish and a black/green buzzer for one more.  Twice I felt a slight take, just like getting an electric shock up the line.  Each time I moved the fly slightly and was rewarded with a savage take.  I only noticed the slight takes because I was "fishing tight", for a definition of wha I mean by that see my post "How to hook more fish" posted 4th March 2013.  My phone went off and my wife reminded me she needed the car so I had to call it a day. 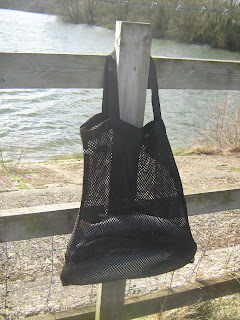