Years ago I was lucky enough to come across three copies of a wonderful fishing diary at a “jumble” sale.  Having flicked through a few pages I immediately bought all three copies.  Two copies have been given as presents but I still have my own cherished copy. 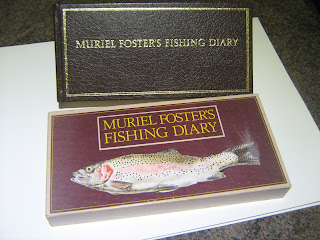 Muriel Foster’s Fishing Diary covering a period from 1913 to 1949.  Fishing diaries are often kept by keen fishers, but Muriel Foster’s diary will interest even folk who have never walked the sparkling banks of a stream or brook.   Amongst the detailed accounts of locations, flies used and fish caught are wonderful illustrations of everything enjoyed in that environment all meticulously set out.  The good news is that you can still get it on Amazon. Here are some typical scanned pages:-


·         Years later you can read about a particular trip (one that you may have forgotten) and still get enjoyment out of the rekindled memory.


·         You can remind yourself of what was successful and what didn’t work on particular waters.


·         You can remember the friends you made and the special fish you caught.


·         Above all, if you are lucky you can avoid making the same mistake twice (like forgetting to take your wading jacket when you are flying halfway around the world)!


Here is an extract from my fishing diary dated July 2009:-
“Found an interesting tackle shop at Carnation (WA, USA), it was in a pale yellow house opposite the entrance to the Mac Donald Memorial Park and camp ground.  Later I met the owner on the pebble beach at the confluence of the Snoqualmie River and the Tolt River at the back of the camp ground.  He told me that when the sun was high in the sky the ospreys sit in the trees above the river waiting for migrating salmon and steelheads to pause whilst they made up their minds as to which river to take.  It is an ambush!” 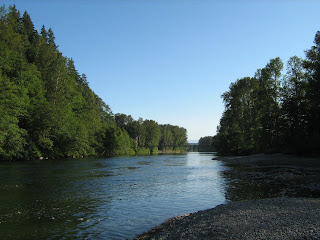 Junction of the Snoqualmie and the Tolt.  Ospreys sit in the trees on the left.﻿
Here is another dated October 2011:-
“It was pouring with rain on the west side (WA, USA) so I drove east through the spectacular mountains to Ellensburg and then down the legendary Canyon Road wonderful high desert scenery with the road tracking the Yakima River.  Stopped at Red’s Fly Shop, collected some flies (tiny gold head nymphs) and advice.  I blanked probably because I fished the easy to reach stretches that are over-fished.  A few days later, Shayne at Church, told me he fished a bit further upstream using a dry with a suspended nymph and caught lots. 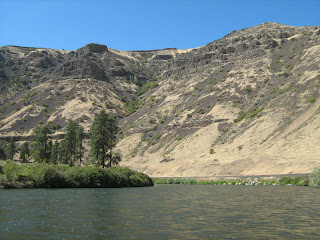 The Canyon stretch of the Yakima.﻿
Last year on a chalk stream (river Wylye in Wiltshire) 29th May:-
I worked my way upstream and met the friendly bailiff Jedd who suggested I tried an emerger.  Just upstream of the “slab” pool the emerger was hit by a big fish!  A “tug of war” commenced between fishy fins, assisted by the current, and me, assisted by my eight foot rod.  Suddenly realising that pulling wasn’t helping, the fish shot towards my bank some 4 yards downstream from me.  To my horror it dived into a large array of branches all connected together.  I knew it was still hooked as I could feel the rod tip pulsating as the fish swayed in the current.  I rejected plan A "pulling", and plan B "giving it slack", etc and settled on plan Z.  So still keeping tension on the line with my rod arm I slipped off boots and socks and unzipped the bottom of my lightweight fishing trousers (not easy to do one handed).  I then flattened the stinging nettles between me and the water using my landing net and slid down the bank into the water.  Fortunately the cold water only came up to my knees and the bottom was firm.  Still holding the road in my right hand I tried lifting the main branch with my left.  Being water logged it was much heavier than I had expected and I thought I was going to fail to shift it, but a strange thing happened!  As I lifted the branch the current caught it and floated it downstream and clear.  But I was not “out of the wood” yet (joke), as my line, leader and trout were under another branch.  I thought I was facing failure but decided it was worth having another go at clearing the obstacles and the same thing happened.  The branches when lifted drifted down stream.  Now its lair had been discovered and removed the trout shot back into the middle of the river and battle recommenced with me netting it a few minutes later.  It was a cracker and completely unscathed.  A quick photo to record a bit of “extreme fly fishing” and it was slipped back into the river. 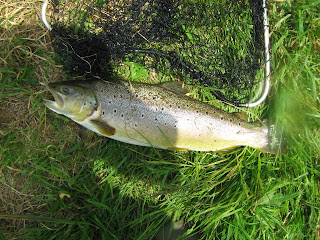 Being able to experience fishing like that is a treasured privilege that needs to be remembered and shared.  My blog is my new diary, try starting yours.