FLY FISHER IN TROUBLE WITH LADIES BECAUSE OF THE BOOBY

Oh dear!  I expect to be sleeping in the shed tonight!  I made the mistake of mentioning “booby” in my last post, which then got seen on Facebook by my daughters and a niece!  So in an effort to recover the situation and stay out of the shed (which is damp, dirty and has spiders) here is my defence.
Fly fishermen (and ladies) don’t just use artificial flies to catch fish they also use artificial lures.  A lure is something designed to look like a small fish (a lot of fish are cannibals) or something else edible.  The booby is a very effective lure for trout, because it is very buoyant as it has two polystyrene balls attached to make it float.  Sometimes they are coloured to look like large eyes. Some bright spark decided to call this type of fly a “booby” for reasons that might appear obvious from the picture. 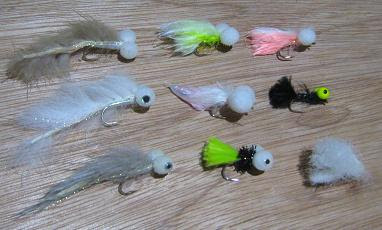 Being a bit naïve the significance of the name didn’t occur to me for several years!
My favourite technique for fishing the booby when the fish are just under the surface is to strip the booby quickly across the top of the water.  The trout chase them and can be seen chasing by the bow wave they produce behind the booby.  Sometimes the trout just turn away, sometimes they hit the booby and don’t hook up, but fairly often they connect and you have a fish on.  Booby flies can also be fished effectively on a sinking line as they get dragged under and buoyantly provide quite a big target for hungry fish!
So with an apology to the fairer sex (who usually make very good fly fishers) I rest my case.
PS:  Needless to say we don't use the booby on chalk streams!  You would end up in prison!
Posted by Unknown at 11:34