Danger on the river and a friendly Sheriff

Now that I knew there were plenty of large aggressive steelhead in the Skykomish I resolved to have another attempt at catching one. As it was the 4th July and for some strange historical reason my American friends make it a holiday I decided not to try spinning or plunking under the hatchery as I was sure the guys would be there in large numbers.  Standing shoulder to shoulder, crossing lines and getting tangled up with another chap's tackle is known as "combat fishing" and it is not my idea of a pleasant time by the water.  So I thought I would fish further down stream and try to see if by learning from the last time in that location I could over-come some of the obstacles.  So this time I had a home-made wading stick, wore a personal flotation device and used a full sinking line.  Anyway the net result was that in spite of carefully wading quite deep my 9 foot 8 weight rod was still not getting me to where I thought the fish would be, so after an hour of trying I quit and walked back to the car,  As I had come 40 miles to fish I had a go spinning etc just down from the Big Eddie boat launch ramp.  By this time several lovely families had arrived and I watched in horror as a couple of dads launched themselves in a very small, beat up, row boat into the Big Eddie.  They didn't row it but used the oars as paddles. They were not wearing PFD's and only just made it to the bank just upstream of some fairly serious rapids. 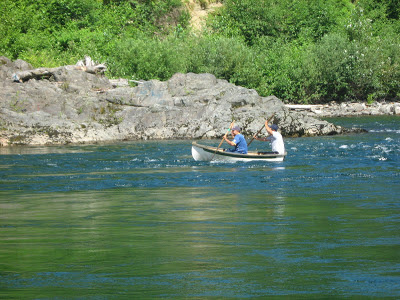 The picture makes it look safer than it was, they were wobbling like crazy!

They then proceeded to fool around and several times had to paddle flat out to avoid being swept downstream.  This was all done in front of their wives and children none of whom seemed aware of the potential danger.  As I walked back to the car I said to the wives that I hoped their husbands had plenty of life insurance!

Whilst getting in the car I noticed that the Sheriff had arrived so being inquisitive when he walked back from the river I wandered over, introduced myself and asked him if he could explain the difference between the roles of the Sheriff and the police. 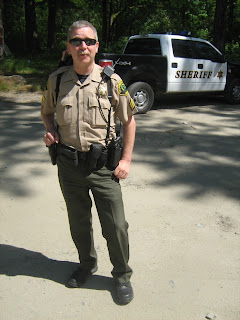 He was very friendly and explained that he was a deputy and that the Sheriff was elected by the community and that they worked closely with the police but did not do detective work.  I said I was concerned about these dads downstream with their little boat.  He said that he had come down because he had a call saying that there was some dangerous activity on the boat ramp.  I told him where the dads were now and he said that 2 days ago he had pulled the body of an 18 year old out of the river. Then he went off to warn the Dads and I jumped in the car for the cruise back to my holiday home and a rest as that afternoon we had been invited to a 4th July party on the lake!  On this holiday it's all go!!!