STEELHEAD ACTION ON THE SKYKOMISH

With the decorating nearly complete and already two thirds of the way through my six weeks here in WA, USA I was starting to get desperate to catch something worth boasting about, so I decided to have a go for summer steelhead.  Lonnie had shown me the car park by (the) Big Eddy just up the Reiter Road Junction on State Route 2.  So I paid a visit on the 2nd July with my fly rod.  Near the road bridge the water was ripping through and the Big Eddy was in full swing.  I followed Lonnie’s advice and walked up river pass the following sign and along the bolder-strewn beach, close to the water. 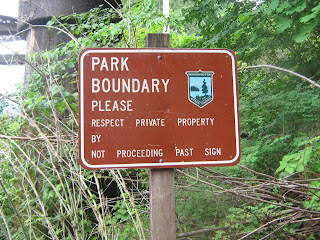 I think I had read somewhere that if you were in the water you weren’t trespassing! 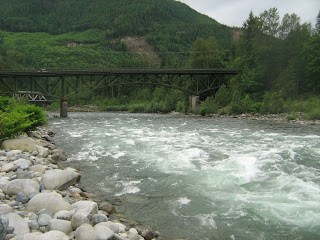 There was a lot of water coming down and I wished I had checked the river flows web site before I drove the forty miles!  So I moved upstream and when I got above the white water I waded out and had a few casts.  It immediately became clear that:-


1.       My nine foot eight weight rod was not really man enough for the job of launching a sink tip and a steelhead fly as far as I wanted it to go.


4.       I had forgotten anything I ever knew about spey casting (and all the American derivatives, snap T, circle C etc).


I was also concerned that I was not getting the fly deep enough, but I had no idea of what deep enough was.   Anyway after an hour or so I chickened out and went exploring.
I decided to try and find the steelhead hatchery which I had been told was just upstream of where I was fishing (and confirmed the night before using good old Goggle Earth).
So I drove up Reiter Road and just as I was about to give up I came across all these vehicles parked up at the gate of the hatchery.   I walked through the gates and there was one of the amazing phenomena of fishing in the US a sign inviting you to fish at the hatchery where all the returning fish congregate! 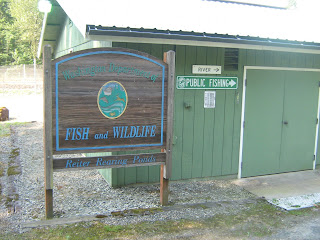 I walked the bank, spoke to a few friendly guys and checked out their techniques.  They were all gear fishermen spinning, float fishing and plunking! I watched for an hour, apparently some fish had been caught earlier but now things seemed to have gone quiet. 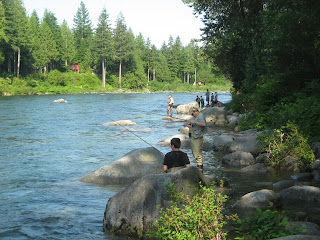 That night I dug out an old telescopic spinning rod and some spinners and resolved to join them.  So this morning having woken at 6am I hit the road arriving at 7.30 to find fourteen vehicles outside the gate.  As I was walking in a chap called Brian had just wrestled a steelhead on to the bank and he kindly let me take his picture. 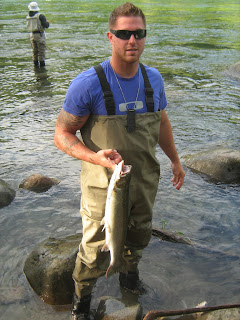 I found a spot between two nice guys and commenced fishing a rooster spinner under a float.  Avoiding hooking up is a bit challenging as everyone is using different methods and trying to avoid casting across each other.  This is made more difficult because the float men like to let their lines drift as far as possible.  Anyway I only got caught up with others twice and everyone was very amenable.
Then I got to see some action, I had a fish on but he came off so I had to make do with videoing others in action.  In a way it was good preparation for me because the steelhead I saw caught went absolutely ballistic when hooked.  Also the river is a minefield of obstructions and potential snags. The following video clips try to capture the drama of having a fish on!
The next clip shows how feisty the fish is when it is netted.
And here is the end product and a very happy man with a big fish! 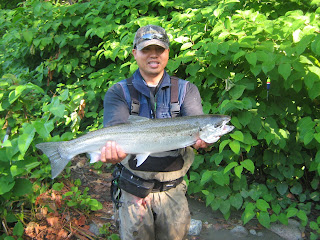 So now I am convinced they are there I just have to try harder!!!!
Posted by Unknown at 22:54