Still determined to catch something memorable I agreed with my son Daniel when he suggested we took his son Harrison salmon fishing in the Puget Sound (salt water).  He still remembered the huge king salmon his brother Jason and Jason's son Sam caught.  So we made arrangements with All Star Fishing a charter company, based in Seattle, we have used before. As you can see their boats are the real deal and are especially equipped for the Sound. 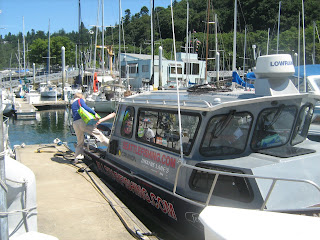 Rosalind decided to join us and here she is gracefully stepping aboard. 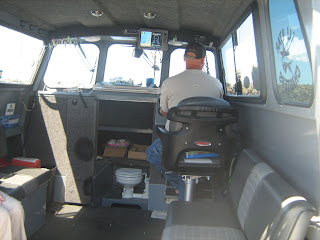 The boat is fully equipped with everything you need, fish finder, safety gear and a loo see above (there is a sliding door)! 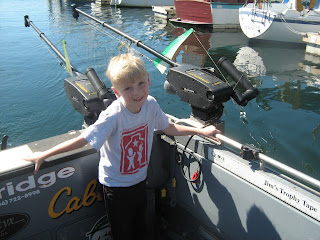 It was all for the sake of Harrison age seven.  We went for the afternoon 4 hour exclusive charter, knowing that the fishing is usually better on the seven hour morning trips, because we did not know whether Harrison would enjoy it or not. 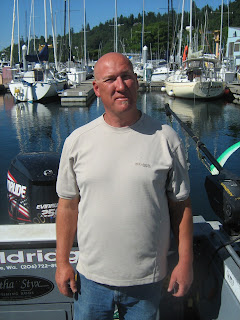 Nick was our Captain, a splendid guy, who explained everything and was patient with us when we did things wrong! 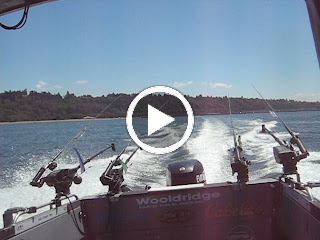 Rosalind was a bit surprised by how fast the boat went and how bumpy it was to caress the waves at 25 miles per hour en route to the fishing ground! Try the video and see for yourself! 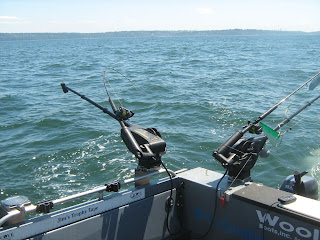 We were trolling for salmon and the four outriggers support large weights which hold the fishing lines at different depths.  As soon as a fish hits the lure the fishing line is released from the outrigger clip and the outrigger weight hoisted up (by an electric motor.  Simultaneously the rod is grabbed and the fish played till you can get it to the net.  Dan had a fish on but it managed to shake the hook.  I then caught a small Chinook salmon known as a Jack Salmon. 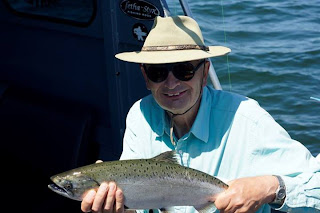 Nick tried very hard to hook us up with more salmon, setting the four lures all at different depths (24 to 70 feet) and making use of the fish finder but we did not have any more hook ups whilst trolling.  So then he pulled an ace out of his sleeve and we went bottom fishing over sand.  He rigged the three of us up with a small weight and a single hook using a synthetic bait called Berkley Gulp.  I have never had any experience of synthetic baits and I was extremely skeptical but Wham! as soon as my weight touched the sea bed a fish was on.  Reeling it in I was pleased to see if was a flatty, a flounder.  At first I thought it might have been a plaice as it had some nice orange spots but Nick confirmed it was a flounder.  He asked us if we wanted to keep flounders and was drowned out by the resounding Yes! 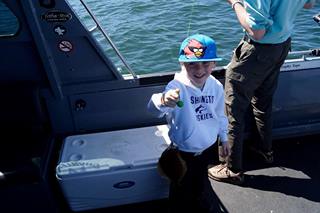 Harrison proudly showing his first flounder catch!
Well, we could not stop catching flounders one after another. At one point we were catching them faster than Nick could clean them  In the end we went away with around two dozen and they provided three amazing meals for the whole family of eight.  Most were caught on the same three pieces of Berkley Gulp.  Soon we were also catching what is known in the UK as "dog fish" (sold in the chip shops as "rock salmon")!  They had been attracted by the fish heads and guts going overboard.﻿ 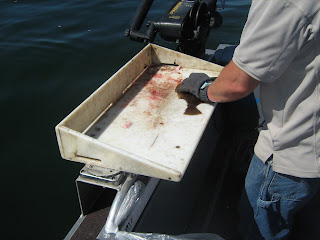 That night being both hungry and impatient I fried up a couple for my wife and I. Our daughter-in-law, Holly got her recipe books out and over the next few days came up with three different wonderful dishes, enjoyed by the whole family. 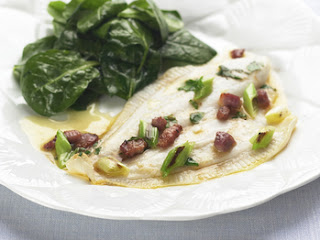 The proof of the pudding is in the eating!
﻿
Posted by Unknown at 22:00