Well I know all my fishing buddies and fans will want to know what has been transpiring on the fishy front.  So here blow by blow are the details:-

7th August - I had to cancel a beach saltwater fly fishing session with Ryan Smith owner of the Avid Angler, because I couldn't stand up!

8th August - I had to cancel a Rattlesnake Lake float tube session with Marky, same reason as above.

18th August - still very delicate but Shayne kindly took me to the North Fork of the Snoqualmie and the long walk in was good for me. He put me on the easy access beat and I caught a couple of rainbows, he fished the difficult rocky sections and caught a shed full!

20th August - to repay the complement I introduce Shayne to the Sky (he kindly drove) and to our joint delight he caught his biggest fish this year.  I had a couple of good fish drop off at the net! I didn't mind my buddy had got the one he deserved.

21st August - Shayne and I decided to have a crack at walking and wading the Yak at Cle Elum as the water level further down stream was too high for wading but first Shayne wanted to check out the tributary called the Teanaway (I think).  We popped into the tackle shop in Cle Elum, had a chat, bought some flies and got briefed.  The Teanaway was a pretty water but the flow was very low so early afternoon saw us trying to access the Cle Elum through jungle like trails.  Eventually we fished a couple of beats but it was hot and very sunny and the fish having a siesta!  Shayne rose a big fish but it decided to reject his fly. A couple were fishing near us and the gent had a few small fish on nymphs, the lady had a big fish on. General opinion was that it was probably a steelhead, sadly it broke her.  I reduced my fly size and rose a few little fellows but didn't catch.
Around 5pm we agreed that fishing the evening would probably produce but we were both tired and I was feeling sore so reluctantly we started the 2 hour journey home and I was very grateful Shayne was at the wheel.

26th August - Fished the South Fork of the Sky early morning with Lonnie, he hooked a large fish then lost it. Then he caught another good fish. He laughed at me when I had a good sized trout take my large dry fly and before I could respond it jumped several feet out of the water and spat the fly out.  I don't like trout that spit!  Driving back he told me that in late August the water is more productive in the evening so we agreed that the next time I am out we would change our tactics.

27th August - Six fish in two hours!  Yes my grandchildren out fished me at Gold Creek Trout Farm.  At their request we had a fun session and they were well behaved catching the fish on bread paste mixed with fish food in a small pond.  Six fish plus the fishing experience for less than $40.  A lot of fun. 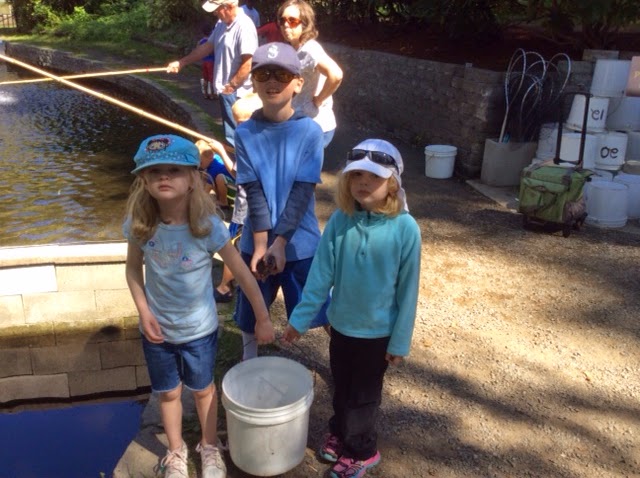 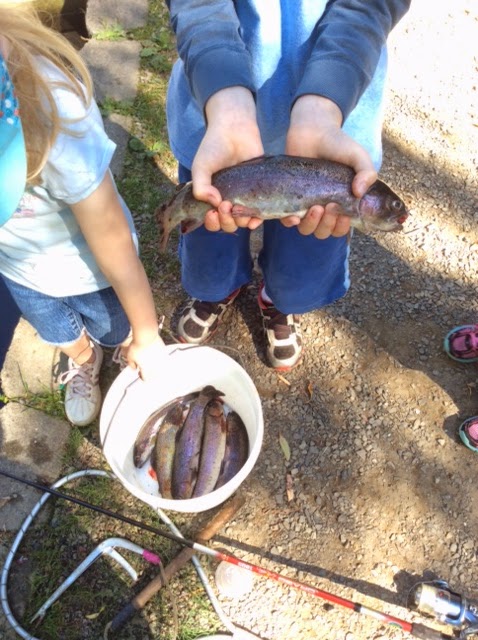 So guess what we had for dinner tonight?