Having got on well with my chores I finally went fishing today,six days after I arrived.  The chaps on the Washington Fly Fishing Forum had given me lots of useful tips on where to fish and I plan to follow that advice as much as I can.  However, I thought I would make today a practice run and fish somewhere familiar to me, so after I had laid some mortar in a remodeled fireplace I headed up to the Snoqualmie. 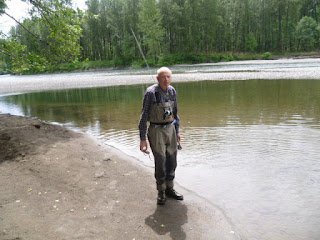 I found a promising spot and waded out to a gravel bar that had a perfect seam running along it. Second cast and my copper john was hit by an 8 inch little feller, then I realized that not only had I forgotten my hat but I had also left the camera with my wife who was reading on the bank 50 yards away.  Still I thought there are going to be others to photograph so no problem.  So everything was quiet and peaceful and perfect.
Then it happened, a helicopter suddenly showed up and started circling right above me, making a hell of a racket (sorry of that is swearing, it isn’t in the UK)!  It was so persistent hovering overhead I started to wonder why it was there.  My guesses were as follows:-


·        Then I noticed someone standing on the under-carriage skid and I thought I was about
to see a spectacular suicide attempt. 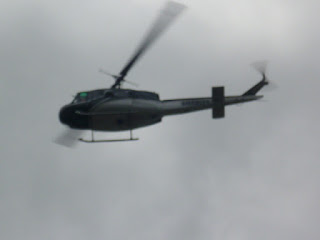 Anyway after about an hour I was getting a bit fed up with the noise so as the chopper came round again, I put my hands on my hips and scowled at it.  I was rewarded with it flying off to try and land on the face of the adjacent large mountain (Mount Si of Twin Peaks fame)?
Meanwhile having thought my wife was completely safe round the bend sitting on the gravel bank I found her in the company of two charming Park Rangers dressed in attractive orange waistcoats!  She insisted in having her picture taken with them. 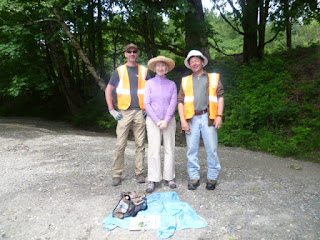 About this time the helicopter reappeared and the Rangers advised that it belonged to the Sherriff and they tactfully pointed out that it said that clearly on the side.   I expect the Sherriff is a charming helpful person but I could not help the words of a song involving a Sherriff and a Deputy running through my mind.
Armed with the knowledge that my wife was safe in the company of Rangers and with the local Sherriff keeping an eye on her from above I wandered upstream to try and find an undisturbed seam.  At a tempting spot I noticed what looked like several brown torpedo shapes in the current.  Weed?  Logs?  Both seemed unlikely given the speed of the current.  They reminded me of what I had seen a few years ago downstream of the Wallace Hatchery.  My fishing buddy had pointed to them and I in my ignorance said ‘“what are they”?  He replied by catching one and it turned out to be a rather large steelhead!   So I decided to wade out towards the torpedo’s because they just couldn’t be big fish.  As I got about six feet from the nearest torpedo it moved sideways further out by a foot or two!   I walked back to the car and tooled up with a small selection of steelhead flies.  I then proceeded to cast my selection of flies at them from all angles other than the optimum one as there was a large tree/bush in the way.  I tried going up stream through the jungle to the other side of the tree/bush but the bank there was steep and straight into what looked like deep water.  I didn’t want my last glimpse of my wife to be as I drifted downstream to the falls!
Eventually feeling rather tired I gave up but it was a hard decision to make.  The questions are:-

If you have any suggestions they would be gratefully received.

Embarrassing footnote: A real gent on the Washington Fly Fishing Forum has gently suggested that even steelhead would find jumping the Snoqualmie Falls a bit too demanding.  Blogger has egg on face. So what fish were they?
Posted by Unknown at 19:43