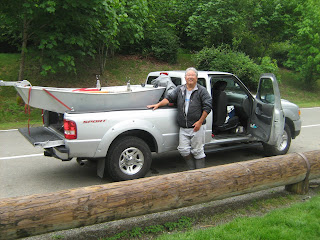 Mark with his truck and "pram"
I met a real gent yesterday and he very kindly gave me a “master class” on how to fish the bottom of a deep lake with Buzzers (Chironomidae) using a fly rod.  Mark had responded to my request for guidance on the Washington Fly Fishing Forum and he proved to be a star.  He gave me some buzzer patterns, loaned me a reel with a fast sinking line and gave me one of his special homemade plummet weights.  Now recently Mark had been fishing Rattlesnake Lake regularly and his special method had been delivering the goods big time, which was why he suggested we fished there. 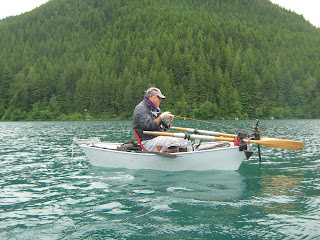 
Mark was fishing from his fully equipped 8 foot “pram” and I was in my less fully equipped float tube.  Mark and his pal had developed this particular fishing approach because a bit of arthritis had cramped their casting style and they still wanted to fly fish.  The method was to use a team of two buzzers with a small shot crimped to the leader just above the flies and measure the depth exactly by attaching the plummet to the bottom fly.  Mark had put depth markers on the main line using white nail varnish (his wife’s I hasten to add).  The first thing that rapidly became apparent to me was that you need to be anchored to work this method and keep the flies right down.  Having tried holding position with my fins and failed as it was quite breezy Mark came to the rescue producing a 5lb dumbbell from the bottom of his pram (I said it was “fully equipped”) and I attached that to 45 feet of nylon cord I had brought with me and I used that successfully as an anchor! 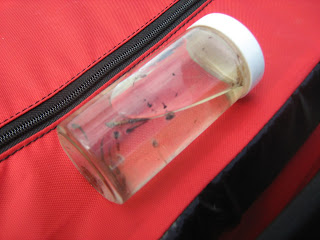 Mark gently sucked the stomach contents out of one fish and showed me what they were feeding on.  Buzzers!

Anyway to cut a long story short Mark managed 5 fish and I caught zero.  So how do I explain that?

Mark was disappointed with his 5 as he normally catches shed loads!  Although I was clearly outfished I was delighted with the day for the following reasons:-

3.       I had learnt a new technique to try on the deep reservoirs in the UK in the summer when the water warms up and the fish go deep.

4.       I didn’t sink and have to swim and I learnt that I can anchor a float tube and fish provided I have a dumbbell with me. 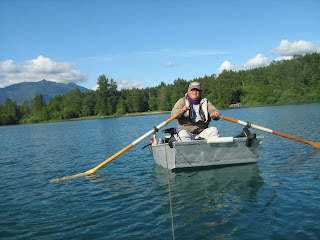 And when it was time to go and I got cramp in my right leg (and could only paddle round in circles) Mark came to the rescue and towed me back to the launch ramp!  A real star!
Some of the buzzers in the plastic container were still alive, have a look at this short video clip.
Now to get on with stripping “popcorn” off of 300 square feet of ceiling!