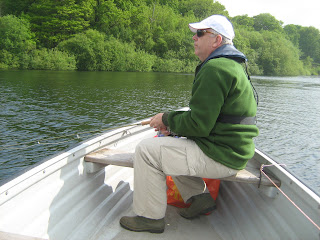 Robert Sorenson visitor from Utah on the water at Bewl

Following my challenging last session at Bewl and because I had a visitor from the USA coming to fish with me I thought I would access the expertese in the club via the club web site Forum. So here are the posts:-

My question: Challenging Boat Fishing caused by bright sun?
I took a pal out on Monday 27th May (Bank Holiday), it was bright and sunny and the fishing was really hard. We fished for 10 hours! For a full account and a map showing where we fished have a look at my post at http://breakingrods.blogspot.co.uk
I would be very interested in receiving any tips on how to cope with bright sun and clear water please? I am taking another pal (from the USA) tomorrow and I would like him to have a fishey experience. Regards Alan C

Donkey replied
Bright sun clear water? Use finer, longer leader, smaller flies. Drift don't anchor and fish slower than normal on any flies (blobs or buzzers) Even in the sun fish in the top 4ft. The clear water means fish can see anything above them and will come up for your fly. Trout don't look downwards, so the chances are they never saw half of of your fishing. The fish may well be deeper but fishing at depth is bad advice. Eeeeeooor!

Roadrunner 1000 replied
The problem you had on BH Monday was bright sun AND a strong wind. Never good at Bewl. Coupled with the fact that the wind had blown from a different direction for the previous few days didn't help either.

Donkey responded
Roadrunner is right about wind and sun at Bewl generally, but not this year. So prolific are the buzzers at the moment, the fish are stuffed with them off the wind feeding quietly on the high flooded grass. Sunday's rod average was 5.5, mostly on buzzers. Monday we brought 11 fish to the boat on the drift and a couple of other club members did better. Method in our boat was slow sink tip with two size 14 green Buzzers and a Small FAB Blob on the point, fished slowly. This was also the method used by the Scots team to take Gold medal in the Home International at Bewl two weeks ago. Advice, fish at the top known spots that are off the wind if it is strong and follow what I said in my previous commentr. Bewl is different this year, it is a new experience !! Eeeeoooor!

I replied
Donkey and Roadrunner, You are both stars, thank you very much. I will follow advice and try harder! Alan C

Pigsypete joined in
Can I ask what's a FAB Blob ? I also hear a washing line is a top method but I have no idea how this is fished, I looked it up on tinternet it showed the set up but not how it is fished.

Roadrunner 1000 responded
FAB = Foam Arsed Blob.
I've never used one myself as I've heard that the foam can bump the fish off. I'm a big fan of a standard orange blob as an attractor fly on the top dropper though.
I'll fish a washing line using an intermediate line, mixing up my retrieve and size of booby eyes. I can't recall when the washing line 'technique' become well known but back in the early (?) 1990's when Airflo brought out their first 'Clear Glass' intermediate range I used a similar set up. Early season I would fish a booby/fast sinker/short leader and if I felt that the fish had moved up in the water I used the Fast Clear Glass with a six foot leader, booby on point and a Black Pennell on a dropper. The technique usually produced a few fish.
I remember when the booby first became 'known' and reading of anglers using a fast sinking line, long leader, booby on the point, buzzers on droppers and using long slow pulls to make the buzzers rise and fall through the water.
There is rarely anything 'new' in flyfishing, it's usually an 'evolution' of a technique/method.

Meanwhile I had looked up FAB flies on the net and found a YouTube demo and tied four.  See
www.youtube.com/watch?v=oNuu8VratPc

My American fishing buddy (a friend of a friend) Robert Sorenson, and I duely fished FABs with buzzers on Friday 31st May at Bewl and we both caught on them.  Robert caught his first blue on one.  The fish ignored our buzzers, maybe they were too big.  We found the fishing hard again after a calm start the wind got up and favoured drifts got a bit bumpy.  I did manage to hook one fish in the bumpy stuff.  A particularly favoured corner got one chap at least a dozen fish.  We saw him catch 2 beautiful browns. 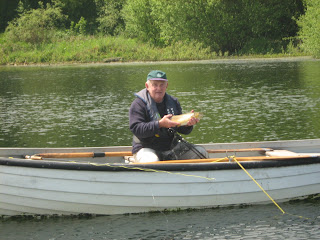 If anyone knows him please direct him to this post as I said I would send him the picture and then failed to get his details.

Around 6pm when the wind had dropped we saw some fish moving in a tiny bay in front of Hook House.  Robert targetted a fish and the video shows the action (have your sound on).


Robert mainly fishes from a float tube in the States so he was interested in our drift technique in the boat using the drogue (underwater parachute) to control the drift.  He is thinking about the possibility of developing a float tube drogue!  I am off to the Seattle area on the 6th June for 6 weeks of fishing, float tubing, babysitting and working down my daughter in laws project list!  I will try to keep you posted!  One of the first things I will do out there is visit the Washington Fly Fishing Forum! 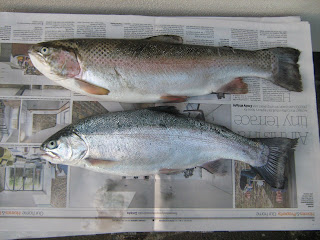 The difference in colour beween a rainbow (top) and a blue.