Let me kick off by saying that the disaster wasn't ours but it so easily could have been!  We were on the road an hour later than planned having not slept too well and then overslept.  As soon as you reach the Tacoma Narrows Bridges, (having survived the I5 etc.) you know you are entering a special place (mind you, most of WA as seen by me is special).  My first port of call in the search for sea run cuts (SRCs) or coastal cutthroat trout, as they are more formally named, was Kopachuck State Park and the Nav. System found it.  I have fished here before and caught SRCs so I was full of anticipation.  Getting onto the beach I was surprised to see a choppy sea coming in from the South West.  Casting wasn't a problem, I could put a full line out aided by the wind, the issue for me was the cloudy water.  So after a few casts and a couple of moves I decided to try somewhere else.  Before I did I went and spoke to a group of happy people who were sitting on the beach right by the waters edge eating something.﻿ 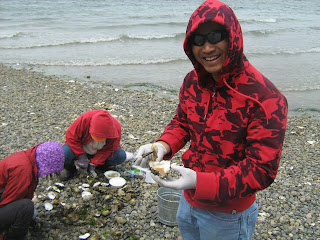 It turned out that they had collected some oysters and were enjoying them raw on the beach.  I declined their kind offer to join in the party as I did not want to risk getting sick so far from home.


So it was back in the car and off to the bridge near Purdy.  Now Reggie at Orvis had recommended fishing the beach just behind the Italian Restaurant.  As I drove up to the junction, it all looked a bit industrial and complicated and I could not see where to pull over or the restaurant and it looked windy so I chickened out and turned left at the traffic lights and onto the bridge.
I then reset my TomTom to Penrose Point State Park as I thought that should be out of the wind.  Well it wasn't, I waded and cast but there was no sign of activity.  Then I noticed on my WA Atlas that someone in the past had highlighted  a place called South Head a couple of miles further on.  This looked amazing as it jutted right out into the sea.  Eventually I found the extremely narrow South Head Road and ignoring the Private Sign drove up it.  Now I always feel a little guilty going up "private roads".  I come fishing for rest and relaxation and the last thing I want is to ruffle anyone's feathers.  Anyway armed with the thought that "I have come thousands of miles for a SRC" I pressed on, and on, and on driving past lovely little and not so little weekend hideaways.  Eventually the inevitable happened and another vehicle appeared and I had to back up what seemed like a quarter mile.  When I finally got to the little stony beach I was a nervous wreck and there were several dwellings there.  I looked around for someone to ask if it was OK to be there but I was all on my own (apart from my wife, who was hiding in the car)!  As the sea was rough and the wind, very windy I overcame my feelings of frustration and decided to beat a retreat and go and look for our B & B. 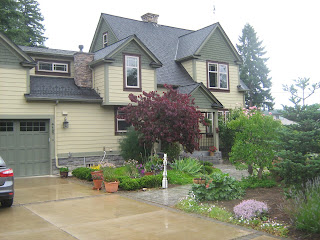 This is when things really stared to pick up.  We stayed in the perfect B & B in Gig Harbor.  It was called "The Parsonage" and I found it on the web.  It is run by a delightful couple called John and Mary who shared their beautiful home with us (together with lots of stories).  We had a charming bedroom and we were made most welcome.  http://parsonagebnb.com/amenities.html

Then they recommended a restaurant down on the harbor front called Anthony's.  At the entrance I got the impression that it was quite small, but when we got inside we were amazed how big it was and how the layout made sure you had a fantastic view of the beautiful harbor. 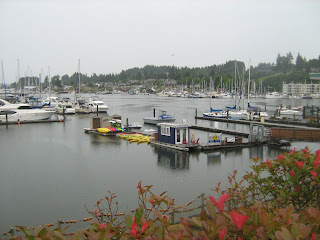 Views from our dinner table (it was raining). 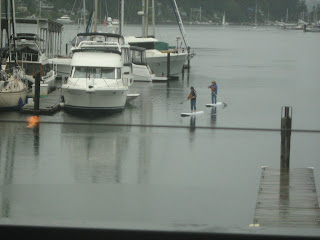 Mary had recommended the sunset special, which meant that if you ordered before 6 pm you could have a 4 course meal for $19 a head. 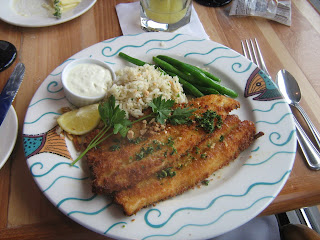 The food was excellent, in fact I had the best rainbow trout dish I have ever had, and I eat a lot of trout back in the UK. 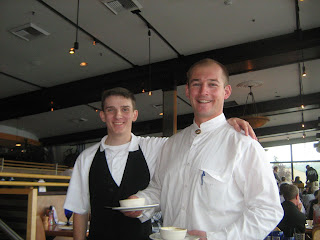 The service was superb.  This is one US restaurant that doesn't need the Gordon Ramsey treatment. 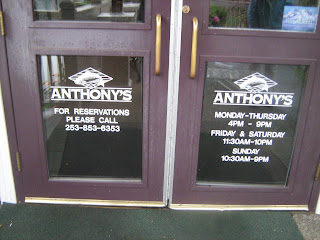 Feeling completely full we walked back to The Parsonage and watched on Netflix an episode of  Foyle's War just to remind us what the UK was like when we were born! 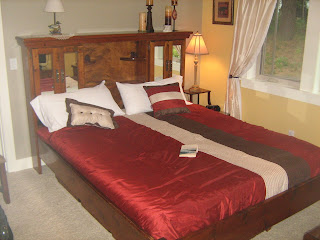 And so to bed! 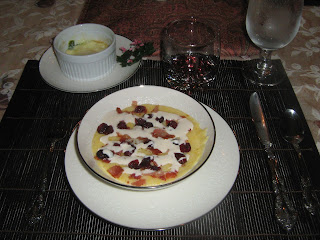 After a nights sleep and a very special gourmet breakfast we hit the road again and this time made it to the beach behind the Italian restaurant and the service station.  I got excited because there was another fly fisher there, then he left and two other guys appeared.  I quickly kitted my self out and got tooled up, got a log for my wife to sit on and then I was in the water and casting.  The location was perfect, the water was moving out still but I could not see any sign of fish.  As the water got slack a chap called Larry came and we had a friendly chat. 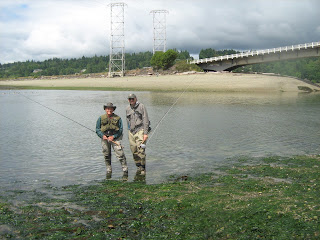 He and another guy had each caught a SRC earlier.  He quit and I had a break, then when the tide turned I had another go, but nothing was showing. 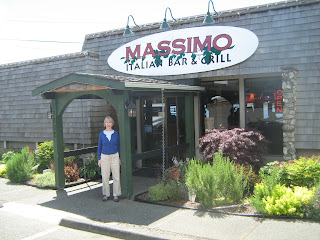 Finally I took my wife into the Italian restaurant for lunch specifying that we needed a table overlooking the sea.  Whilst waiting for my pizza I watched another fisher arrive and spey cast his way under the bridge and upstream. Then we became aware that the traffic everywhere was backing up and there were emergency vehicles whizzing around.  People coming into the restaurant were talking about a bad RTA (road traffic accident) just up the road.  As I was still waiting for my pizza I grabbed my camera and went to see for myself. 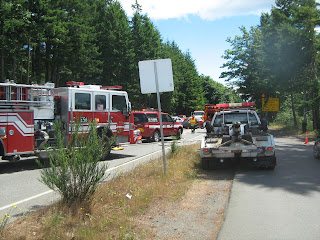 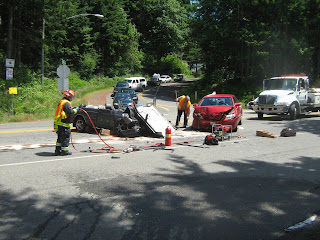 There were lots of emergency vehicles and it looked as though it had been a head on encounter between a red car and a dark blue/black car.  One car had the roof cut off presumably to get the passengers out.  It reminded me of the day before when I could have been tempted to drive across the on coming traffic to get to where I wanted to fish.  What a disaster for the people involved!  I was glad I had chickened out of trying to turn in there.
Well then we headed for Redmond and our holiday home.  Glad that in this life there are some tranquil moments!﻿ 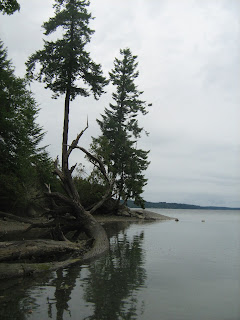 I keep reminding myself "failure cannot cope with persistence"!
Posted by Unknown at 19:57