We arrived, and to prove it we are here in Redmond, Seattle area! 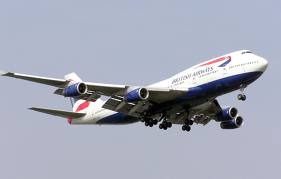 Well thanks to British Airways we arrived at Seattle none the worse for wear!  Seriously, it was one of our better flights and the time passed fairly quickly.  We had a nice talk with a couple from Kent who having been made redundant from the HSBC bank were off to cruise Alaska followed by a rail trip across the States.  I told them that I banked with HSBC so I was probably partly funding their trip!  That got a smile.  The sky was cloudless over northern Canada so we enjoyed wonderful views of snow, ice and mountains. Even the food was tasty however the trolleys used to dispense beverages etc looked as though they had been used since the dark ages!  Following one of the softest landings I have ever experienced we joined the queue for immigration control and things slowed down to stationary.  Chatting to others in the queue helped pass the 40 minutes or so and watching a few others get taken to a holding area for interrogation made us glad we had filled in our ESTA form on line.


The BA flights land at a satellite terminal and this means you collect your luggage there from the carousel (well actually it is on the floor by the carousel because whilst you were waiting in the queue for immigration it went round so many times it got giddy and jumped off the carousel).  Then you have to put your luggage on a conveyor belt so it can be beamed into the main terminal whilst you enjoy the jolly white knuckle ride on the mass transit system!  Things started to brighten up when, ejected at the top of the elevator, we were met by our son Daniel (all 6 foot 10 inches of him and easy to spot in a crowd).  It got even better when our two suitcases appeared on the carousel and I knew my fishing kit was safe.


Daniel advised us that we were not going straight to the house but to a music recital (just what you need after a 9 hour flight at what for us was 3 am).  Anyway he was behind the wheel so we had no choice. However it was delightful as it was the end of term recital featuring our 7 year old grandson Harrison who played the piano brilliantly.  In fact he was so confident that he got up and started to move away from the piano whilst still finishing the piece.  The piano teacher was so enthusiastic that I am thinking of asking if she has a class for old men!


Finally we made it to our US home from home and hit the sack.  The next day we were up bright and early and in action as the following pictures reveal. 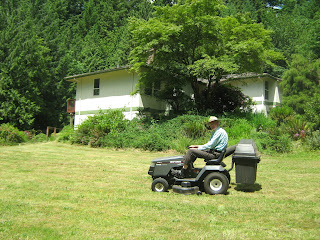 I got to cut all the grass 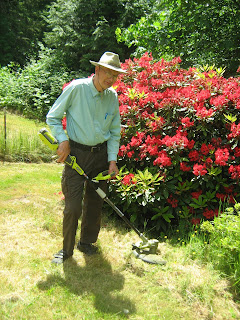 Then I got to play with the new strimmer which was amazing as it was battery powered and fairly light but it still had enough power to rip through the jungle!  The battery's charge lasted for over an hour thanks to the new technology that has been developed by Ryobi. I don't have any connection with the manufacturer but if I satisfied myself that the battery would work for several years I would recommend it unreservedly. 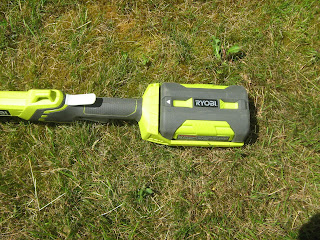 ﻿
﻿
The amazing battery!
After a lovely time at church today we took some of the children out for a drive to the spectacular Snoqualmie Falls - 270 feet high (10 stories higher than the Niagara Falls)! 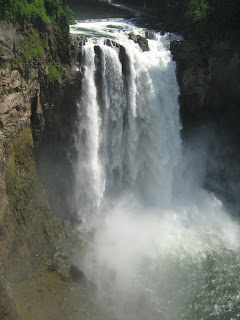 ﻿
I have got my fishing license and collect the hire car tomorrow.   Hopefully I will soon be fishing the Snoqualmie River so watch this space!