Fly Fishing Afternoon on the South Fork of the Skykomish

Well I met up with Lonnie at the Sultan "Park and Ride" and I parked and together we rode up towards Money Creek.  It was great seeing him again and catching up on what we have both been doing over the last 8 months.  He said we were targeting rainbows this afternoon. 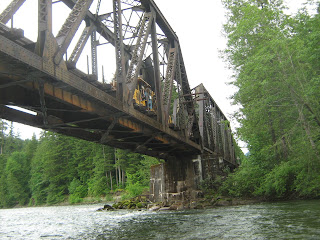 We could not get into our usual roadside trail because a rail track maintenance crew were very much in evidence so we parked at the camp ground in pouring rain and walked in.  Conditions could have been depressing as it was cool, wet and very cloudy, so the bugs were all staying un-hatched!  Also the water was at least a foot higher than we would have liked but it was crystal clear.  However, we were glad to be there. 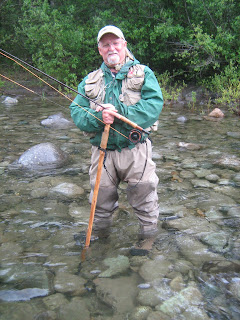 Lonnie geared up and ready to fish. 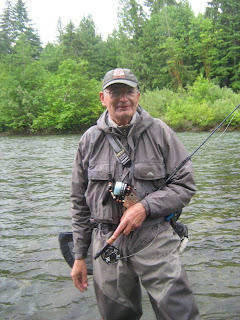 Yours truly enjoying the moment.
We fished nymphs under strike indicators through all the likely fish holding spots. 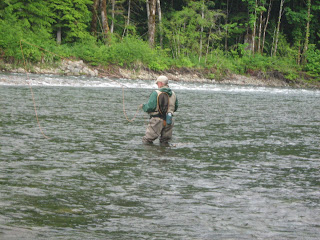 Having not had a touch we cut our loses and moved down river to a spot where you have to be quite brave just to get to the water.  No, it is not a rocky climb down but a struggle through thick jungle on an almost invisible trail.  On the way in Lonnie very kindly let me lead!
Well we tried real hard here fishing the seams and the mid river rocky structure with nymphs and strike indicators and then streamers to no avail. 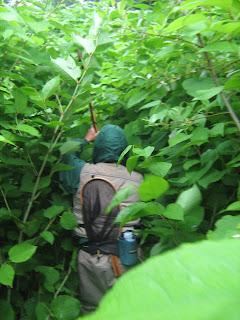 On the way out I let Lonnie lead and he nearly led us astray in the jungle! 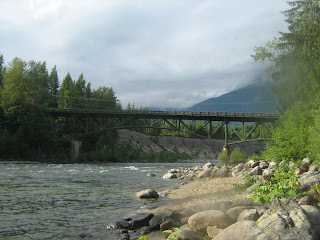 As we were driving back down we could see the steelhead brigade were out in force by the number of pickups parked up by the side of the road.  Lonnie kindly showed me some likely steelhead waters. 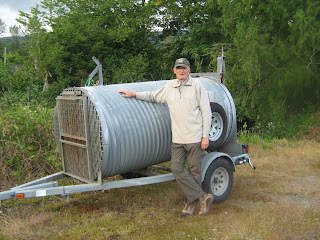 Then we popped into the Wallace Hatchery and I saw my first bear trap and the excellent poster display all about salmon and steelheads which I will feature in a later post. 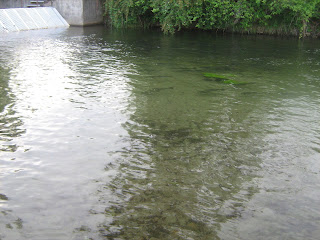 Finally I got all stirred up by seeing the huge fish in the pool waiting to be "processed" by the hatchery experts. You can just see a few in the shadow area.  They were huge!
Posted by Unknown at 05:28